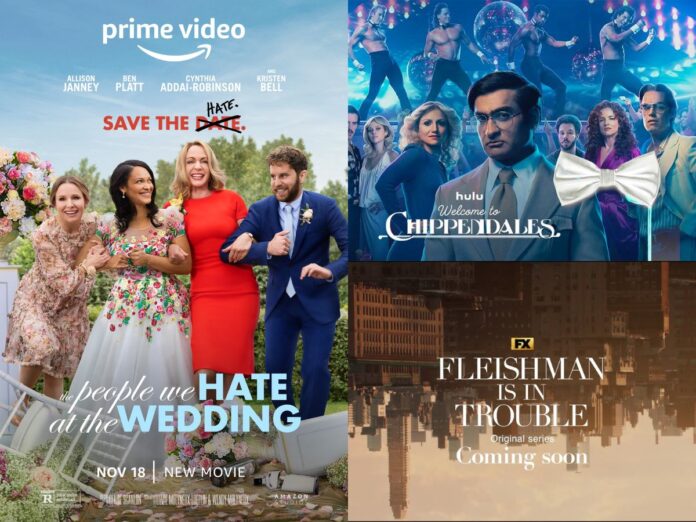 What to Watch Online in India in November 2022

1- The People We Hate at the Wedding

Coming to Amazon Prime on 18th November 2022, The People We Hate at the Wedding is a perfect movie to watch online in India for those who love a little bit of drama and romance in a comedy. The film will follow three family members who end up becoming the people we hate at the wedding when they travel to London for the marriage of their half-sister.

Ayan Mukerji’s directorial which is being hailed as the most advanced Indian superhero saga with its revolutionizing VFX. Brahmastra is coming to Disney+ Hotstar on November 2, 2022, and can serve as one of your guilty pleasures this month. Even though the movie got mixed reviews, it deserves to watch at least once. So, what are you waiting for mark the date of the online release of this film in India and watch it with your entire family?

This drama mini-series based on a true story is arriving on Disney+ Hotstar in November 2022. This is a perfect short series to watch online in India as it tells the story of an Indian immigrant, Somen “Steve” Banerjee, who becomes the unlikely founder of a male revue that becomes a cultural phenomenon.

Blockbuster is an upcoming sitcom arriving on Netflix India on 3rd November 2022. The series will follow the owner of the last Blockbuster in the USA, who must save his shop from closing down while facing stiff competition. Also, the camaraderie among the store workers is going to be exciting to witness. It’s one of the must-watch web series online in November in India.

After the huge success of Netflix’s original Enola Holmes, a sequel is arriving on the OTT platform on 4th November 2022. It will be about Enola Holmes’ first case as a detective. She will take help from her brother Sherlock in this investigation movie, which is surely going to be a riddle to crack until the end. If you like suspense thrillers, then you should definitely watch it online on Netflix India in November 2022.

Another miniseries that’s coming online in India on 11th November 2022 on Amazon Prime Video, The English stars the famous Hollywood actress Emily Blunt. The story of this web series is set in 1890s America. It will follow a woman who seeks revenge on the man she thinks is responsible for her son’s death. The trailer looks promising, and we expect it to be a binding crime drama. You should definitely add this to your list of what to watch online in India in November 2022.

Rajkummar Rao, Huma Qureshi and Radhika Apte star in this Bollywood movie that’s releasing on Netflix on 11th November 2022. It’s a thriller that’s based on a man who gets entangled in a seemingly perfect murder plot with unlikely allies. The trailer has left much to the imagination and makes us think about how the movie will actually unfold. It’s one of the most awaited movies on Netflix and a perfect choice for your list of what to watch online in India in November 2022.

8- Fleishman is in Trouble

This is an upcoming mystery drama mini-series on Disney+ Hotstar in India. The series will follow a 41-year-old man who dives into the world of online dating but is soon pulled back when he receives the news that his ex-wife has somehow disappeared from the face of Earth. Left with two children, he must discover what happened to his wife before everything starts to become problematic for him.

Hope you liked our list of what to watch online in India in November 2022. Share your thoughts with us via social media handles.

Previous article
33 Hot and Bold Photos of Soundarya Sharma, The Bigg Boss 16 Sensation
Next article
What to Watch on Netflix on the Remaining 9 Sundays in 2022
Virat Verma

Amazon Prime Video is updating its database by a ton and you will have to choose from among...
Entertainment

Kriti Sanon is a reputed actress in Bollywood's blockbuster and entertainment industry. She has significant roles in multiple...