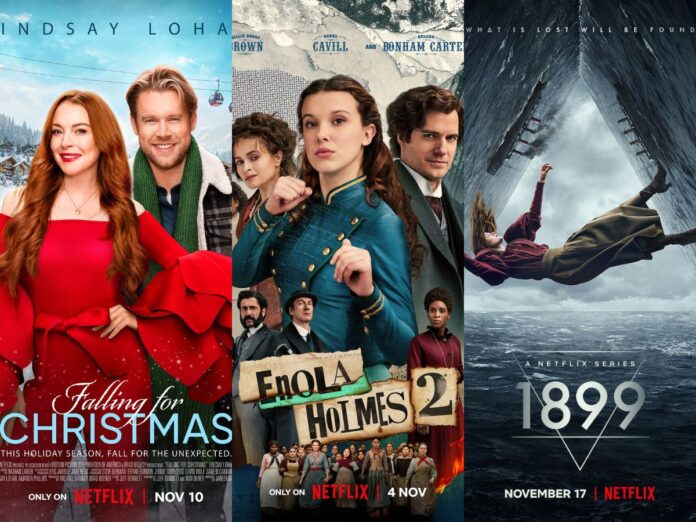 The month of November is approaching fast, and all of us want to know what the most popular digital streaming service, Netflix has in its store in the upcoming month. Every month tonnes of new movies and web series arrive on Netflix, but only a few of them can actually be considered watchable. Here we have included the upcoming Netflix movies and web series that we believe may be worth watching in November 2022. Without further adieu, let’s dive right in.

Framed for murder after uncovering a big conspiracy, an ethical hacker must evade law enforcement while finding out the real culprits and the ways to take them down.

After the Dahmer story, Netflix is coming back with another true crime documentary in November 2022. It will follow a bodybuilding couple’s rocky marriage, which ultimately resulted in a death on Valentine’s day.

A video shop owner must fight the fierce competition and complicated feelings to have the last Blockbuster open. It is an upcoming sitcom on Netflix in November 2022.

A horseman must sacrifice his life after his king dies to serve the ruler in the afterlife. However, tragedy struck before that, and everything drastically changed. It’s a dramatic movie.

After the great success of Enola Holmes original film, Netflix has announced Enola Holmes 2, which will follow the titular character on her journey of solving her first case as a private detective.

Four best friends in the world of the fashion industry must face challenges and deal with their personal lives to thrive. It’s an upcoming South Korean drama on Netflix in November 2022.

7- Orgasm Inc: The Story of One Taste

Another shocking documentary that’s making its way to Netflix in November 2022. It follows a sexual wellness that gained famed with its “orgasmic meditation” — until members come forward with disturbing allegations.

Jules takes the responsibility of being the new Santa Claus after his grandfather retires from the job. He receives a letter from a girl with a special request that he must fulfil. This is one of the upcoming Netflix movies in November 2022.

Season 5 of The Crown will dramatise the events surrounding Princess Diana and the controversies that came out when she entered the Royal House.

This upcoming romantic comedy will follow a rich spoiled heiress who loses her memories and falls into the care of a down-on-his-luck widower and his daughter during Christmastime.

It’s an upcoming romantic thriller on Netflix in November 2022. The movie follows a man whose girlfriend suddenly breaks up with him. He then has to confront what he has long ignored.

A man hoping to get rich soon gets entangled in a perfect murder conspiracy with unlikely allies. This is one of the most awaited Netflix Hindi movies in November 2022.

Five strangers down on luck must unite and fight together a wicked mafia boss to get hold of a lottery ticket and turn their fortune around. It’s one of the upcoming comedy movies on Netflix.

This upcoming Netflix web series is a thriller set in 1899. An immigrant ship headed for New York gets its route changed, and then a mind-bending mystery starts to unfold.

The hit Netflix thriller series is returning with another banger of a season. The Spanish show will continue its storyline set in an exclusive school.

This upcoming Netflix drama movie will follow the journey of two sisters from war-torn Syria to the 2016 Rio Olympics. It’s an inspirational story.