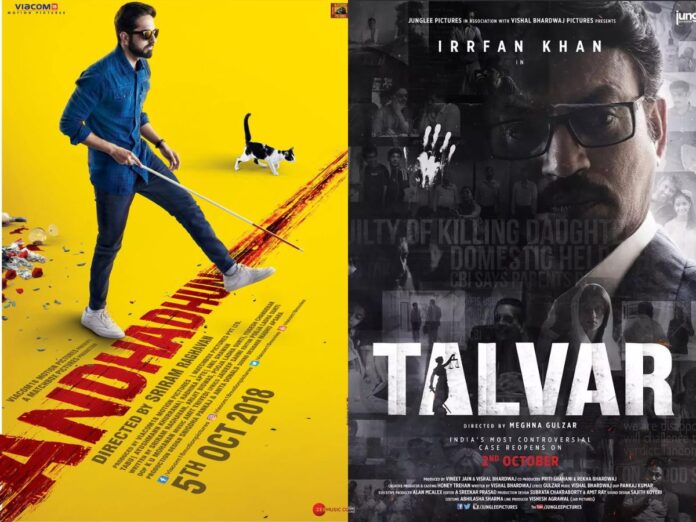 Watching a good Bollywood murder mystery in a cozy atmosphere at home is always a treat. Murder mysteries have always fascinated viewers due to their intriguing plot that tends to reveal something starky and serious at the climax. Now, these murder mysteries are streaming on digital platforms such as Netflix and Amazon Prime Here we have covered the best Hindi murder mystery movies that can surprise you with twists and turns.

Starring Sidharth Malhotra, Sonakshi Sinha and Akshaye Khanna, Itteqfaq is an edge-of-the-seat thriller. A writer and a homemaker becomes the prime suspect in a double murder and also the only witnesses as well. It’s up to a dogged detective to find out the truth. You can stream this Hindi murder mystery movie on Netflix.

Based on the Arushi Talvar murder case that haunted the Indian juridical system and still remains one of the most talked about and intriguing cases ever. Talvar is a fascinating film as it uncovers the hidden truth behind the murder and exposes the real criminals who evaded the law due to the carelessness of police. It’s one of the best Hindi murder mystery movies on Netflix.

Emraan Hashmi, Rishi Kapoor and Shobhita Dhulipala star in this crime drama that is based on a Spanish thriller. The film follows a detective who is on the hunt to find out the mystery behind the disappearance of a body from the morgue. This Hindi murder mystery movie is also streaming on Netflix.

One of Aysuhmann Khurrana’s best film ever, Andhadhun is a must watch for the people who love the murder mystery genre. It follows a visually impaired pianist who somehow finds himself at the murder scene of a celeb and ends up getting entangled in a mystery that will definitely startle you. It can be viewed on the Netflix.

5- The Girl On The Train

Anotehr recently released Bollywood murder mystery movie that follows a troubled woman who ends up getting involved in a crime after trying to observe a couple from behind the scenes. Parineeti Chopra, Aditi Rao Hydari and Kirti Kulhari feature in this drama. You may watch it on the most popular OTT platform Netflix right now.

A critically acclaimed Hindi murder mystery movie that remains quiet underrated despite pulling off a great storyline. The film is based on an actual story which makes it more harrowing and interesting. In the 1980s Bombay, a serail killer starts to target the street dwellers and a suspended cop tries to solve the case on his own without the help of police department. It is streaming on Amazon Prime Video right now.

Kay Kay Menon, one of the most underrated Bollywood actors plays the role of an investigative office in this movie. He tries to solve a series of murder which took place in Manali in a single night. He connects the dots to a night club named Vodka Diaries. It’s one of the best Hindi murder mystery movies to watch on Amazon Prime Video.

This one is a unique murder mystery in the midst of all the investigative dramas that we have listed. The case here unfolds at a private hospital. It is also based on a true story. A senior doctor’s carelenss results in the death of a young child. The mother of the deceased child then fights a case against the veteran doctor with the help of an intern. You may watch this Bollywood murder mystery on Amazon Prime right now.

Jalsa starring Shefali Shah and Vidya Balan is a crime drama that defied expectations and gained a cult following after its release. This murder mystery deals with the aftermath of a hit and run case that is actually much more than what appears at the front. It is one of the best Hindi murder mystery movies on Amazon Prime Video.

Sharman Joshi, Sana Khan and Zarine Khan star in this sensual murder mystery that follows a hooded vigilante who broadcasts live murders on the news channel. Will the police be able to catch him before his series of murder reaches a huge number. It is also streaming on Amazon Prime Video.

Have the weekends gone back to being shut away from the world, cooped inside your room? Don't sweat...