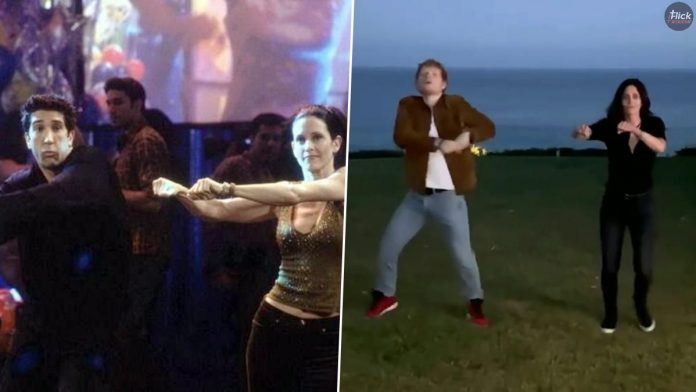 It seems that the craze for Friends: The Reunion with our favorites Courteney Cox, David Schwimmer, Matt Leblanc, Matthew Perry, Lisa Kudrow episode will last for a long period of time as this was the most awaited episode that was made on-demand and fans were desperately waiting for it. Even, many die-hard fans have started watching it again as they are not done with the show yet.


How could they not be watching the special episode again of the show, that has taught the importance of friends in life, friends are always there to support you, will give you a shoulder to cry in your tough times, will make you realize how much special you are and understands you better than anyone else.

Well, fans were disappointed as they were expecting Monica and Ross to do Routine Dance one more time for its lovely audience, but that did not happen. The complaint was genuine from the fan’s side because in the episode “The One With The Routine” in the original show, both Monica and Ross performed The Routine Dance and it was very well-liked by the audience, later it became famous too.

But when fans didn’t see the stars performing in the special episode as it was a highly demanding request, fans got upset and disappointed. But worry not, because Courteney Cox and worldwide famous singer Ed Sheeran have re-enacted it for you.

Cox posted a video on her Instagram profile where she and Ed are redoing the exact steps but the only difference is that this time you will be seeing Ed Sheeran instead of David Schwimmer. Cox didn’t mind captioning the post by saying “Just some routine dancing with a friend… @teddysphotos #ReRoutine.”

Ross Geller and Monica Geller’s  iconic routine dance is one of the most rememberable moments from Friends. However, they didn’t recreate it, even though it was a special demand from the audience. Friends: The Reunion director Ben Winstow gave a reason that why The Routine was not a part of the show.

He said, “I did say, ‘Would you ever consider doing The Routine?’ And both (Courtney and David) of them were like, ‘Oh, please don’t make us do that.’ There were certain things I really cared for like the table read or the quiz. I also couldn’t work out where it would have worked. I’m not sure it would have landed 20 years later. But it was definitely on my list of ideas that I pitched.”

About Friends: The Reunion Special Episode

This episode is also titled “The One Where They Get Back Together” and it was telecasted on HBO Max on May 27. In India, the special episode got a release on the ZEE5 platform. It was an unscripted episode in which the main cast was acting themselves and the main characters of the show were featured – Jennifer Aniston, Lisa Kudrow, Courteney Cox, Matt LeBlanc, David Schwimmer, and Matthew Perry, along with star guests.

Along with the main cast, celebrities like David Beckham, Lady Gaga, Maggie Wheeler, Malala Yousafzai, BTS, Justin Bieber, and others were invited as special guests on the special episode. The show is a worldwide hit as many fans watched it.


If you haven’t watched it yet, then what are you waiting for, land on ZEE5 now to watch the complete episode.

Trending Instagram songs are too much fun to miss out on while creating entertaining reels that you think...
World News

Facebook Inc. is offering monetary benefits to anyone who joins in their latest program and deactivates their social...
Technology

Instagram and Facebook are the backbones of Social media, they have been around such a long time that...
Technology

Instagram is a leading social media platform. The pandemic has pushed its success rate many bars higher and...
World News

Facebook Inc. is offering monetary benefits to anyone who joins in their latest program and deactivates their social...
Entertainment

Trending Wedding Audios for Instagram Reels: Here in this article, we have covered the latest and most trending...
Entertainment

There has been quite a buzz about the possibility of a new friend's movie from the time Jennifer...