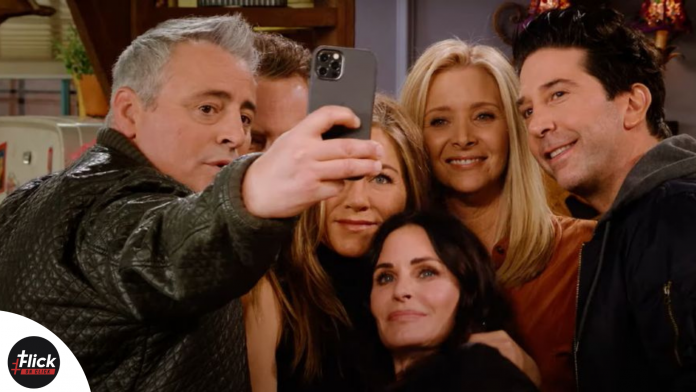 The Friends Reunion show is released today and is now available for streaming over at Zee05. If you have been a true fan of the show then you can go and start watching now but if you’re someone dicey on watching the same and want a Friends Reunion review, then stay and we’ll tell you everything that you need to know before watching. Shh… We’ll not give you any major spoilers.


Now, one more warning, if you’re someone who hasn’t watched the complete series and still following the buzz for the Reunion then be sure that it’s not for you. The reason being that it is not a movie telling you what happened in the life of the characters but rather a special event where all the 06 gathers.

After waiting for almost 2-3 years since the demand of having a Reunion rose up, it’s finally out, Courteny Cox, Matthew Perry, Matt Leblanc, Lisa Kudrow, David Schwimmer, Jeniffer Aniston will be seen together after so long and let’s see some of the things that you should know about the same.

Starting with the first thing, it’s the second time all the 06 cast members are living together after the show ended. So, you being a Friends fan, you can expect how much of a rare occurrence is that.

The show had its moment starting from the time when all the six entered the stage with James Corden, host of the Late Late Show With James Corden to moments where we cried after listing to tear-jerking stories.

Then there are stories from Friends from the viewpoint of special guests like BTS, Kit Harrington, Malala Yousfzai, David Beckham, and more. They all had one thing in common and that’s how Friends change their life. Each one has their own set of stories for the Friends Reunion Cast and we’ll we were more than happy to hear them all.

Moreover, James went on with the show as they appeared on Stage 24, the original set for Friends show. It is to be noted that the set has been opened for public view long ago due to the large demand from Friends Fans.

While among all 06 of them, we might have missed a little bit of Chandler Bing as Matthew Perry was a little quiet during the whole show, the other 05 showed full enthusiasm.

Starting from the stories related to ‘Brad Pitt’, Marcel the monkey and more were unraveled. It felt like discussing fan theories with the real cast and for a difference, getting to know the real truth behind the scenes.


There were games, stories, visitation to the old set, and reviving of memories buried deep down. It was such a refreshing watch and if you’re a true Friends fan then you would thoroughly enjoy the whole experience close to having a total of 2 hours runtime.

Finally, on the question that would there be a movie or something in continuation from the series, we get a very good answer and it was a firm no. But it could be betterly explained in the words of Lisa Kudrow “I don’t want anybody’s happy ending unraveled.”

The most trending OTT platform ‘Netflix’ added another rom-com movie in its stock with the title “Tuesdays and...