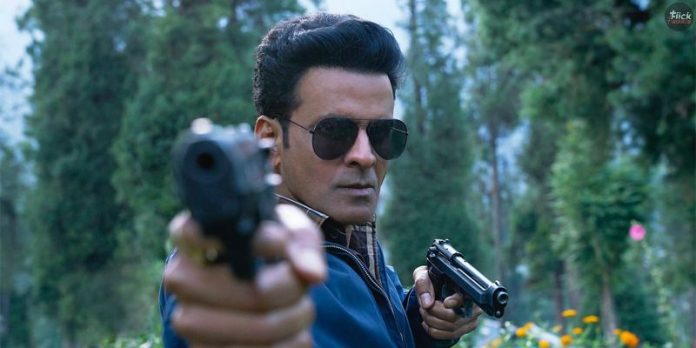 To refresh your memories of the first season quickly, we have prepared a list of the best scenes from the first season of ‘The Family Man’ so that its die-hard fans could enjoy thoroughly. From comedy to action, drama to thriller here is a tribute to the most Masterful and Memorable show.

Manoj Bajpayee aka Srikant Tiwari is seen attending a meeting with the school principal and discussing Dhriti (Srikant’s daughter) concern. But in the middle of the discussion, Srikant receives four consecutive messages from JK that “PRISONER ESCAPED.”

This made Srikant nervous as this was a huge mishap and made an excuse that JK is about to suicide from the rooftop so that he can skip the conversation. The principal threatened him that she would expel her daughter for this behavior, but he still marches outside the school searching for the escaped prisoner.

In this scene Srikant is chasing a man who has escaped from his clutches, sooner Srikant slows down as he couldn’t keep up with his speed and gets exhausted and stops to catch a breath. Being a spy, he uses his sharp mind and stops a lady riding a two-wheeler by claiming that the man has stolen his wife’s ‘Mangalsootra.’

This is an emotional excuse that always works like a spell on Indian ladies as ‘Magalsootra’ is a necklace that has its importance in Indian marriages. In Srikant’s case, this spell worked and the lady offered him a seat and started chasing the running man.

While chasing, Srikant used some cuss words which might be funny for the audience but in the scene, the lady was embarrassed to hear those words which made it funnier.

Priyamani aka Suchitra Tiwari, w/o Srikant Tiwari, who is also a working woman, leaves for Lonavala for an important meeting and the meeting went fantastic for Suchitra as she was the speaker and later her team had a celebration.

But still, she wasn’t happy as she was dealing with her marriage tension with Srikant as everything was falling apart between them. On the day of celebration night, Suchitra was feeling alone and texted her friend/colleague Arvind who was staying in the same hotel, if he is still wake up.

And the question mark is still there that what happened in Lonavala. If you want to know then you have to watch the episode.

Srikant is buying groceries from the departmental store along with his children and his son picks a packet of sanitary pads. Srikant tells him to keep it back but Atharv believes that the pads are some magical resources that help in relieving stress from females and make them energized. This explanation of Atharv will make you laugh, after all, he is a child who is not aware of its usage.

Srikant tells him to shush and move forward from the pads section, but his annoying daughter questions him, what is wrong with telling Atharv the truth and lectures her father that what is the problem in telling his son about the pads.

To catch a terrorist who is armed and hiding in a storeroom, Srikant decides to enter the door by dropping his guns and ammunition on the ground and takes Ganapati Bappa’s name before marching forward. Slowly he makes his way into the storeroom and closes the door.

While his team is freaking out if something happens to Srikant and bravely Srikant made his way inside. To know what happened next, then you have the watch the episode.

Srikant starts spying on his wife Suchitra as he believes she has changed a lot after switching to her new job because Srikant has never been used to see his wife meeting and spending time with his colleagues.

To know the truth, he follows her to the beach café along with JK, meanwhile, JK consults him that his mind has got twisted and toying with him. Still, Srikant is suspicious and wants to know what type of relationship Suchitra is sharing with Arvind.

Frustrated Srikant enters the home at night after getting drunk and tries to make a scene with his wife Suchitra regarding where their relationship is heading. Both husband and wife do not understand each other and the argument later made Srikant realize that he is a loser and starts calling himself a loser because he is continuously keeping his family together.

Being a responsible father, Srikant was following the same routine, that is, dropping his children to school, but a biker breaks his car’s side-view mirror at the traffic signal. Srikant shuts his mouth and controlled his anger for not giving rise to a road rage fight in front of his children.

But the biker couldn’t stop his rage as he heard what Srikant said to him and starts arguing with him to repeat the cuss word loudly. After everything got settled down, Atharv scolded his father for being a scaredy-cat and on his father’s behalf, he said those cuss words to the biker.

Srikant immediately pulls his car windows up and pressed his accelerator as the biker was in a bad mood this time.