Want to watch something that's not boring and repetitive? Here is a list that will help you choose the most engaging movies and web series on SonyLIV. 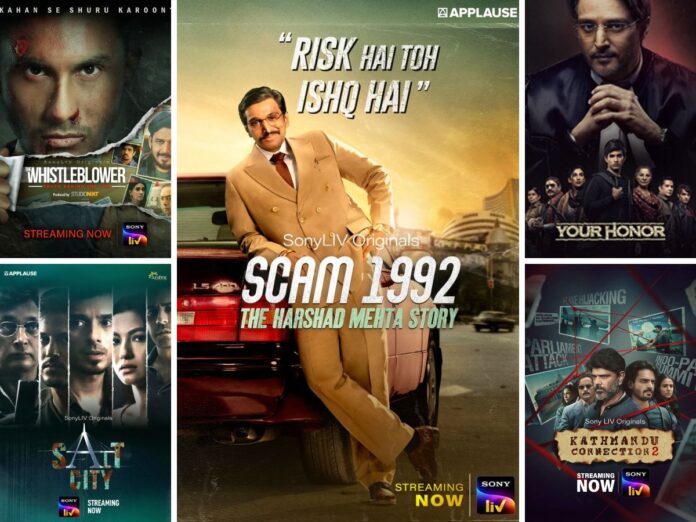 No matter what genre you’re in the mood for, there’s always something good playing on SonyLIV. The streaming service has an impressive selection of movies and web series, including both hits and hidden gems.

In this article, we’ve rounded up the 20 best movies and web series on SonyLIV that you can binge-watch right now.

From crime thrillers to romantic comedies, there’s something for everyone on this list. So here are the 20 Best Movies and Web Series on SonyLIV to Binge Watch!

The SonyLIV web series Scam 1992 is a great way to learn about the origins of the stock market game, particularly in India. This financial thriller follows Harshad Mehta, a stockbroker who attempts to bring the Indian stock market to its peak. However, as he starts to climb higher and higher, he faces increasing pressure and roadblocks that eventually bring him down. The series has become one of the most-watched web series on SonyLIV because it provides an accurate portrayal of Harshad Mehta’s dynasty and the Indian stock market scam.

Gullak Season 3 is a powerful commentary on the struggles of middle- and upper-class families in India. It expertly highlights the politics of the home and outside, patriarchal norms, and other aspects of life in India. The story visualization is top-notch and truly brings the story to life.‍ Don’t forget to watch Gullak Seasons 1 & 2 on SonyLIV.

SonyLIV Undekhi is a crime thriller web series set in Manali. The plot revolves around a wealthy, powerful family who tries to cover up their wrongdoings but eventually gets caught and must face the consequences.

Girls Hostel Seasons 1 & 2 are now available on SonyLIV. As the season progresses, the girls accept each other’s way of thinking and living. They are suddenly interrupted by an event that doesn’t favour their college mates, and they have to demand their rights in a fair election. Watch Girls Hostel Season 3 now to find out what happens next.

SonyLIV critically acclaimed web series, Rocket Boys, tells the story of Homi J Bhabha and Vikram Sarabhai, two Indian pioneers who launched a rocket in the late 1990s. This series is a must-watch for any fan of Indian engineering or history. Jim Sarbh does an amazing job portraying a young Vikram Sarabhai. Don’t miss out on this incredible series – watch Rocket Boys on SonyLIV now!

Nirmal Pathak Ki Ghar Vapsi follows the story of a young man who is searching for his roots. He eventually discovers that the village he was born in is exactly as he left it. This show has resonated with viewers because of its realistic portrayal of village life and the raw emotions conveyed throughout.‍

Chutzpah is a series of five interconnected stories that explore the complexities of life. The characters are relatable and often quixotic, making for a captivating watch. Whether you identify with the person struggling in a complicated relationship or the one who’s completely obsessed with the internet, Chutzpah is sure to keep you entertained. Unlock these 5 characters now by watching the series.

Maharani is a political drama set in Bihar in the 90s. It stars the versatile actress Huma Qureshi. Although it is a fictional series, it contains many real-life incidents. All the actors do an excellent job of arousing the audience’s curiosity and anticipation. You can watch both seasons of Maharani on SonyLIV.

Salt City is a gripping web series that has captured the attention of viewers with its compelling story and cast. Featuring the Bajpayee family, the series follows their everyday struggles as they grapple with different complexities in life. It also sheds light on their past while staying rooted in the present and facing an uncertain but hopeful future. If you’re looking for an engaging series to watch, look no further than Salt City.

The Tamilrockerz web series on SonyLIV provides a fascinating look into the world of cybercrime and the piracy scam that has long been a thorn in the side of the film industry. The 8-episode series is based on a real-life piracy group that has been making headlines for over a decade and follows the efforts of law enforcement and cyber experts as they try to track them down. The show ends on a cliffhanger, leaving the door open for a possible sequel.

Manish is an entrepreneur who struggles to make ends meet. He’s under a lot of financial and personal stress, and he’s desperately trying to find a way out. When he’s given the opportunity to kill a young girl for money, he takes it. But things quickly become complicated when Manish discovers that the girl is the daughter of a powerful politician. His wife must decide whether greed is more valuable than human life.

The SonyLIV web series JL50 features Abhay Deol and Pankaj Kapoor as CBI officers investigating a plane crash. They soon discover that the plane crashed in northern Bengal after departing from Kolkata airport. This sci-fi thriller is full of suspense and will keep you entertained throughout.

This SonyLIV web series is all about nostalgia and remembering your first college romance. It’s a unique story that will resonate with anyone who’s ever been in college. The series follows three best friends as they search for love, good memories, and meaning in their college years. Tune into SonyLiv now to watch seasons 1 & 2 of the College Romance.

14. Avrodh: The Siege Within

Our next recommendation is the perfect way to get patriotic. The plot of Avrodh: The Siege Within revolves around the assassination of a militant based on a surgical strike. It’s packed with gripping action, raw emotions, and other elements that will give you a new perspective on war. Watch both seasons of this show on SonyLIV.

The Whistleblower is a web series that tells the story of a final-year medical student who becomes embroiled in an admission scam. The series is based on true events that took place in India. Ravi Kisan plays an important role in the series. The Whistleblower is one of the most popular web series on SonyLIV.

On April 6th, 1917, an infantry battalion was in the midst of a fierce battle behind enemy lines. Two brave soldiers, Lance CPL. Blake and Lance Cpl. Schofield was given a nearly impossible mission: to cross over into enemy territory and deliver a message that could save 1600 other soldiers. 1917 is an excellent historical war film available on SonyLIV, and fans of the genre will not be disappointed.

Your Honor is a highly recommended series on SonyLiv. It tells the story of Bhishan Khosla, a man caught in the middle of a hit-and-run incident, and his struggle to stay alive as the son of a local mafia boss. The series is packed with action and suspense and is definitely worth watching. Watch seasons 1 & 2 of this show only on Sony Liv.

Jersey is a SonyLIV movie that follows the story of Arjun, a talented but failed cricket player. Despite being in his late thirties, Arjun remains determined to make it to the top of his game. This passion is reignited by his son, who wishes to see his father succeed. Will Arjun be able to make a comeback despite everyone’s doubts? Jersey is an inspirational movie that you won’t want to miss.

Kathmandu Connection gives audiences a look at the 1993 Bombay Blasts from different perspectives. The multiple twists and turns throughout each episode make the series thrilling to watch. Despite mixed reviews, the strong performances from the cast make Kathmandu Connection worth watching.

Tanaav is an adaptation of the Israeli series Fauda. The thriller is directed by Piyush Mishra and offers a complex and engaging plotline. Set in Kashmir, the web series revolves around a special unit and deals with intense emotions such as love, betrayal, and revenge.

Let us know which one of the best movies and web series on SonyLIV is your favourite.

Do you wanna grab your popcorn and watch a film that takes you from the boredom and monotonicity...
News

The Ministry of Home Affairs has nodded on to reopen cinema halls, movie theatres, and gyms in the...