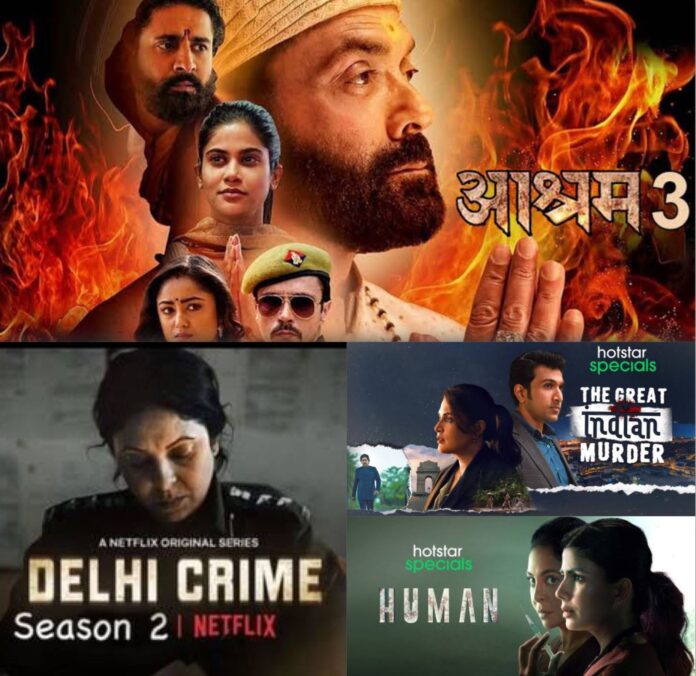 Major OTT platforms have repeatedly hired Indian filmmakers to create fascinating and compelling content for the audience to watch. With the thriller category being one of the most popular and viewed, our Indian artists have hit home runs with their plots. Similarly, in Bollywood, a few producers created a Hindi crime thriller web series and show in 2022 that was well accepted by the audience. If you appreciate viewing the genre, check out these Hindi crime thriller web series to stream in August 2022.

Shefali Shah is back as a tough cop pursuing revenge for victims. DCP Vartika Chaturvedi and her colleagues will seek to investigate another heinous crime this time. Apart from Shefali, Rajesh Tailang, Adil Hussain, Rasika Dugal, and Gopal Datt play important parts in Delhi Crime season 2. The detective drama will premiere on August 26.

Vipul Amrutlal Shah directs this Indian drama series. It highlights the sensitive side of doping tests in India and the realm of medical frauds and is one of the most popular Hindi crime thriller web series on OTT. The show delves more into the lethal relationship that exists between pharmaceutical firms, private clinics, and government leaders. Shefali Shah, Kriti Kulhari, Vishal Jethwa, and others play major parts in this series. Watch this show to learn some shocking facts about the medical industry.

This supernatural thriller, produced by Mukul Abhyankar, stars Mithun Chakraborty, Shruti Hassan, Arjan Bajwa, Gauhar Khan, and many others in major roles. This terrifying show is about a writer who suffers from writer’s block and meets a young writer. He utilizes her tale for his next work because he is desperate for a fresh narrative. Things take a turn for the worse when he learns someone is attempting to ruin him. This is a must-see Indian thriller series.

This Hindi series is a mental and emotional thriller based on the British serial Luther. The drama, which stars Ajay Devgn, Raashi Khanna, and Esha Deol in prominent roles, can take you on an exciting ride. The plot revolves around vigilante superhero police officer Rudra Veer Singh’s voyage through the weave of psychopath brains in Mumbai’s crime-ridden neighborhoods.

This OTT Hindi crime thriller web series is about how allowed and unwanted attendees at a party become the primary culprits when a famous industrialist is murdered.  Ashutosh Rana, Pratik Gandhi, Richa Chadha, and others star play a major role in the series, and it is directed by Tigmanshu Dhulia. Watch the program for a fascinating crime-solving adventure.

This Hindi crime thriller web series follows a small town teenager whose life is flipped around as he is aggressively pursued by the daughter of a local politician who is madly in love with him and intent on making his life miserable because he loves someone else. Tahir Raj Bhasin, Anchal Singh, and Shweta Tripathi play the lead characters in the show.

After falling in love with Bobby Deol’s baba Jaane Mann ki Baat and Ek roop maha Swaroop persona, it was inevitable for the audience to be curious about what happened next in the lives of Babita and Babaji, who is operating his own horrible business in his ashram.  Things in the ‘ashram’ become murkier as Pammi continues to plead for her rights in vain. The third season also features actress Esha Gupta, whose moments with Bobby Deol set everybody’s screens on flames. MX Player allows you to watch this crime thriller web series for free.

This thriller Hindi web series, featuring the diva of Cinema, Madhuri Dixit, is worth seeing for its splendor and charm. Crime dramas are notoriously difficult to crack, and this production, created by Bejoy Nambiar and Karishma Kohli, appeared to be no surprise. Regardless, see the show for the wonderful cast. When India’s most beloved starlet goes missing, the hunt whittles away at the beautiful veneer of her life and relatives, uncovering heartbreaking truths.

Darlings Alia Bhatt’s debut film features her as an angry wife. Shefali Shah and Vijay Varma also appear alongside the superstar. Darlings centers around Alia’s Badrunissa, who takes revenge on her hubby’s (Varma’s) inappropriate behavior by subjecting him to the same torture. Shefali plays Badrunissa’s mother, who encourages her and assists her in taking her husband captive. Darlings appear to be an intriguing picture with some outstanding actors based on the trailer. Vishal Bharadwaj scored the film’s music, and Gulzar wrote the lyrics.

Maharani, the political crime thriller Hindi web series, is going to return with a new chapter. This time around, fans will witness a power struggle between CM Rani Bharti (Huma Qureshi) and her hubby Bheema Bharti (Sohum Shah), who was forced to relinquish his position as CM after being wounded in the first chapter. Maharani season 2 will be available to stream on sony LIV on the 26th of august.


Read More: Bollywood comedy movies in 2022 that will lighten your stress and make you happy

Horror web series in Hindi are available in a limited quantity on OTT platforms and are almost quite...