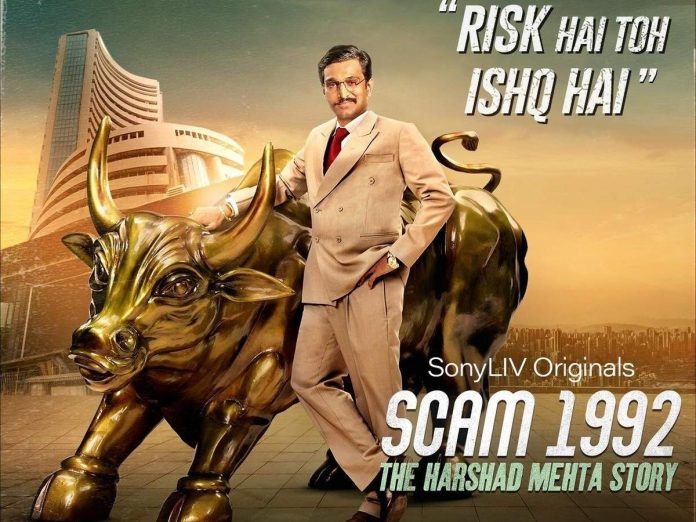 Well! The story introduces Harshad Mehta’s story of rags to riches and to downfall, exactly the same way as we’ve already seen before. You’d get to see the glorification of the antagonist character and also, there would be some sticking dialogues that are used to give the character a larger than life appearance but would surely make even the real Harshad Mehta Laugh.

For example, one of the most used dialogue is ‘Risk Hai Toh Ishq Hai’ making no sense at all, and well! It would have surely swayed away from the connections of the real Harshad Mehta if he would have used it in real life.

Moving on, the Harshad was given titles like ‘The Raging Bull’, ‘Cheetah’, ‘The King Of Dala Street’, or the one he prefers the most Amitabh Bacchan of Dalal Street. All this is neatly portrayed in the binge-worthy 10 episode series.

That being said, the story only gets interesting as we’ll see how a man from the Chawl raised to a power, all by himself and using his brains. He is shown as a character who is quite small but wants to play in the biggest of the leagues, which he later did.

Surprisingly, the character analysis is left for the audience to do. The reason being that he was not portrayed as evil or good, just simply a man with a dream and a little crooked nature where he is ever ready to play a underhanded move.

Now, the Harshad Mehta story takes a turn when he along with his brother Ashwin and trusted aide Bhushan gets to know about the Securities business. With the dream to make it big, they started scheming their scam and eventually got way too successful.

Like the Wolf of the wall street, Harshad had to face downtime as well. Now, a man of such power has very strong enemies and for him, it was friends from his own cartel only.

The first report that of any such happening was handed down to a journalist Sucheta Dalal via a contact sent by the ‘cartel’ only. Which later became the reason for the downfall due to which Harshad, later on, got charged with 70 criminal cases and 600 civil cases in the court of law.

Also read- How to Get Free Subscription of Zee5 Premium, SonyLiv, and Voot

The series is quite interesting as it is derived from real-life story of a real person who took his last breath while he was in jail after seeing the richest of the rich things. The story is scripted or based on the book by Dalal and Debashis Basu, The Scam: Who Won, Who Lost, Who Got Away, and Sucheta gets a leading part.

Do give it a try and leave a comment down below, telling us on a scale of 1 to 10, how much you are satisfied with the Review of The Harshad Mehta Story by Flickonclick

Koi Jaane Na Review: Its better To Watch on The OTT Platform Rather Than Inside of a Theatre

Koi Jaane Na Movie Review- The story of this thriller and mystery movie goes like this – A fictional...
Entertainment

Demand for Hindi dubbed web series continues to rise, with many OTT platforms now functioning in India. These...
Entertainment