College Romance is back with another season of fun, light-hearted comedy and relatable romantic drama that we adored in the first two seasons. College Romance 3 has just started to stream on SonyLIV, and we have already found quite a few reasons why you should watch the rom-com web series.

Here are the 8 reasons that make us believe everyone should watch College Romance 3:

Who doesn’t miss their college life once it’s gone for good? Well, those days can’t come back, but you can experience the feels of those good old days with College Romance 3. It has all the drama, fun and thrill that you may have experienced in your college life.

The show itself is named College Romance, and rightly so cause it packs the love and romance that we all crave. From the long-distance relationship to the hardships of accepting and letting one go for their good. The web series has it all.

College Romance is known for its on-point comedy, and the third season of the web series does not disappoint in this department. You will once again love the punchy lines, unexpected fun moments and obviously Bagga’s unmatchable humour.

Apoorva Arora, who plays Naira in the web series, has recently said that the cast members have so intermingled with each other that they have crossed almost all the boundaries and nothing between them is hidden. It’s really visible in their on-screen chemistry with each other. 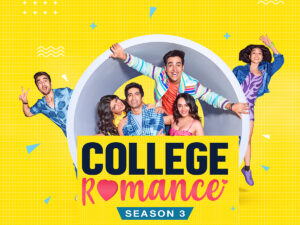 Bagga was not even the main character when the show actually began airing. The first season of the web series was more about Trippy, Karan and Naira than anyone else. However, Gagan Arora breathed life into this character to make it one of the most loved things about the show. Hence, in season 3, he is leading the cast, and we could not have been more happier for him. Bagga’s character development is just done so right that we have to include him as a reason itself to watch College Romance Season 3.

6- The Mystery With Trippy

Trippy played by Manjot Singh, is not included in the main cast of the web series. However, there are references about him made in the trailer, and we were really curious about what the show is going to reveal about him. Glad to say, we were not disappointed, and you won’t also be.

Friendship was always at the heart of College Romance. Without it, the show won’t be what it is today. College Romance Season 3 is again focusing on the various aspects of friendships and will make you cherish the bonds that you have made throughout your life.

Even though the web series takes a light-hearted tone, it depicts various challenges and obstacles one might face. From long-distance relationships to the fragility of friendships, at some points, the show has it all that makes it highly relatable.

TVF released a new mini-series – TVF Aspirants, a month ago and it has already won millions of...
Entertainment

The Girls are back for one last fashion closet gala, The Bold Type, starring Katie Stevens, Meghann Fahy...
Entertainment