From heartwarming dramas to action-packed thrillers, there’s something for everyone on this list. Get ready to watch some of Bollywood's biggest blockbusters! 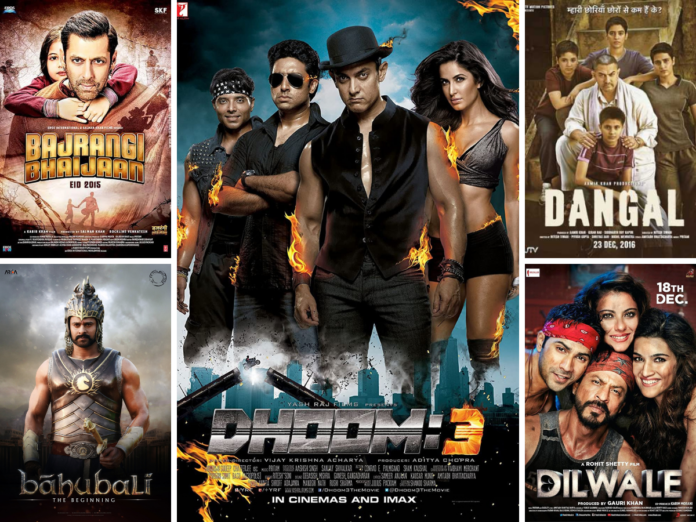 This sports drama follows the story of Mahavir Singh Phogat, a former wrestler who trains his daughters to become wrestling champions. It’s a heartwarming and inspiring movie with strong performances from Aamir Khan and Sakshi Tanwar.

This epic action film follows the story of a prince who must reclaim his rightful place as the ruler of a kingdom. It’s a visually stunning and action-packed movie with superb performances from Prabhas and Rana Daggubati.

This science fiction comedy follows an alien who arrives on Earth and tries to understand the complexities of human behavior. It’s a thought-provoking and entertaining movie with a memorable performance from Aamir Khan.

This crime drama tells the story of two rival families in Wasseypur, a town in the Indian state of Jharkhand. They fight for control of the local coal industry. It’s a gritty and intense film with strong performances from Nawazuddin Siddiqui and Manoj Bajpayee.

This historical drama is based on the legend of the Rajput queen Padmavati and her husband, Maharawal Ratan Singh. It’s a visually stunning movie with great performances from Deepika Padukone, Ranveer Singh, and Shahid Kapoor.

This romantic comedy follows the love story of Raj and Meera, who are brought together by fate after being separated for many years. It’s a fun and entertaining movie with Shah Rukh Khan and Kajol reuniting after many years.

This action thriller follows the story of a master thief who uses his skills to pull off a series of high-stakes heists. It’s a fast-paced and exciting movie with outstanding performances from Aamir Khan and Abhishek Bachchan.

This heartwarming drama follows the story of a kind-hearted man who helps a lost Pakistani girl find her way home. It’s a feel-good movie with an epic performance from Salman Khan.

This biographical drama tells the story of actor Sanjay Dutt, who struggled with drug addiction and legal problems throughout his career. It’s a poignant and moving movie with a magnificent performance from Ranbir Kapoor.

This musical drama follows the story of a young girl who dreams of becoming a singer but faces opposition from her conservative family. This is a heartwarming and inspiring movie with great performances by Zaira Wasim and Aamir Khan.

Amazon Prime Video Review: Will It Be Worth It In 2022? Here’s What We Found

If you're considering cutting the cord and are worried about missing out on your favorite shows and movies,...
Entertainment

Many of us are connected with Netflix and we share a special bond with the characters of our...
Offers