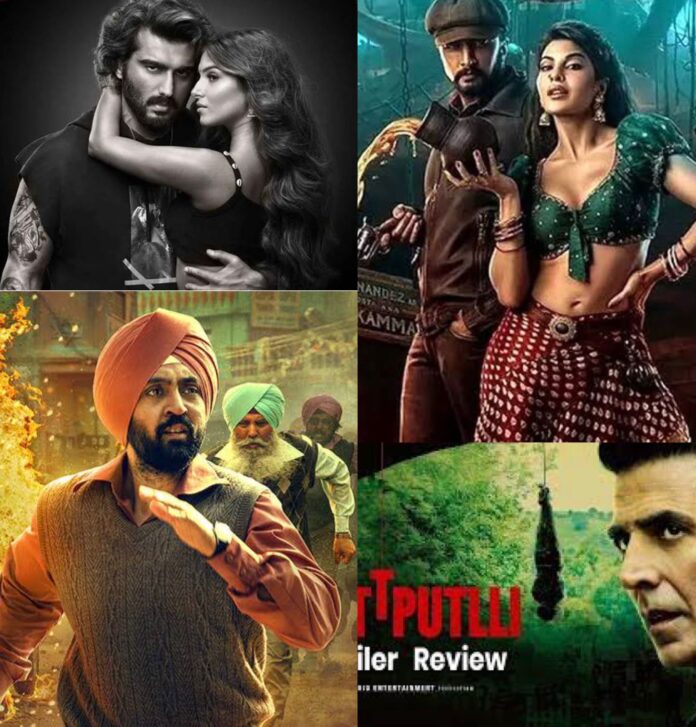 Many worldwide entertainment lovers now consider OTT home. The days of viewing movies on tv or even going to the movies have long passed. The explanation for this is that OTT content is widely available and may be enjoyed in a variety of ways. OTT Platforms are transforming into a new type of cinema. Some movies released through these media contain larger themes than those created for the big screen. Every month, Netflix, Zee5, Amazon Prime, Disney+ Hotstar, and Sony LIV gives high-quality content. The need for OTT platforms and social media are increasing at a rapid pace. With that in mind, let’s take a closer look at what these sites have in store for you in September.

Here is a list of the 12 new shows and movies releasing in September on OTT Platforms such as Netflix, Prime, and others

Khuda Hafiz 2 Agni Pariksha will premiere on Zee5 on September 2, 2022. It is the successor of Khuda Hafiz, which was released on screens in 2020. It’s a powerful alliance action movie featuring Vidyut Jamwal and Shivalika Oberoi about families who have lost a child and will go to any length to get her home.

The reality show will premiere on September 2 on Netflix. The show is a follow-up to the 2020 film Fabulous Lives of Bollywood Wives.  Bhavana Pandey Neelam Kothari Soni, Seema Khan, Maheep Kapoor, and Neelam Kothari Soni star in it. Cameras capture the banter and camaraderie of four fun-loving ladies from Bollywood’s close sanctum as they manage careers, family, and love.

The Lord of the Rings Season 1 of the show will be aired on September 2 on Amazon prime video.  The story features an amazing cast of old and new personalities as they face the return of evil to Middle-earth. These places and characters will establish histories that will live on far after they’re dead, from the dark recesses of the Misty Mountains to the gorgeous woods of Lindon; from the island monarch of Nmenor to the farthest edges of the globe.

The film starring Akshay Kumar will be released on Disney+ Hotstar as an OTT release. Ranjit Tewari directed the film, which also features Rakul Preet Singh, Gurpreet Ghuggi, and Chandrachur Singh in the major roles. The film is a replica of the Tamil classic Ratsasan, and it follows a crazed killer who attacks teenage girls. An Investigating officer/Cop is on the lookout for him.

Thor: Love and Thunder, featuring Chris Hemsworth and Christian Bale in the major roles, will be premiered on September 8 on Disney + Hotstar.  Thor seeks the assistance of Valkyrie, Korg, and old girlfriend Jane Foster to combat Gorr the God Butcher, who aims to exterminate the gods. Thor: Love and Thunder was released in India on July 7, thus this is a fantastic opportunity to see it on the OTT platform.

Kichcha Sudeep is the main character in Vikrant Rona, a Kannada psychological thriller. The plot centers around strange incidents and killings that occur in a town in the middle of a jungle. While the residents suspect a ghost bungalow is to blame, a law enforcement officer arrives in the town and quickly embarks on a mission to find out the truth. Nirup Bhandari, Neetha Ashok, and others play important parts. Vikrant Rona will be available in all South Indian and Hindi dialects on Zee5.

Deekay’s directorial Katteri is a 2022 Tamil thriller comedy starring Vaibhav, Varalaxmi Sarathkumar, Sonam Bajwa, and Aathmika in the major roles. A group of small-time criminals working for a mobster evades his fury. To get away from him, they settle in a place they have no idea is haunted. Katteri is going to air on Netflix on Sept 2, So get ready for the south movie blast.

The upcoming melodrama movie ‘Jogi,’ directed by Ali Abbas Zafar, is centered on the 1984 anti-Sikh violence in Delhi. ‘Jogi,’ featuring Diljit Dosanjh, is a narrative of three buddies battling for their lives over three turbulent days of violence. Jogi will be available on Netflix on September 16th. Diljit Dosanjh, Hiten Tejwani, and Mohamad Zeehand will all star in this suspenseful action flick. This film’s theme is friendship.

For five centuries, the Hammer men have amassed more controversies and mysteries than any vault can contain. The accusations leveled against Armie Hammer are just the top of the glacier. A collection of archive data and conversations with victims and relatives disclose the Hammer family’s dark and perverted secrets. Behind money and power comes a broken family with male characters displaying all of the terrible impacts of privilege gone crazy.

Another psychic murderer has been born eight years after Rakesh Mahadkar terrorized Mumbai. More savage and menacing, but with a similar storyline, the Smiley Mask. Ek Villain Returns tells the tale of two men who are in a one-sided relationship. The routes they choose to realize their love life determine who the Champion is and who the Villain is. Ek villain returns is set to premiere on Netflix on 9th September.

Growing up is all set to release on Disney + Hotstar on 8th September. It is all about the journey from childhood to maturity and the experiences that come with it. Each episode follows a young person who tells the narrative of an occurrence that is exaggerated and shown to the audience. The storylines are incredibly hard-hitting, yet there are parts that everyone can relate to, making the series rather lovable.

If you’re searching for something lighthearted and fun to see, this one is a must-see. Following a mental breakdown, Walter relocates to the countryside in the hopes of leading a tranquil and peaceful existence. Things take a turn for the worse when he discovers his next-door neighbor is the absolute definition of noise.

Previous article
Most Famous Actors in Bollywood? It’s Not Khans
Next article
Watch: Amazing Video of a Father Buying a Bra for His Daughter for the First Time
Flickonclick Team