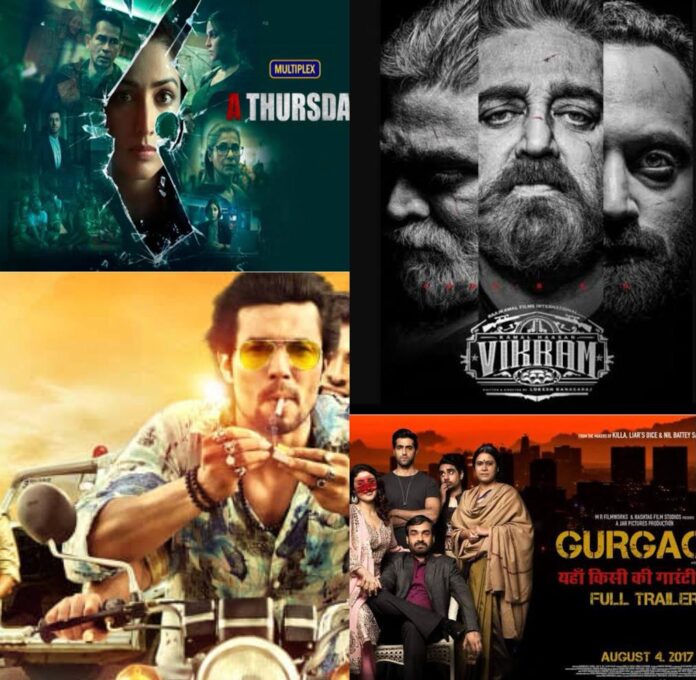 Nothing beats a good thriller movie for getting your pulse pumping. If you’re searching for some high-octane action, check out these great thriller mystery movies on Disney + Hotstar. Disney Plus Hotstar is one of India’s most famous streaming services. The streaming service houses a massive library of TV series and movies, including Disney’s massive movies of original material. These films will keep you captivated by the screen with anxiety on the edge of your seat and spectacular action moments. So, get your fried chicken and soda ready for a heart-pounding thrill.

Lokesh Kanagaraj combines Kamal Haasan’s 1986 movie Vikram’s espionage-filled universe with his own 2019 feature Kaithi’s action-filled universe of drug lords and police in Vikram, a predictably planned action movie that is more eager to broaden its universe without actually engaging us in it. It has the secrets of a spy picture and the excitement of an action movie to some level. However, it doesn’t feel entirely satisfying and fails to offer the adrenalin that a movie with such lofty goals promises. Kamal Haasan, Vijay Sethupathi, Narain, Kalidas Jayaram, Fahadh Faasil, Suriya, and Narain in the major roles.

The Yami Gautam-led A Thursday is a spiritual successor to Neeraj Pandey’s sleeper smash A Wednesday! which debuted in 2008. Both Ronnie Screwvala films depict a vigilante who creates a hostage scenario, keeping the government and the police at the highest levels, for a just cause that is eventually exposed. The Disney+ Hotstar movie stars Gautam as Naina, a Mumbai playground instructor who kidnaps children and demands 5 crores in exchange for a meeting with Pm Dimple Kapadia. Catherine Alvarez (Neha Dhupia) and her subordinate Javed Khan are the detectives on the investigation (Atul Kulkarni). Catherine and Javed share an unusual relationship in the movie.

Micheal leads his powerful family in Kochi, instilling dread and respect due to his tragic history. When a handful of the household’s younger people find his dominance over their lives to be vexing, they band together with enemies to put a stop to him. And the plot follows what happens to them. Many members of the Bheeshma Parvam team revealed before the movie production that it is a family drama with aspects from Mahabharatha. The Godfather, and more for the viewers to enjoy. What you get in the movie is an interesting plot with components drawn from all of them, well-crafted to cater to the new age crowd, and spiced up with some spicy music.

Pink is one of the few Bollywood movies that caused quite a sensation upon its initial release. This film’s plot centers around three young ladies who are assaulted and afterward accused of a crime. When the case gets rigged, Deepak, a former lawyer, steps forward to assist them in clearing their names. Pink as a crime film is a masterwork, boasting a brilliant ensemble led by Amitabh Bachchan and Tapsee Pannu, fantastic lighting, heartbreaking dialogue, and sharp storytelling. This is one of the crime thriller movies to stream on Disney + Hotstar that you will regret missing.

The plot centers around a courageous income tax officer who probes an influential man in Lucknow for laundering money, played by the energetic Ajay Devgn. This top crime movie on Disney+ features action scenes, great shooting, and memorable background soundtracks, in addition to a stellar cast. However, that’s not all: this crime film was superbly filmed and filmed by outstanding filmmaker Raj Kumar Gupta. It’s an incredible crime thriller that every moviegoer should see.

Drishyam, produced by Nishikant Kamat, centers around a guy titled Vijay, portrayed by Ajay Devgn. Ajay goes to tremendous lengths to preserve his family from the grips of the dark side of the law when they do an unforeseen crime. Aside from a fantastic cast, Drishyam excels in filmmaking, soundtrack, and storyline. Drishyam, a mysterious, intense, and gut-wrenching crime drama that you can watch with your children, is a roller coaster of emotion.

This 2016 criminal thriller follows two gangsters, Rajesh and Shankar, as they work together to establish an illicit enterprise. When the cops learn about the transactions, the two men’s relationship is put to the test. Laal Rang is one of the few criminal thrillers that manages to be both realistic and entertaining. This Hindi crime film on Hotstar, featuring the amazing Randeep Hooda, is an emotional rollercoaster with awe-inspiring action scenes, naturally amusing laughter, and well-intended lessons for the youth.

When a crime film stars the incomparable Pankaj Tripathi, you know it’s special. The tale of Gurgaon is exciting, deep, and convoluted, and revolves around a girl called Preeto who is kidnapped by her brother, Nikki. The rest of the film follows the family’s pursuit of Preeto and the various secrets that emerge along the road. Aside from a fantastic plot, this Best crime thriller on Hotstar India movie deserves special praise for addressing gender inequality in our Bollywood movies culture.

Rangoon is a thrilling Tamil criminal thriller about three pals who are involved in gold trafficking in India. But everything goes wrong when a business arrangement goes bad, and the brothers are forced to take drastic steps to save themselves. What genuinely distinguishes Rangoon from the other movies on this list is its realistic depiction of love, devotion, betrayal, and envy. This film, directed by a fantastic cast, has an intriguing narrative that is reinforced by numerous twists and turns.

It would be dishonest not to feature Singham Returns, by far the finest Disney plus crime movie on this list. Singham Returns is the successor to the movie Singham, produced by renowned director Rohit Shetty. In this film, our boisterous cop, Bajirao Singham, returns as the divisional chief of police to eradicate injustice and deal with wrongdoers. Singham Returns is a crime movie with nail-biting action moments, superb dialogue, and an amazing script, in addition to the fascinating plot and outstanding cast.

Previous article
7 Feel-Good Movies to Watch This Weekend on OTT with Your Better Half
Next article
10 Hottest Photos of Suhana Khan, THE NEXT BIG THING
Flickonclick Team

Are you looking to watch an exciting English hot movie to make your weekend worthwhile? Are you simply...
Entertainment

Netflix has a plethora of Hindi dubbed movies but the thriller films stand out among them due to...
Entertainment