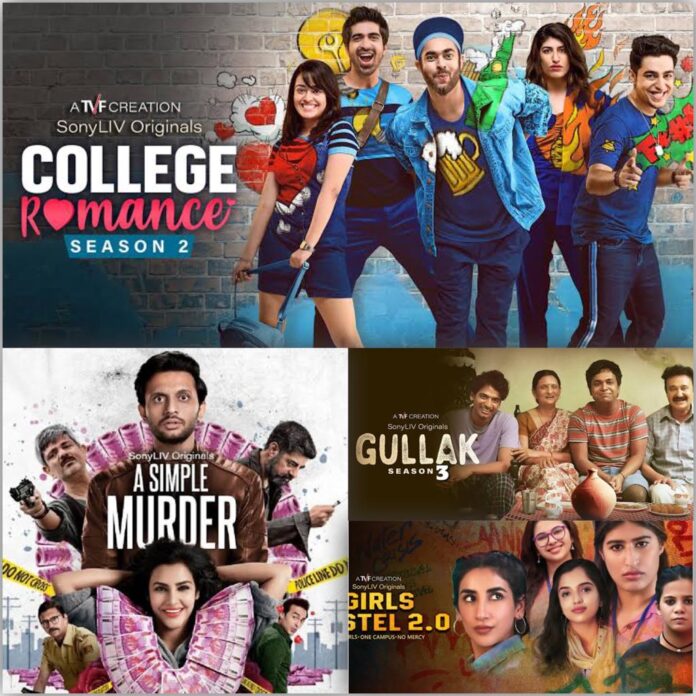 Numerous OTT platforms have been growing day by day with their thrillers and Mystery web series. Sony LIV is one of those streamers that has grown in popularity in a short period. Sony LIV offers a variety of web series in Hindi with different storylines and original content. If you are bored of watching the same content, web series, and thrillers on OTT like Netflix, Amazon prime, or Disney, then we have got your back. Flickonclick has listed the 10 Best Hindi Web series on Sony LIV that offers thriller, rom-com, and mystery storylines that will keep you hooked throughout the day. Scroll down to update your watchlist.

If you’re looking for something humorous yet heartfelt at the same time, Gullak is one of the best Hindi web series on Sony LIV. TVF has a unique ability to capture the pulse of the Indian middle-class society. This short and uncomplicated three-season comedy show is something that you can enjoy with your family members and bond over.

There’s a rare possibility you haven’t heard of this revolutionary Hindi web series on Sony LIV. Scam 1992 is one of the top ten highest-rated TV series on IMDB globally. The show covers the growth and collapse of the famed Harshad Mehta, called The Big Bull of the Indian Stock Market by everyone. The series comprises ten episodes, each lasting approximately 50 minutes.

Do you want to watch some suspense and thriller shows in Hindi? A Simple Murder is one of the best Hindi web series to stream on Sony LIV in 2022. In this action-packed comic thriller, a girl is to be killed, and a money prize is to be earned. However, without spoiling the plot, suffice to say that this comedy will entertain you while also having you think. The show is organized into 7 episodes, each of which lasts between 30 and 35 minutes.

Undekhi is a gripping true-crime thriller that follows the consequences of a girl’s death at a marriage and the extent to which an affluent and influential family will go to conceal the crime. The show has two seasons with ten episodes and 30 minutes each. It is one of the best crime thriller web series on Sony Liv in Hindi that is worth watching on Sundays with dim lights.

Without revealing too much away, this main plot is quite unusual and fascinating. Teenagers are particularly drawn to the show. The show examines the various vices of our social media-driven world to address a variety of 21st-century concerns and issues. If you’re seeking a Hindi web series on Sony LIV that piles up the sizzling moments and drama, the sensuous suspense in the Chutzpah web series is something you should certainly try out.

A fantastic web series to watch that is relevant to and represents the current predicament of the modern millennial generation. It highlights the ups and downs of hostel students’ lives, as well as the bonds between housemates. Furthermore, this recent Sony Liv Hindi web series is a unique piece of amusement that depicts the lifestyle decisions of modern and outspoken girls.

The central focus revolves around a rarely discussed aspect of Indian scientific advancements, as well as a brief explanation of India’s post-independence sociocultural circumstances. Thus, studying Dr Homi J. Bhaba and Dr Vikram Sarabhai, two of India’s great scientific minds, and their lives, struggles, hardships, and achievements is a delight. It is one of the best Hindi shows available on SonyLIV right now.

The student area is simply linked to all of us, and the show presents happy college lifetimes. As a result, the premise is unique and interesting, and it’s one of SonyLIV’s greatest and highest-rated Hindi web series. The supporting actors contributed to the hilarity of the sequences. Each episode focused on a different setting and theme. Watch both the seasons of college romance to remember the old golden college days.

Karan Sharma‘s masterfully produced political Hindi web series on SonyLIV effectively highlights Bihar politics and all that occurs in the brutal world of politics. Huma Qureshi’s portrayal as Rani Bharti is fascinating, illustrating that women can do everything, from housework to being Chief Minister. In Fact, the remainder of the supporting cast members is excellent to watch in Maharani.

Raj Acharya created a patriotic script about an Indian surgical strike on Pakistan. It’s the second season that has recently become the most interesting Hindi web series to stream on Sony LIV.  It highlighted not only the terrorist plots but also the role of journalists and the media, governmental influence, and other issues.

Nothing is more satisfying than resonating with the characters in a movie or a series, feeling what they...
Entertainment

Bored from Netflix and chilling and want to have some desi fun but not the kind you get...
Entertainment

We all love watching movies and series to entertain ourselves, right? And if you are a series lover,...
Entertainment