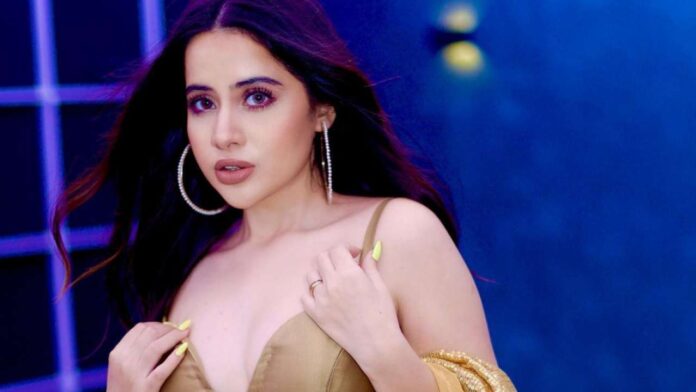 Urfi Javed is an Indian actress and model primarily known for her roles in Hindi tv serials. She was born into a Muslim middle-class household. Her entire family practices Islam. The actress has always been in the spotlight since she became a Bigg Boss OTT participant. Urfi was born in Gomti Nagar, Lucknow, on October 15, 1996.

She is most famous for her roles in Sony TV’s Bade Bhaiyya Ki Dulhania as Avni & Bepannaah as Bella. Javed is well-known for his unique sense of fashion. She constantly updates her Ig account, and her photos are stunning and intriguing because she appears creatively and makes fantastic poses in each of them. To know her detailed biography, scroll down.

Urfi attended City Montessori School in Lucknow for her primary education. She then enrolled in Amity University in Lucknow to finish her bachelor in a degree in Mass Communication. Someone submitted her images to an adult site back when she was in class 11 at her high school.

Urfi Javed then found a job at a call center, and her financial situation began to improve. Before going to Mumbai, she worked as a secretary to a fashion designer in Delhi. She then relocated to Mumbai, where she began modeling and did runway walks at various fashion events. She tried out for several serials. Eventually, in 2015, she made her television appearance for the very first time with the TV series Tedi Medi Family.

Urfi Javed claims her height to be 5 feet 6 inches and her body weight to be 56 kilograms. Urfi is enchanted by her gorgeous brown eyes and glossy black hair. Urfi and Paras Kalnawat had an open relationship at one time. The pair met while shooting the tv serial Meri Durga. They were in an extremely meaningful relationship together. They regularly appeared together and enjoyed each other ‘s companionship. People witnessed the breakup of Paras and Urfi in 2018 for undisclosed grounds. Since then  Urfi is not actually dating anyone, thus she is most likely single. She is solely focused on her thriving profession as a fashion icon and model.

Her Instagram profile has almost 3.8 million followers, and she has over two thousand posts. Aside from that, she is very active on Facebook, where she has over 852k followers.  Urfi Javed is well-known on social networking sites, with a large number of Instagram fans. @urf7i is Urfi Javed’s Instagram handle. Urfi’s Twitter handle is @UrfiJaved.

Styling diva Urfi Javed is noted for her daring clothing choices and experimentation with her appearance. She hardly fails to turn attention when she is pictured wandering the streets of Mumbai. While some people appreciated Urfi Javed’s daring attire, others criticized her outfit choices. Urfi’s fashion experiments are often in the headlines. And she is frequently trolled for doing so. What is wrong with her, many followers on social media guess. Why does she dress in such strange clothes?

Urfi’s fashion sense is usually mocked on the internet. “What sort of fashion taste is that?” remarked one user. One person referred to her as a “crazy chick,” and there’s no doubt that this starlet isn’t afraid to make bold fashion statements via her clothing and remarks. despite some hatred, Urfi is regarded as the fashion icon of the contemporary world even Ranveer Singh said in one interview that he appreciated her fashion sense.