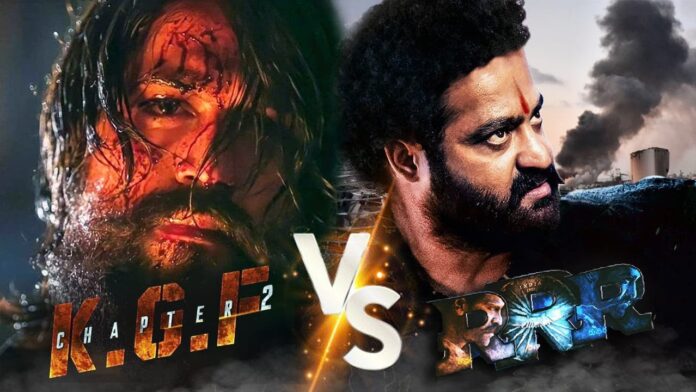 Another all-time hit in the works and performance is KGF Chapter 2 featuring Yash. After 2 years of the epidemic, some back-to-back phenomenal box office triumphs. Its figures are so large that it competes with RRR and Baahubali 2: The Conclusion for all-time top talents.

KGF 2 has been under development for nearly two years, with substantial delays caused by the Covid-19 epidemic. Meanwhile, it generated a lot of attention, equivalent to what Baahubali 2 did. As a result, when the picture eventually arrived on April 14th, it sparked a box office explosion.

Following the huge success of Baahubali Both the parts, SS Rajamouli returns with RRR, featuring Jr NTR and Ram Charan in the major roles. The film was released in theatres on March 25 and grossed over Rs 1100 crore. However, the filmmaker Prashanth Neel’s KGF: Chapter 2 outperformed RRR (in terms of box-office collection and earnings).

Box office earnings and collection of both movies:

RRR, directed by S.S. Rajamouli and featuring N.T.R. Junior and Ram Charan in the eponymous roles, has concluded its run at the blockbuster, earning Rs. 902 crores in India and Rs. 1111 crores globally. When it was released, the film was the third-best movie ever released in India.

KGF 2 has grossed approximately Rs. 992 crores at the box office in India to date. The film grossed an additional $27 million overseas, for total global revenue of about Rs. 1198 crores, barely short of the Rs. 1200 crores milestone. KGF crossed RRR in terms of Box office and become the second-highest revenue-earning movie in Indian cinema.

The last time filmmaker SS Rajamouli dazzled audiences was in 2017 with Baahubali: The Conclusion. It took him five arduous years to create, shoot, and distribute his next feature, RRR (also adapted in Hindi). Bringing off a multi-starrer starring Jr NTR and Ram Charan may appear to be a feat in and of itself. Even when it relates to the narrative, Rajamouli delivers on every level.

RRR is a blazing, mounting, thrilling mix of categories incredible, that very SS Rajamouli mixture, which we are encouraged to guzzle down in one colossal gulp. It’s also, certainly true, extremely loud. But, given that the movie drove me to stick with it and provided us with a lot of entertainment.

Ram Charan achieves the perfect balance of elegance and depth as a lovely Indian in a pre-independence British force. Ram now has the best ‘one vs many’ fight scenes in Indian history, owing to Rajamouli and Prasad.

RRR is far from flawless because, after seeing how Rajamouli pulls off all those situations, you question if he could’ve performed a greater job in others. But if you’re looking for a terrific action-packed melodrama, check out this one this weekend. Especially if you like the action punched with thriller.

KGF: Chapter 2’s storyline is unstoppable. There isn’t a single quiet moment in this 168-minute movie. The narrative moves at a fast pace that allows viewers enough time to assimilate the show’s information. We expected the speed to slow down in the second half, as is typical of most movies, but that never occurred. The tale is so deep, with so many components, twists, and underlying feelings and drama, that We believe it has enough material to drive attention.

The directing of Prashanth Neel is superb. Every scene feels like a motion picture in and of itself, beginning slowly, building momentum, and reaching a peak by the time it reaches its conclusion and finishes with the anticipated release of tension and anticipation for the audience.

This characteristic of the film is shared by all scenarios, whether they are simple interactions, dramatic show-offs, or complicated action sequences. The scenarios are created and carried out in such a manner that the optical and auditory delivery may extract every ounce of macho from the hero and the numerous enemies. As a result, the film will give you a million reasons to rejoice during its duration.

KGF is a Yash performance from beginning to end. If it wasn’t the movie that it is, it wouldn’t be the same. This is the narrative of a guy who climbed from nothing to amass the biggest wealth in the world, which he can keep due to his bravery, sharp intelligence, and ability to see into the future and foresee what it promises for him. With clinical simplicity, Yash absorbed and articulated these important components of his personality.

KGF Chapter 2 and RRR are both action-punched with thriller narratives that will keep you hooked throughout the movie. It is very difficult to say which one is better. As both movies are Outstanding in every aspect. It depends on your choice and taste but If we compare their box office collection KGF outperforms RRR and breaks all Box office records. If you are a south Indian movie fan definitely both movies deserve your attention.

Read More: Bahubali or RRR, Which movie has a better storyline?

KGF Chapter 2 OTT Release date: Everything You Need to Know

KGF Chapter 2 has become a behemoth at the box office within 3 days of its release. The...
Entertainment

KGF Chapter 2 Box Office Collection for Worldwide till now is Rs 1198 Crores or US $119.8 Million...
Entertainment

KGF Chapter 2 OTT Release date: Everything You Need to Know

KGF Chapter 2 has become a behemoth at the box office within 3 days of its release. The...
Entertainment