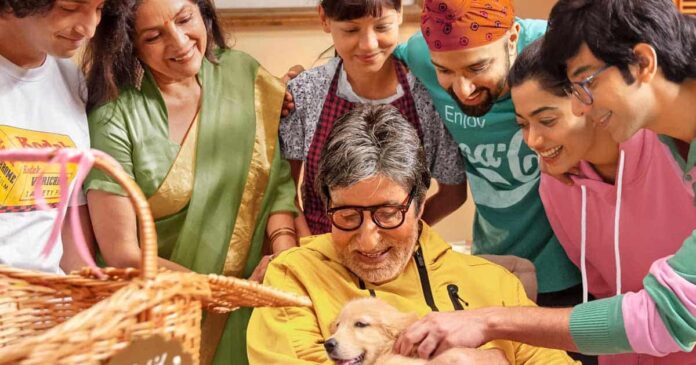 Goodbye Movie Review: An emotional family drama depicting how unrelenting pain is often shrugged off only to feel its consequences at the most vulnerable moments. It’s a reminder that one should conversate and talk out their feelings to ease mental and emotional suffering.

A scattered family is reunited after the death of the mother (Neena Gupta) to perform her last rites. Her husband (Amitabh Bachchan) is an aghast man who is annoyed by the carelessness of his children. Rashmika Mandanna, Pavail Gulati and Sahil Mehta play Bachchan and Neena’s offspring.

Amitabh Bachchan at the front seems like a stern, typical Indian man with a hard-boiled personality. However, his character has a lot more intricacies than that. In reality, he fears being completely alone after the death of his wife. But just can’t seem to bring it up to his kids.

Through Bachchan’s poignant portrayal Vikas Behl has managed to display the emotional problems and barriers we all come across in our lives. How people who we were once connected with the most drift away with time, and it becomes extremely hard to communicate or share feelings with them.

The veteran actor is, as always, excellent. Another experienced actor who does not fall behind anyone in the movie is the deceased mother, played by Neena Gupta. She steals the spotlight in the scenes in which she is present. Gupta’s role as an endearing mother will touch your heart.

Neena Gupta is shown as a typical supportive Indian mother, but that’s all she needed to spread the flair of her acting skills. A pretty simple character is made special by her brilliant performance. Her talks with Rashmika, Sahil and Pavail just hit emotions on so many levels.

The young sensation Rashmika Mandanna has excelled in her debut in Bollywood. Her chemistry with Amitabh Bachchan in the film is just phenomenal. The progress of her character as an individual is shown beautifully in the film. Along with Amitabh, she perhaps plays the role which goes through quite a few significant changes.

Pavail Gulati and Sahil Mehta, as sons, are sincere to the script. Gulati plays the son who is confused about how to navigate his personal and professional life while Sahil is trying to come to terms with what has transpired. Ashish Vidyarthi and Abhishek Khan are also excellent, and Sunil Grover adds that comic touch which makes the film flow smoothly. BGM is also fantastic and complements the storyline with perfection.

All in all, Goodbye is a great movie to watch with your loved ones this weekend.

Bollywood has long been fascinated with rewriting history. Several historical period films have been released in large numbers...
Talent

Tollywood has garnered loads of positive reactions and reviews from audiences and critics alike in the last few...
Talent

Mili box office collection day 2 is an encouraging Rs 65 lakhs against the overall budget of Rs...