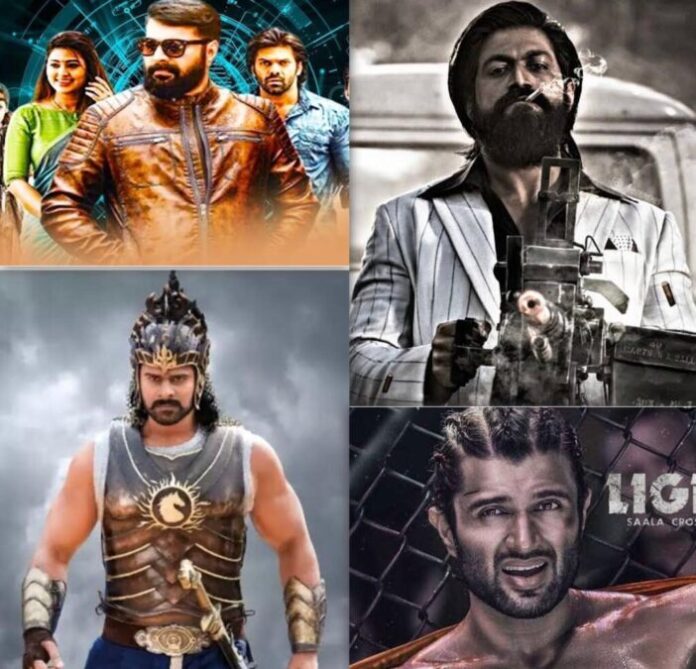 Overhyped! This list of Overrated Tollywood movies will undoubtedly turn many people’s faces crimson. Before you get offend us, let me explain overrated does not always imply flop or bad movies. It simply means that these films have received more accolades than they deserve. Films get overvalued mostly as a result of excessive adoration, whether for the actor or filmmaker or for the picture itself.

There are good Telugu movies, flop Telugu films, and everything in between. However, the public frequently overhypes and says volumes about a film that is not as fantastic as people pretend in general perception.

Liger ranks first in one of the latest Overrated Tollywood movies featuring Vijay Deverakonda and Ananya Pandey in major roles. The efforts of Vijay Deverakonda are clear on screen. His physical metamorphosis for the role is impressive, and his screen presence adds depth to a couple of action scenes. Vijay tried his hardest to act the part, but the stammering didn’t work for him. The biggie drew a lot of attention due to its outstanding trailer. However, the initial audience reactions are underwhelming. The majority of viewers believe that the screenplay undervalues Vijay’s ability. Puri Jagannadh wrote and directed the sports drama Liger.

This Yash-starrer is an engrossing movie that lives up to the expectations and KGF Chapter 2 is one of the best sequels in a long time.  But The KGF Part 1 to be honest, We didn’t understand much of it. KGF Part one was one of the Overrated Tollywood movies with a plot spread in every corner. With a script that was all over the board, characters being presented at a rate faster than a meteoroid’s fall, and a narrative that started up just after the intermission. Everyone was a little lost in the movie too early on. Only Yash’s introductory sequence and his outstanding performance did we fully like. However, the Second chapter proved it was worth the hype.

3. Baahubali (Both the parts)

Baahubali is a fantastic theatrical experience. But is it that good? The plot is really interesting. The core plot was developed by family drama for the crown, but it becomes fouled up owing to a tangled string of desire and retribution that took two decades to resolve.Isn’t that a little too much? The film has a lot to applaud: stunning visuals, and adrenaline-pumping violence, all of which are a delight for any cinephile. But, contrary to popular belief, this is not the favorite movie in our country. It’s just another great movie that is too overhyped by the people unnecessarily.

Isn’t that a little too much? The film has a lot to applaud: stunning visuals, and adrenaline-pumping violence, all of which are a delight for any cinephile. But, contrary to popular belief, this is not the favorite movie in our country. It’s just another great movie that is too overhyped by the people unnecessarily.

Premam is one of the most overrated Tollywood movies that ranks second on our list. Alphonse Puthren directed this picture because he cracked the code of engaging the South Indian movie public without providing them any objective behind the plot. The film Premam is like a butterfly that breaks no rules. The film was made in several languages, but in the end, it was all about boasting and exaggerating the film.

Raja Rani, Atlee’s debut film, seriously impressed everyone. It had the correct combination of feelings and drama, as well as the right amount of fun but then also it is a one-time watch only. In the year 2016, the film was aired. The primary lead, Ilayathalapathi, who has previously appeared in some good films, was anticipated to deliver the same. When the film was released, it quickly proved to have a predictable plot. Even though it was an outdated revenge thriller movie, it made a lot of money. However, it was undeniably an overrated movie.

There was a lot of anticipation when Mammootty came on to direct ‘The Great Father.’ Haneef Adeni, the movie’s debuting director, presented something that his admirers had been waiting for for a long time. The film is noted for having a decent story but lacking in many areas while being hyped by the media and fans. Mammootty fans used this occasion to sell the film as much greater than it was. As a result, audiences were disappointed. In any case, the film did well, being the actor’s first 50-million-dollar film.

The film starred Chiranjeevi, who returned to the big cinema after a decade off to finish his 150th film. When the public witnessed the Superstar return to the cinema. The film raked in a large collection, becoming the year’s 2nd highest-grossing film behind Baahubali. However, when you examine this movie, it was nothing more than overhyped of the same.

One of the list’s least merited entries, but we had to add it because it is simply overrated and hyped by the general public in south India. ‘Vishwaroopam’ is a bold film that tries to introduce something new to the Indian public. Kamal Hassan’s spy drama, produced by the master himself, got trapped somewhere in the adaptation. The film is never bad and does turn some unpolished stones, but it pushes a little too hard.

Read More: 10 Most Overrated Bollywood Movies You Should Just Skip

GodFather starring Chiranjeevi in the lead has crossed Rs 100 Crores at the box office by collecting a...