Irrfan Khan's career was full of memorable performances, and these 10 movies are just a small trailer of his incredible talent and range as an actor. 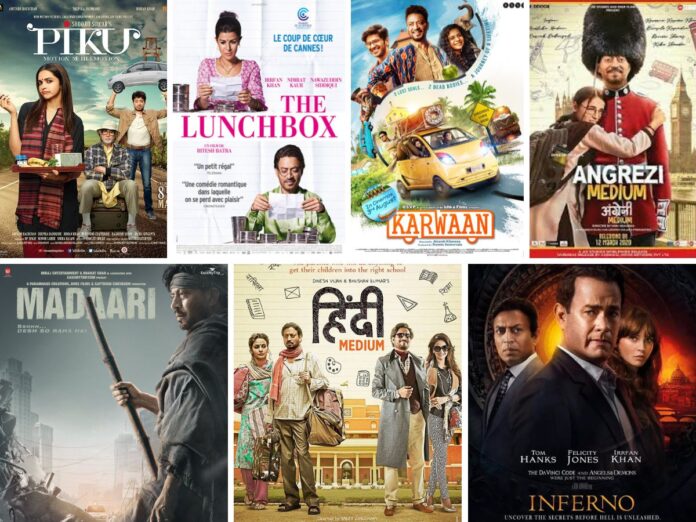 Irrfan Khan was a highly respected and beloved actor in both the Indian and international film industries. Throughout his career, he appeared in numerous genres, including drama, comedy, action, and thriller films. Known for his versatility and powerful performances, Khan has won numerous awards and accolades for his work in both the Indian and international film industries. His performances were consistently praised for their depth and emotional honesty. He was known for his ability to bring authenticity and complexity to even the most challenging of roles. This article will highlight some of the best movies of Irrfan Khan’s career.

In this Academy Award-winning film, Khan plays the adult version of the main character, Pi Patel. His performance as a man recounting his survival after a shipwreck is truly captivating, and he received critical acclaim for his role in this film.

This heartwarming tale follows the unlikely friendship that develops between a lonely housewife and a lonely man through a series of mistaken lunch deliveries. Khan’s performance as the man is nuanced and full of depth, and the film was a critical and commercial success.

This Shakespearean tragedy, set in Kashmir, features Khan in a powerful role as the titular character’s father. His performance was praised by critics, and he received several awards for his work in the film.

In this lighthearted comedy-drama, Khan plays the role of a gruff but lovable taxi driver who becomes involved in the lives of a father and daughter as they journey from Delhi to Kolkata. His performance is full of warmth and humor, and the film was a hit with audiences and critics alike.

This crime thriller is based on the real-life Noida double murder case, and Khan’s portrayal of the investigating officer is both convincing and intense. The film was a critical success, and Khan’s performance was particularly praised.

Khan played a small but memorable role in this blockbuster thriller, in which he portrayed a mysterious and enigmatic character with a dark past. His performance added depth and complexity to the film, and he received positive reviews for his work.

In this social drama, Khan plays a man who seeks revenge against the government after the death of his son in a bridge collapse. His performance is raw and emotional, and the film received positive reviews from critics.

This comedy-drama follows the struggles of a couple who try to get their daughter admitted to a prestigious school in Delhi. Khan’s performance as the father is both humorous and poignant, and the film was a major commercial and critical success.

In this road trip comedy, Khan plays a man who sets out on a journey with two unexpected companions to deliver a car and retrieve the body of his recently deceased father. His performance is full of wit and charm, and the film was well-received by audiences and critics.

This touching drama follows a father who goes to great lengths to fulfill his daughter’s dream of studying abroad. Khan’s performance as a loving and determined father is full of emotion and depth, and the film was a critical and commercial success.

Despite his many accomplishments, Khan remained humble and gracious throughout his career. He was deeply committed to his craft and was always willing to take on new challenges and push himself to the limits as an actor. His untimely death in 2020 at the age of 53 was a huge loss to the entertainment industry, and he will always be remembered as one of the greatest actors of his generation.

Irrfan Khan’s career was full of memorable performances, and these 10 movies are just a small sampling of his incredible talent and range as an actor. He will be greatly missed, but his contributions to the world of cinema will be remembered for years to come.

Punjabi comedy movies are notorious for packing a lot of bombs, and this year has been no exception....