Tollywood has garnered loads of positive reactions and reviews from audiences and critics alike in the last few decades. Tolly movies are consistently praised for exciting storylines and character build-ups. The over the top action and the quirky comedy scenes featuring Brahmanandam in almost every other film has engulfed the Northern part of India. 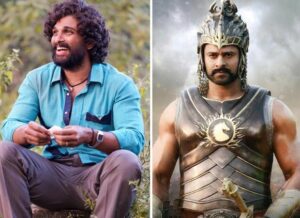 Movies like Enthiran, Pushpa, Arjun Reddy, RRR and many others have broken all-time collection records at the box office in Bollywood dominated regions. Tolly cinema has risen through the ranks with the Hindi dubs of the films helping the Tolly filmmakers to widen their reach among the audiences. Tollywood is competing for neck-to-neck with Bollywood and ultimately raising the entertainment bar for Indian fans.

Here are the 10 most loved Tollywood movies dubbed in Hindi:

Bahubail was an overnight success that shattered all the box-office records with its release in July 2015. The period drama starring Prabhas created a massive buzz with its bone-chilling action sequences. The movie invoked almost every emotion with its mysterious and tragic storyline.

The film tells Shivudu’s story, who realises that he is the son of the Mahishmati kingdom’s former ruler Amrendra Bahubali. His father gets brutally murdered, and his mother is put in prison by the antagonist Bhallaldeva. The movie follows Shivudu’s journey to exact revenge against his father’s arch-enemy and frees his mother from the clutches of evil Bhallaldeva.

Renamed in Hindi dub as Robot, the movie stars the South superstar Rajnikanth and the elegant Aishwarya Rai Bachchan. The movie revolutionised the Sci-fi genre in the Indian film industry. Enthiran, made on a massive budget of over 100 crores, proved the mettle of superstar Rajnikanth.

Enthiran follows the story of a genius scientist Vaseegaran who invents Chitti, a robot capable of perceiving and feeling human emotions. Things go southwards when Chitti falls in love with Vaseegaran’s girlfriend and wayward on the path of mass destruction and annihilation.

The most recent entry on this list is the stylish star Allu Arjun’s Pushpa, which is still creating a buzz in 2022 with its trademark modern sequences and eye-catching song, Srivalli. The movie also stars Samantha Ruth Prabhu in the titular role.

The film showcases the tale of a man named Pushpa, who enters the business of red sandalwood smuggling. However, everything goes awry when the police get involved in terminating his illegal enterprise.

Arjun Reddy came out of nowhere to sway the Indian audiences off their feats. The movie was a groundbreaking success and popularised the heavy beard, and round sunglasses look. The film also inspired a highly successful remake in Bollywood called Kabir Singh.

Critics condemned Arjun Reddy for glorifying toxic masculinity and reducing women merely to an object of desire. The film tells the self-destructive story of Arjun, who spirals out of control when his girlfriend agrees to marry another man.

Dubbed in Hindi as Aparichit, this Tollywood movie released in 2005 is perhaps the most loved film from South in Northern India. The movie stars the exceptional actor Vikram and Sadha in titular roles.

Anniyan is a movie about a man named Ramanujam who has multiple personality disorders and acts as a vigilante at night. He delivers justice using ‘Garud Purana’ to those evil beings who have managed to stay away from the grasp of law enforcement.

Dubbed in Hindi as Dangerous Khiladi 5, the movie released in 2012 follows a complex and compelling storyline of two lovers trapped in a lethal conspiracy. The film features Ram Pothineni and Tamannah in the lead roles.

The film revolves around Sravanthi, played by Tamannah, whose soul leaves her body while lying in a hospital in a pretty bad state. Her soul falls in love with a troubled young man who aids her in unearthing an intriguing conspiracy.

Yevadu is an action-packed mass entertainer starring Ram Charan, Shruti Hassan, and Amy Jackson. The film was released in 2014 to become an instant hit and establish Ram Charan as one of the superstars in South cinema.

Satya goes through a face-changing surgery in the movie, which adds to his list of problems. While dealing with his issues, he has to fight off the criminals pursuing the lover of the person whose face he gets.

Available on: Voot for free

Thalapathy Vijay stars in this entertaining flick that always makes you click. The film is an action/thriller with lots of twists and turns to keep the audience hooked until the end. Master will leave you wanting more with its climax.

It centres on an alcoholic teacher recruited to teach at a juvenile facility without his knowledge. He soon clashes with a criminal mastermind using children as scapegoats for his heinous crimes.

The only legal drama included in this list is full of action-packed thrillers and suspenseful movies. Vakeel Saab, directed by Venu Sriram, stars the ever-charming Pawan Kalyan in the leading role with Nivetha Thomas and Ananya Mahalla.

The movie follows an alcoholic lawyer, Satyadev, who takes up the case of Pallavi, a girl molested by the politician’s son. He fights a legal battle for her when other lawyers refuse to consider the issue.

In Tollywood cinema, a blockbuster hit of 2018, the action drama features Jr. NTR, and Pooja Hegde was. The critics and audiences hailed the storyline and the acting of NTR and Hegde.

The film follows a young man who tries to resolve the conflict between two villages whose people have been severely affected by the constant feud for 30 years.