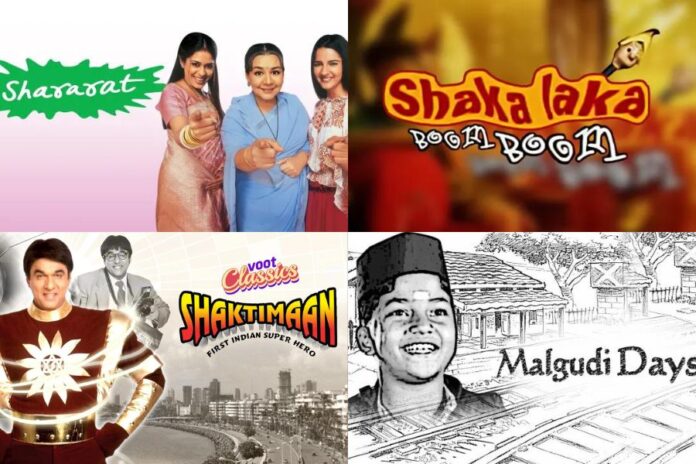 Iconic Hindi Serials to Watch Online: Shaktimaan, Shaka Laka Boom Boom, Hatim and Karishma Ka Karishma are some of the iconic Hindi serials that you can now watch online on OTT platforms like Disney+ Hotstar, SonyLIV and more. These Hindi serials from the 2000s left a lasting impression on us. Hindi serials like these are not made anymore, and we all feel a bit disappointed with how Indian television has progressed. However, now you can easily rewatch your loved serials online on OTT platforms.

The adventures of Hatim and Hobo were loved by all of us. Their camaraderie and their journey to save Jasmine and fight the ultimate evil were just too amazing. We all waited eagerly for each episode of this iconic Hindi serial when it was airing on TV. Rahil Azam as Hatim Tai and Kiku Sharda as Hobo were brilliant. Hatim Tai goes against the evil force and searches for seven answers in order to save his lover. Throughout his quest, he travels to unknown lands with strange people and faces various struggles on the way. It’s one of the best iconic Hindi serials to watch online on Disney+ Hotstar.

It can’t get more iconic than Shaka Laka Boom Boom when you talk about Hindi serials. Sanju’s magic pencil was a huge thing back in the day, and every kid wished to own a magic pencil like that. The show gave us stars like Jennifer Winget and Hansika Motwani, who now rule the Hindi serials and Bollywood, respectively. Sanju, a young child, discovers a magical pencil that allows him to draw anything, and it comes to life. Sanju soon finds himself in conflict with other wicked entities that want to abuse the pencil. This is surely among the best Hindi serials to watch online on Disney+ Hotstar.

This is the real OG when it comes to horror shows in India. Ssshhhh…Koi Hai was one of the best Hindi serials that kept you guessing with ultimate storylines. It was spine-chilling and made us fear for our lives at some moments. The show follows the journey of three ghostbusters who travel around the world to fight off evil spirits and save people. Certainly, one of the iconic Hindi serials to watch online on Disney+ Hotstar.

Karishma Kaa Karishma was a heartwarming Hindi serial that ran for a short while. However, it made its presence felt with the few episodes it had. The serial has gained a cult following over the years. A robot girl named Karishma was created by computer engineer Vikram and is programmed with good and constructive ideals. She embodies what a well-bred child should be and is constantly available to support Vikram’s family in difficult times. You can watch this Hindi serial online on Disney+ Hotstar.

An extraordinary gift is passed down through three generations of women in one family. As a kind of entertainment and as a means to deal with the challenges of daily life, they engage in magical practice. Farida Jalal, Shruti Seth and Poonam Narula became household names with this ultimate Hindi serial. The heartwarming show was a favourite time pass of Indian families. This list would have been incomplete without having this Hindi serial. You may stream it online on Disney+ Hotstar.

Who can forget the opening song of this iconic Hindi serial that was the first thing which introduced Indian viewers to a superhero? Shaktimaan is still remembered fondly by people. Back in the day, it had an insane following, and no Hindi serial came close to this show in regard to popularity. It has been remade several times, but the original serial’s charm could not be recreated. The good news is that you can now watch online one of the most iconic Hindi serials on Voot.

Another Indian superhero Hindi serial that made us feel amazing after Shaktimaan. Hero- Bhakti Hi Shakti Hai follows a school kid who finds a magical ring which transforms him into a superhero. He then uses his powers and two of his reliable partners to fight off the evil powers and villains. Nostalgia comes flooding in when you hear the opening song of this iconic Hindi serial. It’s one of the best Hindi serials to watch online on YouTube.

RK Narayan, the famous Indian writer, wrote the book from which this show was adapted. Malgui Days. Swami and the rest of the people who live in the tranquil town of Malgudi have a simple way of life, but they face many challenges head-on and refuse to give up. Malgudi Days is about the innocence, struggles and friendships which we miss in big cities. It is definitely one of the best Hindi serials to watch online on YouTube.

Tenali Ram used to air on the Doordarshan TV channel. The show followed the life of a clever and smart poet and scholar who used to come up with unorthodox solutions to problems. His unique methods were always something that surprised us and made us guess what he would do next when he faced another problem. This was a favourite Hindi serial of many kids in the 2000s. You can watch online all the episodes of this iconic Hindi serial on YouTube.

A couple named Keshav and Dilruba live next door to each other, and they both secretly desire to marry the other’s wife. When they make a concerted effort to get close to and flirt with each other’s spouses, the results are hilarious. It was one of the best Hindi serials and started the popular genre which is now used by Bhabhi Ji Ghar Par Hai. You can watch online all episodes of one of the iconic Hindi serials on YouTube and Dailymotion.

Some of the great benefits of subscribing to Disney Hotstar are the availability of Bollywood and Hollywood movies,...
Offers

Reliance Jio has begun prodding a bundle offer under which it'll incorporate a Disney+ Hotstar VIP membership for...
Offers

The Hotstar Original' Special Ops' is ready for a spinoff going by 'Special Ops 1.5' where we're moving...
News

A check has been placed on the YouTubers outside the American region. Google has recently made a thunderbolt...
Entertainment

Hot Hindi movies filled with thrill and excitement are just what you need to relieve the stress you...