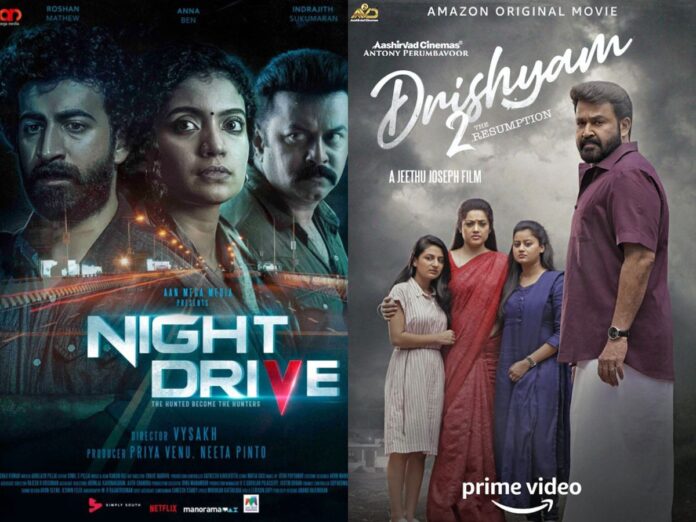 One of the best Malayalam thriller movies of all time, Drishyam 2, is being remade in Hindi after its immense success in the South. The film follows a cinema hall owner who gets entangled in a cat-and-mouse game with law enforcement to cover up his family’s crimes and save them from trouble.

The original Drishyam film, which has become a cult classic over the years, is a must-watch for those who love suspense and thrill. It is the pinnacle of Malayalam thriller movies. The film follows a cinema owner who devises an insane strategy to cover up the crime committed by his wife and daughter.

Anwar, a consulting criminologist who helps out the Kerala government every now and then, is a brilliant mind. He is put into a tough spot when a series of serial killings take place, and he must find the criminal responsible for it to save future victims. It’s an edge-of-the-seat Malayalam thriller.

Another serial killer thriller that will keep you hooked all the time for all the right reasons. An ex-cop is reinstated to help out his daughter in finding out a gruesome serial killer who is always one step ahead of the police.

A couple goes on a night drive to have some fun and enjoyment. However, everything turns awry when they meet with an accident that opens up an extensive investigation and threatens to ruin their life forever. It’s a must-watch among the best Malayalam thriller movies on this list.

An exciting suspense thriller that will keep you guessing about what’s going to happen next. The film follows three police officers who are framed for crimes they did not commit by corrupt officials. They try to avoid jail by fleeing and staying one step ahead of the corrupt officials.

There is something about Malayalam thriller movies associated with police and investigation that we can’t get just enough of them. Joseph is about a retired police officer whose ex-wife dies, and he is suddenly pulled into a criminal investigation that deals with organ harvesting.

You must have guessed by the name that this film follows a detective. The detective is on the hunt to find out the answers behind the suicide of a political leader who is just about to go into the by-elections.

This Malayalam thriller movie has elements of horror and psychological suspense that hits hard with its compelling storyline. The film follows a psychiatrist who visits a remote mental asylum in Kerala and discovers a woman with an unhazy past.

The latest sensation in the entertainment world Dulquer Salmaan stars in this film as a cop who is haunted by a case of the past that he closed with a few officials without investigating in deep. He once again revisits the case on his voluntary leave and discovers many hidden secrets and truths. It’s one of the best Malayalam thriller movies released recently.

A butcher is put in deep trouble when a buffalo that he was supposed to butcher goes astray and raises hell in the village. It’s an engaging Malayalam thriller that will connect you with the tradition and culture of the South Indian people.

A police officer drowns in alcohol when a criminal slaughters his whole family. He sees no hope of finding the criminal until a new case emerges on which he is called upon to assist cause the murders showed an uncanny similarity to the murder of his family members.

Nakul and his family move into his ancestral house, which is deemed as a haunted property by the people around them. Nakul does not believe in these superstitions. However, he becomes concerned when his cousin starts to behave unnaturally. He then enlists the help of his psychiatrist friend.

This epic Malayalam thriller movie has some of the biggest stars of Malayali cinema in its star cast. The film is about an heir of a business who becomes the target of the hate of his family members when he inherits the business.

The terrorists take an Indian nurse working in Iraq hostage along with her colleagues. An Indian ambassador Manoj helps them in this critical situation and tries ways to somehow get them alive out of the mess. It’s undoubtedly one of the best Malayalam thriller movies to watch right now.

A retired judge tries his level best to save his daughter from a criminal who is after his family because he sentenced him to prison in the past. The judge gets murdered, and a visually impaired man loyal to him comes forward to save the judge’s daughter from the convict. Oppam is one of the best Malayalam thriller movies streaming online.

Two friends run into an IPS Offical, David, with whom they share the unfortunate events that have happened to them. David promises to help them get out of trouble. However, the two friends don’t realise that David is not what he claims to be.

A determined and dedicated police officer works hard to solve the case of a missing teacher, but an accident completely changes his circumstances and jeopardises his career. Will he be able to come out of this situation?

Ibrahim, a widower, is grieving the loss of his child and wife. He lives in a remote location and rarely has any visitors. However, his life turns upside down when a police officer knocks on his door with a criminal.

If you liked this article about the best Malayalam thriller movies, do share it with others.

Somewhere deep in our souls, we like the happy endings of any love story. Bollywood has given us...
Offers

We Flickonclick offer you with the most recent hacks to get a free Hotstar subscription in 2021. Hotstar is...
Lifestyle

Jitendra Kumar is a rising superstar in the Hindi film industry. His roles in web series have earned...
Offers

How Vi Customers Can Avail Free Hotstar VIP Subscription For a Full Year?

Disney+Hotstar is coming up with some of the greatest shows such as the newly released Marvel series, Loki....
Offers

Do you want to get a Free Hotstar subscription? One of the top OTT platforms is Disney +Hotstar,...
Offers