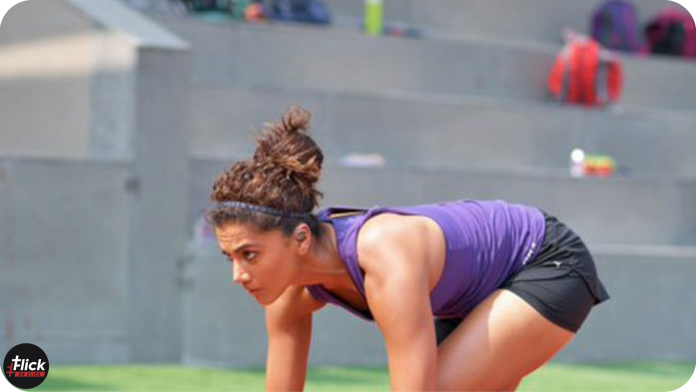 Tapsee’s new film ‘Rashmi Rocket’ is all set to release this Dusshera season on October 15th. No! We’re not saying that Tapsee herself did. She shared the release information of her film and notified us all of what’s coming next on Instagram and Twitter.

Now, as a sports drama film, it’ll be an interesting watch just like any other sport-centric film which helps us pump adrenaline. Additionally, we also have a hint of the underdog rising factor which can be included in the film as evident from the posters.

Get ready to run with Rashmi in this race on and off the track. She will need you in this one 🏃🏾‍♀️🚀#RashmiRocket ready to take off on 15th October 2021 only on @zee5 pic.twitter.com/spUVDap0SH

No trailer has been released of Rashmi Rocket yet but you’ll find a handful of fanmade or concept teasers and trailers on the internet. If they are to be believed (which you should not), it’ll be the story of a married village girl with a dream of participating and winning in track and field events specifically running.

Come on! That’s much evident from the cast that has been revealed up to now, where the prominent roles of Tapsee’s character including her husband, mother, and some side character have been revealed.

Moreover, you’ll also get to see the eye candy of Indian web media Abhishek Banarjee, which has been known for his great roles in Stree, Patal Lok, some Netflix Anthologies, and more.


Tapsee has been under the spotlight due to Tax office interventions and all along with Anurag Kashyap. But due to her being unspotted and untouched by the law-abiding authorities, she came clean and ruled with her tweets on social domains.

Moreover, as we know she has been the superstar of the South and Bollywood industry as well, her movies are living proof of that due to her acting and all.

Well! We’ll be waiting for October 15th, 2021 and you know what, not only that you’re also be bombarded with Sex Education Season 03, YOU season 03, and more on the same date. So, it’ll be a hard choice.

Previous article
Thalaivii Reviews: A Must Watch For a Great Cinematic Experience and More
Next article
Celebrity Sneak Peeks: Watch As Nora Fatehi Unravels Secret Of Her Life In This Exclusive Interview
Flickonclick

Amazon Prime Video is in no mood to stay quite and is dropping one after another hit series...
Entertainment