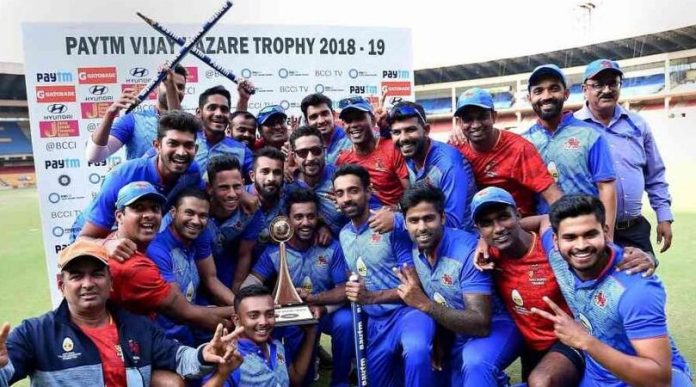 This Sunday, the informal auditions for IPL 2021 concluded in the form of the Vijay Hazare trophy. Mumbai, led by Prithvi Shaw, took the trophy home as Uttar Pradesh came second.  Vijay Hazare competed between 32 teams has already provided some great IPL players in the history.


From actual IPL players to many new faces, many exceptional players took part in this competition and expressed their skills extraordinarily.

Here is a detailed list of the exceptional talent showcased by some extraordinary IPL players:

Not only is his name a huge Bollywood Swag, but he was also flexing his batsmanship hard on the ground. Khan, a Tamil Nadu player, became a celebrity during the IPL auctions.


With a record of flashing 198 runs in just five innings at an avg of 67 in the competition, he drew the attention of all, especially Preity Zinta, who bought him for Punjab kings. It is predicted that he’d get the middle place and own up to his new title- the game-changer.

Priyam Garg, who is recruited to play for the Sunrisers Hyderabad, seems very promising and would be an excellent addition to the team.


The right-handed batsman aced about 286 runs in the Vijay Hazare trophy, including a couple of fifties and a century. He is an apt fit for playing in the middle as he can be trusted with gaining runs and not losing a wicket at the same time. After all, the man scored half a century without getting out.

Nitish Rana might be our next Suresh Raina. He managed to score 398 runs in 7 innings and won the most run getter title of the competition. This left-hand batsman was a crucial player in the middle order for KKR in 2020. His ability to chase high runs while managing to secure his wicket has benefited KKR a lot.


His skill and improvement since 2017 IPL have steadily increased from scoring over 300 runs to 352 in the year 2020. He made a high reputation for himself with his unbeatable scorecard in the Vijay Hazare trophy.

Although this left-handed batsman didn’t get the chance to shine during his three year time playing for IPL, he sure did glitter in the Vijay Hazare trophy and managed to score 272 runs in 5 innings.


He scored a good reputation with the fifties against RCB in one among the three innings he played for RR. Mahipal is anticipated to play more matches in 2021’s IPL under the famous skipper Sanju Samson.

While many new and old IPL players are coming into form, but Mumbai opener Prithvi Shaw has been in the form of his life. He’s finished as the highest run scorer in Vijay Hazare Trophy with record of more than 800 runs in single edition of Vijay Hazare. This has never been achieved before. Prithvi Shaw also broke the record for highest List A score as a captain, previously held by Graeme Pollock, who made 222* for Eastern Province.

One of the brightest future on Indian Cricket team, we refer to him as “Future Yuvraj Singh of Indian Cricket” with his flamboyant shots he have in his book. He created a record in Vijay Hazare trophy with 4 consecutive hundreds in his name. Padikkal is probably the right guy that can help Virat Kohli to win his first IPL title for RCB.

Previous articleMS Dhoni in New IPL Ads That Gone Viral on Social Media
Next articleIPL 2021: 3 Teams That Has Got Everything to Grab the Title
Flickonclick

The IPL 2021 is only three weeks away to get started and spectators cannot wait any longer to...
IPL

Glad to hear that IPL 2021 is finally resumed on 19th September with CSK winning the first match...