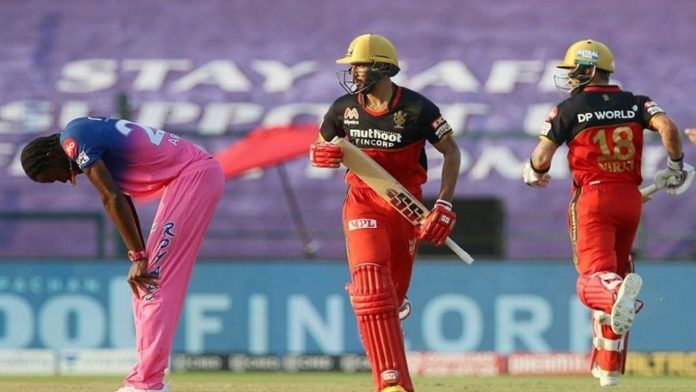 RCB won against Rajasthan Royals by 10 wickets in the match yesterday evening. They truly hold their position of number one by all means and the game was like an easy swoop for them.

Winning the toss, Captain Kohli from RCB decided to bowl first, and thus, Royal’s started with the bat in the first innings.

Jos Buttler and Manan Vohra started the game but they were sent back very soon in the game at a score of 8 on 8 balls and 7 on 9 balls respectively.

Then comes Royal’s skipper, Sanju Samson and with his 2 fours and 1 six, he did bring in some speed to the game but he was taken off by Washington Sundar in the 8th over.

Shivam Dube and Riyan Parag did a great partnership in the middle overs and after Riyan got back to the pavilion at the score of 15 on 16 balls, the command was handed over to Rahul Tewatia.

Tewatia knowing well that how badly his team needed his contribution established himself first and then started hitting hard but steady. With 4 fours and 2 sixes, he did put up 40 runs in 23 balls and was taken aback by Mohammad Siraj in the 19th over.

The Royals ended up putting a decent enough score of 177 at the loss of 9 wickets on the board after playing a full 20 overs.

Now, moving onto the RCB’s inning and it was one of the most composed and phenomenon innings in this season of IPL. The reason being the starting duo Virat Kohli and Devdutt Padikkal.

With Kohli taking a back seat in support throughout the game, Padikkal took a front seat and started with heavy-hitting. Shot after shot and he was blossoming throughout the match.

On the other hand, the skipper Kohli did a well enough job to keep everything in check and made room for Padikkal to perform freely.

They were putting upfront a game of heavy-hitting boundaries and beautiful placements. Finding gaps and pushing through the boundaries after a massive six was looking like their mojo.

The game was fully dominated by RCB in the first and the second half as well. With the opening duo pushing it till the end, RCB ended up chasing the total very easily and won the match.

Kohli completed his half-century with 72 on 47 balls having 6 fours and 3 sixes. While Padikkal got a century innings with 101 runs on the board in just 52 balls having 6 sixes and 11 fours and a strike rate of 194.23.

The way RCB played was like a champion and they still managed to secure their 1st position with no loss whatsoever in the whole season.

The next game is to be played between Punjab Kings and Mumbai Indians today at 07:30 in the evening.

The prediction says that Mumbai is a lot stronger than Punjab for being the winning contender in the match. Now, Mumbai has bagged two wins in this season and is at the 4th position while Kings just shifted to the 7th position after Royals substituted them for the 8th ranking.

They’ve lost all their last three games and well! Who can say what to happen but it’ll be an exciting match to watch after all. Tune in soon for more and comment on your favorite team in the comment section now, let’s see who has more supporters.

Disheartening news for IPL fans. IPL 2021 has been postponed due to a surge of coronavirus cases across...
Offers

IPL 2021- The Challengers who were the undefeated champions since their last match with CSK are having a...
News

During the IPL Auction event on 11th February, Aryan Khan and Suhana Khan filled in for Shahrukh Khan.The...
IPL

This Sunday, the informal auditions for IPL 2021 concluded in the form of the Vijay Hazare trophy. Mumbai, led...
News