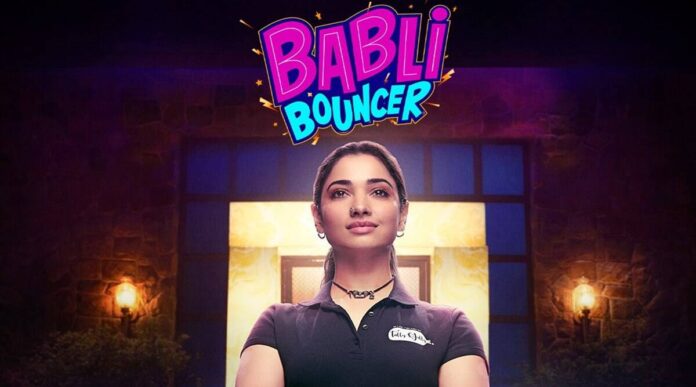 Babli Bouncer Review Outline: Tamannaah Bhatia delivers her career best in this Bollywood film with a novel plot and light-hearted comedy. The movie keeps you indulged in the story of the Babli Bouncer with its powerful performances despite being a little predictable at times. Babli, a Haryanvi girl in her twenties, does not fit into the mould of the stereotypes that define the conventional girls in India. She is quite different and definitely a fresh breath of air. Babli flunks her 10th standard exam five times and ultimately gives up on her education. She sees no harm in living a carefree life in which she gets to rough up the boys occasionally with her friend Pinky. Babli’s mother, played by Supriya Pathak, wants her to ace the skills of a woman and learn the conventional duties of a stereotypical Indian housewife.


However, Babli has other plans as she is not the least bit interested in what her mother desires from her. She is a strong-headed character who is trying to somehow discover her own path in life. However, everything changes for Babli when she meets a London-returned handsome young man Viraj (Abhishek Bajaj). In order to impress her, she convinces her father to let her do a job as a female bouncer in one of Delhi’s nightclubs. Not everything goes as smoothly as she thought, and the events following this decision changes her perspective on life.

Tamannaah Bhatia has done a commendable job as a stern Haryanvi girl. She plays the part beautifully, and her acting does not seem forced at any moment. She is the livewire of this heartfelt comedy. Tamannaah’s Haryanvi accent is also on point, and she manages to pleasantly surprise us with her skill development. Many questions were raised when the trailer of the film dropped, but Tamannaah has answered her critics in style with her flawless performance.


Saurabh Shukla is always a delight to watch on the screen, and this time around, he again reinstates our faith in his brilliant acting skills. He plays the loveable doting father of Babli, who is willing to do most of the things her daughter wants from him. The father-daughter bond between him and Tamannaah in the film is just too pure and pious. The veteran actress Supriya Shukla as Ganga, the mother of Babli, is also brilliant in her role. Abhishek Bajaj, Sahil Vaid and other cast members have also justified their acts.

Madhur Bhandarkar’s Babli Bouncer is a treat for those who want to watch a women-centric light-hearted comedy. The movie flows quite smoothly and makes you root for Babli throughout its entirety. It definitely deserves to be watched at least once by everyone.

The lottery is a gambling game that relies on luck. It is usually characterized by emotions. But one...