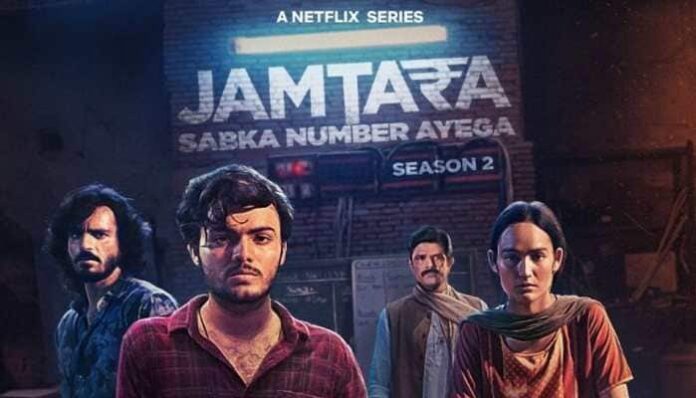 Jamtara Season 2 Review Outline: The new season of the show refuses to settle in the pre-defined mould of a crime thriller in India. The unconventional choices and unpopular opinions are given a voice of their own in this story that is unafraid of failure. Jamtara: Sabka Number Ayega Season 1 was a Netflix hit that many did not see coming. The unusual setting and story made people fall in love with the authenticity and uniqueness of the story created by Soumendra Padhi on a concept created by Nishank Verma. What really worked in the show’s favour was the originality that it brought to the scene, with its story being partially inspired by the real events that the series director Soumendra Padhi came across through a few newspaper articles in 2015.

The first season of Jamtara Sabka Number Ayega worked like a charm on Indian audiences. However, that also put a lot of burden on the creators to justify the hype and interest surrounding this series with its second season. Nowadays, everyone is writing stories about small towns in India and bringing them to the forefront with the OTT platforms. From Mirzapur to Pataal Lok, tons of crime thriller web series have gotten popular using the formula of combining crime, corruption and emotions in a small town in India. However, with the quantity of the shows being produced, the quality has been put on the back burner, and the Indian audiences are now looking for fresh content that fascinates and interests them with their intriguing yet relatable storylines.

Jamtara Season 2 is one of those Netflix original series that stands out among the crime thriller web series nowadays. The concept developed in the first season of the show has been taken one notch forward in a fabulous manner that does not seem forced at all. In fact, you will be surprised by the fluid transition that the show has managed to bring with its second season. The story of the phishing racket in a small town of Jharkhand in which youth, politicians and police are involved will keep you on the hook with every episode.

Kanishka and Ashwin Verma, the writers for Jamtara Season 2, have wonderfully woven a story that is not afraid to take its own path. The new season of the show refuses to settle in the pre-defined mould of a crime thriller in India. The unconventional choices and unpopular opinions are given a voice of their own in this story that is unafraid of failure. This, in fact, turns out to be the key factor that separates Jamtara Season 2 from the bunch surrounding it. The show has stayed relevant and unique and did not give into the temptations of being a classic crime drama.

There is no stereotyping of the characters the audiences are left to judge everyone on their own accord. No outright social remarks and comments are made in the show, but the usage of analogies, metaphors and allusions will make you ponder over what the show wants you to think about. The profound narration continues with the second season, and we could not be more happier about it. The show is utterly brilliant with its storytelling and will make you think about the intricacies of human emotions as well.

Jamtara Season 2 also benefits from powerful performances delivered by the actors Amit Sial, Sparsh Srivastav, Dibyendu Bhattacharya, Monika Panwar, Anshumaan Pushkar and other significant cast members. The show is a must-watch that you should stream right now if you have a Netflix subscription.

Previous article
Upcoming Bollywood Movies in October 2022 that You Should Add to Your Watchlist
Next article
Babli Bouncer Review: Tamannaah Bhatia Shines in The Entertaining Novel Comedy
Virat Verma

Netflix is known to bring the best of the best shows over the internet, and this time the...
News

Malayalam movies are now remade in Hindi by Bollyoowd due to their engaging and enthralling storylines. The best...
Entertainment

Thunivu released in the theatres on 11th January 2023, and the film is going to release on the...