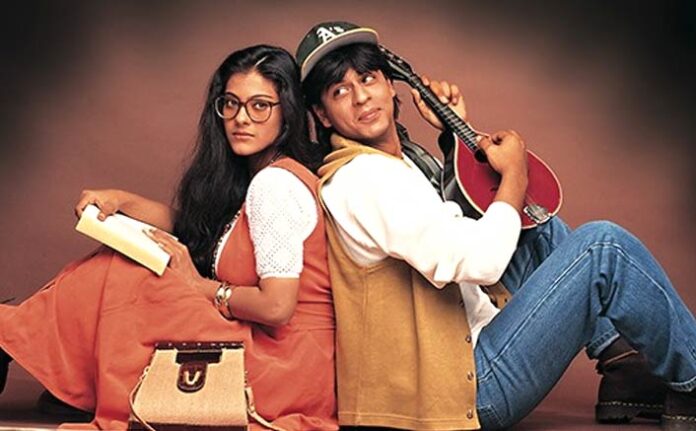 Being madly and deeply in love with someone is the most beautiful emotion that one can ever experience. To be head over heels in love with someone who equally reciprocates the same energy is something that we all crave at a certain point in our lives. Without love what is this world other than a hollow structure? However, you know it. I know it. But what about the Indian parents who are hell-bent on securing a prosperous future for their kids that they sometimes tend to ignore their love interests? Well, we got a remedy for that. Here are some fine Bollywood movies that can possibly convince your parents to happily marry you off to your lover.

Shah Rukh Khan is synonymous with love in India. His presence on screen became a symbol of warmth and tenderness. SRK and Kajol’s perfect pairing made most of us believe that they were actually a couple in real life. K3G starring Amitabh Bachchan, SRK, Kajol, Hrithik Roshan, Kareena Kapoor and Jaya Bachchan is a perfect movie to convince your parents for your love marriage. An adopted rich guy falls in love with an ordinary girl and marries her against his father’s wishes which leads to his ousting from the family. However, his younger brother forms a plan which ultimately helps his father see why he should have respected the choice of his son.

Shah Rukh Khan and Kajol are going to feature in this list again and again and you know why. There is no couple better than them in Bollywood to convince your parents for your love marriage. Raj and Simran meet in Switzerland on a trip and fall in love with each other. However, Simran’s father has already promised his friend that he would marry his daughter to his son. On learning, this Raj comes to Punjab to win Somran’s father over.

Kareena Kapoor and Shahid Kapoor were once the most talked about couple in Bollywood. Their chemistry in this film shows why people loved them as a couple. Even though life had different plans for them the film shows their love blossoming and ending on a happy note as Geet and Aditya. It follows a suicidal businessman who boards a train and meets a high-spirited girl who changes his whole perspective towards life.

Shah Rukh Khan is back again and this time with a beautiful love story with Mahima Chaudhary. The film follows an NRI who wants an Indian bride for his son. He makes his son get engaged to Ganga, the daughter of his Indian friend. However, Ganga falls in love with Arjun the foster son of Kishori Lal. Their love story is just so pure that it can melt the heart of any Indian parents.

Another SRK movie that you should use as a technique to convince your parents for your love marriage. It also features Amitabh Bachchan, Uday Chopra, Jimmy Shergill, Shamita Shetty, Kim Sharma, Jugal Hansraj, Preeti Janghiani and Aishwarya Rai Bachchan. A rebellious teacher motivates his students to fall in love and break the rules of Gurukul, a school which prohibits any sort of amorous connections.

A timeless classic starring Aamir Khan and Madhuri Dixit, Dil is a must-watch for people in love. The film follows Raja and Madhu who fall in love with each other and get married irrespective of their father’s wishes. Their fathers try everything in their power to separate them. The film shows how love conquers all animosity and it’s always best to let people be with someone who loves them.

With an ensemble cast that included Aamir Khan, Ajay Devgn, Kajol and Juhi Chawla this film is ideal for convincing your parents for your love marriage. The film follows Businessmen Ranjit and Harbanslal who want their children Ajay and Madhu to marry each other. However, Ajay and Madhu fall in love with different people and the two fathers team up to destroy their dreams. In the end, everything gets better and everyone comes on board in this fine film about love and parents.

Deepak and Aarti fall in love with each other despite never even seeing each other for once in their life. They exchanged letters and find love without even knowing the whereabouts of each other. Aarti then decides to follow her affection for Deepak and visits Delhi in hopes of finding him. It’s a beautiful love story that can convince every parent in the world for the love marriage of their children.

Guess the name is enough to do the job for you. When you are in love you don’t fear anyone, you just don’t want to hurt the feelings of your close ones that is perhaps one of the reasons you are searching for movies that can convince your parents for your love marriage. Salman Khan, Kajol, Dharmendra and Arbaaz Khan star in this film. It follows Suraj, a guy who falls in love with Muskan and tries his level best to convince his uncle and Muskan’s brother to win his love.

Sapna played by Karisma Kapoor falls in love with Raja (Salman Khan). She fears that her three uncles who have raised her would never agree for her marriage to Raja. However, Raja devises a plan to impress each of her uncles in order to win their love and ultimately get married to Sapna.

The holidays and weekend movie nights with the entire family are excellent ways to improve connection and spend...
Talent

Pagglait is a simple story of a young woman with complex emotions who becomes a widow after a...