Virat Kohli, the face of world cricket, has a fan base comparable to the world’s most popular athletes like Cristiano Ronaldo, Roger Federer, Lionel Messi, Neymar Jr. and more. He is now the 14th highest paid celebrity per sponsored Instagram post. According to the latest reports, Virat Kohli charges a massive amount of Rs 8.9 Crores per Instagram post. 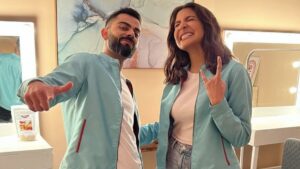 The latest report by Hopperhq revealed that Virat Kohli charges $10,88,000 for every Instagram post, which makes him the 14th highest paid celebrity on Instagram. He is only behind celebs and athletes like Cristiano Ronaldo, Lionel Messi, Kylie Jenner, Dwayne The Rock Johnson and Selena Gomez.

According to Hopperhq, Cristiano Ronaldo is the highest-paid celebrity on Instagram for sponsored posts. Reportedly the star footballer charges $ 23,97,000 per Instagram post. Nevertheless, Virat Kohli is the only cricketer among the highest-paid sports athletes on the social media platform. Ronaldo, Messi and Neymar are the other three sportsmen on this list.

Notably, Kohli charges more than Neymar Jr, Katy Perry, Miley Cyrus and Lebron James on Instagram. The popularity of this Indian cricketing legend is soaring sky as he is back in the form and will be the key to India’s success at the upcoming T20 World Cup in October 2022.

Previous articleDo You Know About This Crazy Sport? Watch Video
Next article33 Hot and Bold Pics of Jacqueline Fernandez You Need to See
Virat Verma

Users of Instagram will soon have the possibility to repost features of posts and reels created by others....
IPL

Vaani Kapoor uses social media to keep her fans up to date on her work. Moreover, she recently...
News

The meta-owned photo sharing and video sharing platform, Instagram, is introducing a music-driven experience for its enthusiastic audience....
Technology

Instagram has become the opium of the masses. Many people tend to carelessly scroll their Instar feed all...
Entertainment

Kiara Advani is one of the top actress going around in bollywood right now. Along with her  mind...
News

Instagram and Facebook are two of the biggest giants in the Social Media Domain and they are merging...
Entertainment