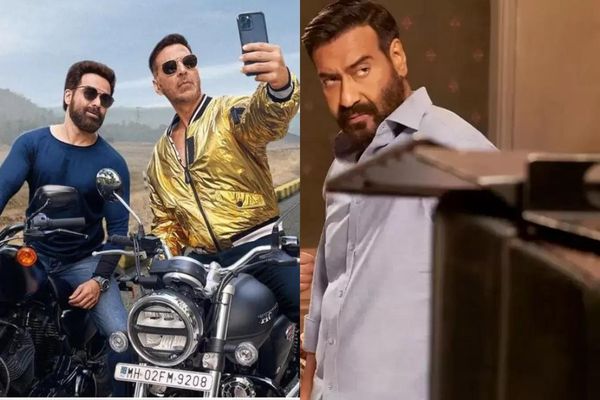 Many Upcoming Bollywood Movies are remakes of either South Indian films or Hollywood films. Bollywood has been criticised for always producing an abundant number of remakes. However, Vikram Vedha’s remake released recently proved that a film can be remade with excellence and new twists if the directors and the actors are willing to go a further mile. The film has raised the bar for upcoming Bollywood remakes in 2022 and 2023.

Drishyam 2, releasing on 18th November 2022, is one of the most awaited upcoming Bollywood remakes. The film is based on a Malayalam film of the same name. In fact, the first part of this movie was also a remake. Drishyam 2 will feature Ajay Devgn, Tabu and Shriya Saran in the lead roles. The movie is a mystery thriller directed by Abhishek Pathak.

This upcoming Bollywood action-thriller is a remake of the 2011 French film Nuit Blanche (Sleepless Nights). The movie will star Shahid Kapoor in the lead role. It is directed by Ali Abbas Zafar. The film was officially announced in August 2021. Shahid Kapoor will play the role of a loving father who is trying to save his child from the Mafia. Bloody Daddy will be released in 2023 in the theatres.

Ajay Devgn and Tabu are featuring in another upcoming Bollywood remake. This movie will be the remake of the 2019 Tamil film Kaithi which starred Karthi in the lead. Bholaa is going to release in the theatres on 30th March 2023. The film is directed by Dharmendra Sharma and follows a prisoner who is looking to meet his daughter after serving his sentence, only to get interrupted by a drug raid.

If you through upcoming Bollywood remakes in 2022 and 2023 will only include South Indian and Hollywood films, then you are proven wrong, as this Sonam Kapoor starter is a remake of a 2011 Korean film of the same name. The movie, directed by Shome Makhija, will follow a blind police officer on the hunt for a serial killer. The movie will release in 2023 on one of the OTT platforms.

Kartik Aryan is also joining the list of celebrities who have worked in Bollywood remakes with his upcoming action drama. It’s a remake of Allu Arjun’s 2020 Telugu film Ala Vaikunthapurramuloo. The movie was announced in 2022 and will release in the first half of 2023. Kiara Advani will feature as the female lead in this film. Rohit Dhawan is directing this remake.

Another Malayalam that has joined the long list of upcoming Bollywood remakes in 2023. Sanya Malhotra, the Bollywood actress, announced the film via her Instagram. The Great India Kitchen was released in 2021 in Malayalam language and followed a newly web couple as they struggled to navigate their new lives after entering into the bond of marriage. Arati Kadav is directing the remake.

Amitabh Bachchan and Deepika Padukone will feature in this remake of the 2015 Hollywood film The Intern. The original movie featured Robert De Niro and Anne Hathway in the main roles. It will follow a man in his 70s who thinks he is not cut out for retirement and applies as an intern at an online fashion website. Amit Ravindernath Sharma is directing this Bollywood remake which will release in 2023.

We all have watched Chiyaan Vikram’s great performance as a man suffering from multiple personality disorders on our televisions. He nailed the role, and we always thought how wonderful it would have been if there were more parts of this story. Well, not exactly a part, but a Bollywood remake of Anniyan (Aparichit) is in the works and may feature Ranveer Singh in the lead. The movie has run into some legal troubles, which may push its release to the year 2024.

Akshay Kumar and Emraan Hashmi are starring in this upcoming Bollywood remake of the 2019 Malayalam comedy movie Driving License. The film is directed by Raj Mehta and also features Diana Penty and Nushrratt Bharuccha. It follows a film actor who is the need of an urgent driving license which one of his fans, who happens to be a motor vehicle inspector, promises to deliver to him by illegal means. However, things go awry between them, and they develop a hateful bond. The movie is going to release in the first half of 2023.

Janhvi Kapoor, the current talk of Tinseltown, will feature in this survival thriller upcoming Bollywood movie in 2023. The film is a remake of 2019’s Malayalam film Helen which traced the journey of a nurse who suddenly goes missing with no clues being left behind. Mili is being directed by Mathukutty Xavier.

Soorarai Pottru is a Tamil film which was released in 2020. The movie featured Suriya as a man who has a dream of launching his own airline despite coming from an obscure village. It’s an inspirational drama which is being remade with Akshay Kumar in the lead. Sudha Kongara directs the remake. It is expected to release in 2023.

Are you excited about any of the upcoming Bollywood remakes in 2022 and 2023? Do let us know.

We all enjoy watching movies, and the Film directors are the ones who truly make them so. These...