Amazon Prime Video has firecrackers lined up for the month of may. Prime video is starting may with a bash. With an amalgam of intriguing Indian and international releases, the first week of May will see the release of the new, most awaited documentary, The boy from Medellin. The show is much anticipated for the Colombian singer and international music sensation J Balvin’s trip back to his hometown. 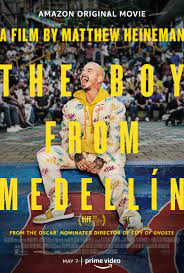 Along with this International treat, a Marathi drama is also releasing in the first week of may. The film features Neena Kulkarni in the lead role.

Here are top 5 shows releasing on Amazon Prime Video in the month of May:

Matthew Heineman experiments a new documentary with J Balvin in the show- the boy from the Medellin. The documentary follows J Balvin on a trip back to his hometown where he is buckling up to perform a show at a packed up stadium.

Featuring Neena Kulkarni in the lead role, Photo Prem is a Marathi comedy drama that narrates the tale of a housewife who is photophobic and is going through a life-crisis of getting a proper picture snapped for her later generations to remember and cherish her.

Featuring Farhan Akhtar, Toofaan is a sports oriented drama, directed by Rakeysh Omprakash Mehra. It narrates the life story of a local goon who’s fate changes upon discovering the art and power of boxing. The film concentrates on him getting trained by Paresh Rawal in Dongri, Mumbai, highlighting the transition that Akhtar undergoes.

4. The underground Railroad: May 14th

This new Amazon original limited series is inspired by the novel of the same name written by Colson Whitehead for which he was felicitated with the renowned Pulitzer prize. This enthralling story narrates the tale of two courageous and brave slaves who escape the plantations in the United States during the 19th century through Railroads owing up to its title.


A new Spanish adaptation of the Last one laughing, LOL features Gaurav Gera in the lead roles. It is highly recommended that you give the Indian debut of the show- Hasse Toh Phasse a go before the Spanish version.

Those were the times when very few people had an interest in Test Matches, but nowadays the trend...
Entertainment

It has been 12 years since the first episode of the family show Taarak Mehta ka Ooltah Chashmah...
Talent

Rakshabandhan is just around the corner and the brother-sister duo's are ready to celebrate a whole day dedicated...