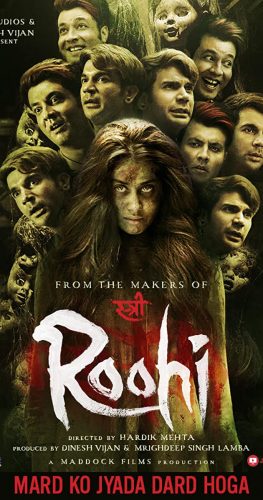 Roohi, a recent Bollywood film featuring top artists such as Rajkumar Rao, and Varun Kumar, Jhanvi Kapoor in the lead, is a mix of eccentric elements that delivers a psychedelic comical horror show.


Much like Rajkumar’s previous horror movie Stree, Roohi is set in a small town where two boys, bahura and kattanni, fall in love with Roohi under bizarre circumstances. 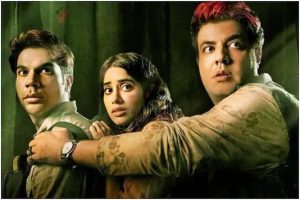 The story narrates the life of a witch- Afza, the second personality of Roohi, who was victim to misogyny and is now seeking revenge by looting the brides from their husbands on their wedding nights.

The witch, much like stree, has a dual personality and hides under a timid human veil when the times demand her to.

However, what lies apart from stree is that the male leads fall for her two different personalities- the timid Roohi and eerie Afza, thereby creating funny conflict over several occasions.

While for long, Bollywood has not received any fruits for its horror projects and almost abandoned the tragic, horror-comedy concept, Hardik Mehta, director of Roohi, has boldly taken up the theme. Although it draws certain similarities from past stories, the crew has quite splendidly portrayed the ghastly concept.


The casting is done fittingly, and all the main leads seem to gel and complement each other’s acting well.

After his last horror hit, Rajkumar is once again in form with his silly light-headed smile and funky hair. His timely deliver and body language fits so chic with Jahnvi’s dual personality that one actually ships them hard.

Yet again, he might be progressing into getting stereotyped, taking up the same role for long.

Varun Kumar, on the other hand, flexes hard with his great timings with comedy and flawless expressions. His ability to perform comedy with ease and match the vibe with the film’s dark theme is one of the main highlights of Roohi.

Jhanvi aces her dual role as both the scary Afza and timid Roohi. The chills we get from her portrayal cannot be missed.

Despite good teamwork and varied, entertaining references from other films, the movie, like all horror flicks, lost its path on the way to its destiny.


Intriguing at the start, the director missed significant elements to narrate the reason for the ploy spread by Afza the witch and didn’t focus much on the past life of Roohi in-depth to highlight the main reason for her anger apart from patriarchal oppression. The movie as a whole could have used a few more edits and fixed its ‘quite the haphazard ending.’

Either way, the film was not at a total loss. It is much appreciated for its twists, ambiguous yet intriguing storyline and, of course, the foot-taping music produced by Sachin-Jigar.

When you hear the word "Indian horror series and movies on Netflix, your expectations drop almost instantly. You...
Entertainment

Double XL box office collection day 1 is estimated to be around Rs 30 Lakhs. The movie is...
Talent

If we have to suggest a name of an actor who stole many hearts with his stupendous and...