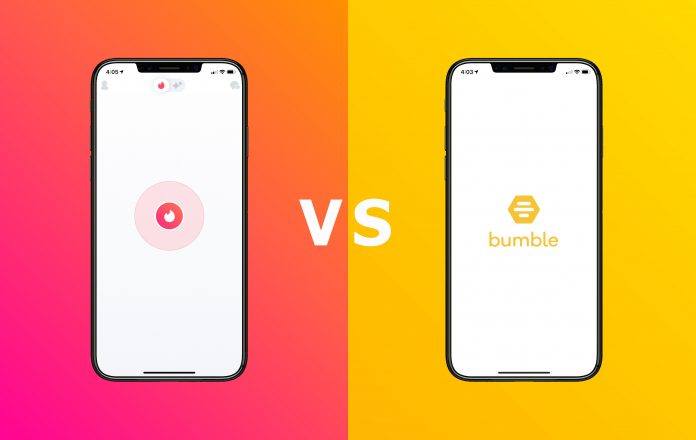 In this modern era, everyone is stressed with something out of their controls,  everyone feels that they need someone in their life with whom they can spend good time, a good laugh. That is why, after seeing the importance of having someone in life, forced Sean Rad – founder of Tinder, and Whitney Wolfe Herd – founder of Bumble, to build dating applications that will resolve the hardship in finding a soul mate.

But does this modern generation is using these apps in such a way they were meant to be used? The answer to this question is hidden somewhere in between this article which will brush up your knowledge about these applications.

Bumble or Tinder are highly used apps all over the world whether to find someone for dating or for hook-ups. But when an online survey was conducted, the results were really surprising as Bumble turned out to be a dating app as compared to Tinder which was highly elected for hook-ups. But still, many people prefer Tinder a better platform for multiple matches, and on the other hand, many prefer Bumble’s female-first approach as it satisfies the other person that the lady is really interested in having a real conversation.

The best part of Bumble is that it gives ladies a chance to make their first move and to initiate a conversation, plus recipients only have 24 hours to respond to the first message otherwise it will get unmatched automatically, which urges them to take necessary actions so that they won’t lose their new match. But Tinder doesn’t provide this feature, once both the profiles get matched anyone can start a conversation and there is no time limit for responding. Now, Tinder is filled with many fake accounts, which sometimes become a major concern if both the young ones are planning to meet each other.

But at last, it all depends on person to person what they actually want, whether he/she is looking for a perfect date or just want hook-ups, that is their choice. According to a report, many people go where there is a vast majority of people, like in a night club. They feel that this is the real place where they will find unknowns for hook-ups, that is why Tinder is densely populated for the same reason as rumors keep spreading every time to a bigger radius.

Tinder is one of the earliest online dating apps yet the oldest which is still famous in the dating world. With time, Tinder’s reputation changed from dating to a hook-up app which is not a bad thing at all because ultimately it is the user’s choice whether if they want to hook-up then they should freely use Tinder and if they are looking for a real date then they should rely on Bumble. A current report says that 22 percent of Tinder users use the app for hook-up only, and if hook-up is the only thing that they really want out of a dating app, then Tinder is an easy choice for them.

ALSO READ: Simple Steps To Get 6 Months of Tinder Plus Subscription For Free

The lockdown is finally heading towards, Unlock 1.0, an end, and now that we're into it for almost...
Technology

Mobile apps are one of the best and smartest ways to build a brand presence. It can help...
Technology

After delaying the launch of FAU-G (Fearless and United Guards) for so many days, nCore Games have finally...
Offers

Tinder is one of the apps that we all have on our phones as this era is not...
News

Boycott Chinese items – this motto has been talk of the town for the last 2 years in...
News

With the sudden rise in the number of cases of the coronavirus, people are panicking and the whole...
Technology

Press release conducted by the RBI governor Shaktikant Das today has been done today in order to shoulder...