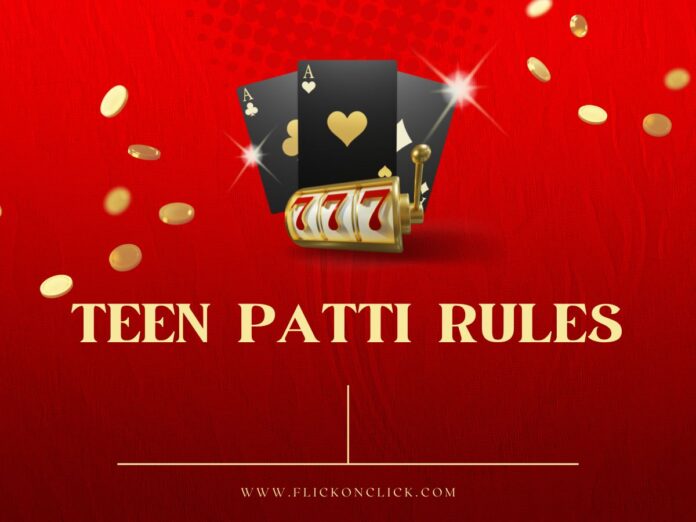 Teen Patti is an interesting and exciting card game that’s played with three cards being dealt to every player. It is becoming immensely popular in India with digitization as people want to extract fun from online games and activities. Almost all of us have come across the word Teen Patti in our everyday lives, but only a few understand the Teen Patti Rules that make this card game an interesting contest that you can play for hours. Here, we have broken down the full Teen Patti rules to help you easily understand how this card game works.

How to Play Teen Patti?

To begin with, Teen Patti is a card game that’s played with 52 cards in total and ignores the last card of Joker in the deck. There are four suits, namely Spade, Heart, Diamond and Club, in these 52 cards. Each suit has 13 cards. Before the game commences, these cards are shuffled to avoid any chance of cheating and coincidences.

Once the game beings, a bet is placed. Notably, only three to six members can play Teen Patti at once. The dealer deals three cards each to the players. All these cards are dealt face down to avoid any revelation of the cards to other players. Usually, a fixed amount is placed at a bet, which can be called or raised by the players during their turn. A call (chaal) by a player in Teen Patti indicates that he/she will continue in the game but won’t raise the bet.

On the other hand, a raise by a player indicates that the ongoing amount in the game has been doubled. In Teen Patti, one can’t raise the amount by a significant margin by his/her will. The amount only doubles every time with each raise. For say, when the first player called for a raise, the betting amount was Rs 2,000, then after the raise, the resulting amount after the raise will be Rs 4,000. Now, if another player wants to raise the bet, the betting amount will only double from Rs 4,000 to Rs 8,000.

Your goal should be to have a hand with a combination of three cards that can help you win the game. Below we have listed the combinations from highest to lowest ranks:

If you have three similar cards, for example, three aces or three queens or three kings, then you can form a Trail. 2s are the lowest of the Trail, while Aces are the highest. The sequence runs from three 2 to three 3 and continues in increasing order.

Suppose you are A and playing with your B and C. The dealer has dealt the cards to you people, and you have gotten a trail of three 2. Now, you are over the moon and think you have already won the game. You continue to raise the bet with each chaal. At last, you end up betting your entire savings.

Plot twist- C has also secured a trail, and his poker face has fooled you right throughout the game. What happens now? Obviously, C is gonna make you go bankrupt as you have already gotten the lowest of the Trail. His Trail must be higher than yours. So, always pay attention to the Teen Patti rules to avoid running your savings into the ground.

Also Read: Spice up your monotonous weekend with the 7 best gaming arenas in Noida

Three cards of the same suit and a sequence in either increasing or decreasing ranks.

Three cards of any suit but in a particular sequence in either increasing or decreasing ranks.

For example- If you have a 2 from Spade, 3 from Diamond and 4 from Heart, you can call it a sequence in Teen Patti.

Three cards of the same suit. The sequence of the cards doesn’t matter in this case.

Virat and Tanuj are playing Teen Patti, and both have three cards of the same suit. Virat has A, K and J and Tanuj has A, K, and 10. Now, in this case, Virat will win.

Note: There is no colour ranking. The three cards you have should be ranked higher than your opponent’s to win the bet.

Two cards of the same rank. Suppose both players have a similar pair, the player with the third card that ranks higher wins.

Tanuj and Tanya both have a pair of queens, but Tanuj’s third card is an ace, while Tanya’s third case is a 10. Here Tanuj will win the bet.

Suppose you are high on bad luck and don’t get a sequence, pair, or anything that can make you easily win. But don’t worry; you can win by having the highest card if your opponent has failed to secure any pair, sequence, Trail or colour.

Teen Patti Rules at a Glance:

PlayStation 5 or PS5 has become one of the hottest topics in the gaming community. Trending on Twitter,...
Technology

7 Best Skins for the FAMAS

Counter-Strike: Global Offensive is a first-person shooter game that has been around for a while now. In that...
Entertainment

Recently, a new challenge was introduced by tech giant known as the Google ‘Stay and Play at Home’...
Offers

It is a ‘To Be On Cloud Nine’ moment for enthusiastic gamers as Amazon Sale is announced, its...
Technology

Never Have I Ever is a fun drinking game that's perfect for playing with your friends on a...