Pathaan starring Shah Rukh Khan and Deepika Padukone, is going to release in the theatres on 25th January 2022. Shah Rukh Khan is making a comeback to the big screen after almost three years. His last film was Zero opposite Katrina Kaif and Anushka Sharma. Here we have covered Pathaan box office collection prediction. 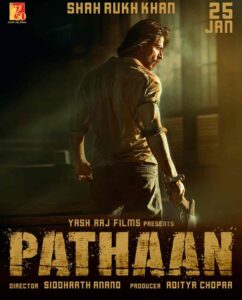 Shah Rukh Khan’s last film, Zero, failed miserably at the box office and earned only Rs 186 crores despite being made on a huge budget of Rs 200 crores. Since then, he has not made any movie, and Pathaan will be his best bet to set the box office on fire.

Shah Rukh Khan will be hoping for Pathaan’s success as the other films in the YRF Spy-Verse have done phenomenally. War starring Hrithik Roshan collected Rs 465 crores at the box office and made a profit of Rs 325 crores over its budget. On the other hand, Tiger Zinda Hai featuring Salman Khan and Katrina Kaif collected a huge sum of Rs 565 crores despite being made on a budget of Rs 125 crores.

Pathaan is being made on a huge budget of Rs 250 crores. The Yashraj production house is heavily banking on this film to be a cash cow at the box office. Shah Rukh Khan’s Pathaan is expected to collect more than Rs 600 crores at the worldwide box office. The film will most likely breach the Rs 100 crore mark at the box office in the first three days of its release.

The film will feature Shah Rukh Khan and Deepika Padukone as the protagonists, while John Abraham is going to play the role of the antagonist in this movie. Salman Khan and Hrithik Roshan are expected to make cameos in the high-budgeted action movie. Recently Shah Rukh shared a photo on his social media handle in which he hinted that he is also eagerly waiting for the film’s release.

If you liked our Pathaan Box Office Collection Prediction, don’t forget to share it with your friends and family.

Many worldwide entertainment lovers now consider OTT home. The days of viewing movies on tv or even going...