Lovebirds Kiara Advani and Sidharth Malhotra are often in the news for one reason or another. The Sherhshaah Jodi is the talk of the B-town at the moment. Whatever they do becomes news and spreads like wildfire on social media. Both stars have created a huge fandom that shares about them all day and night.

Recently this morning, Kiara Advani posted a love message in the tone of her character from the film Shershaah. Her PDA will make you blush. She wrote in her Insta story, “@sidmalhotra tu baatein toh badi badi karta tha, par tu bhi na ‘Out of sight, Out of mind’ type ka banda nikla”. 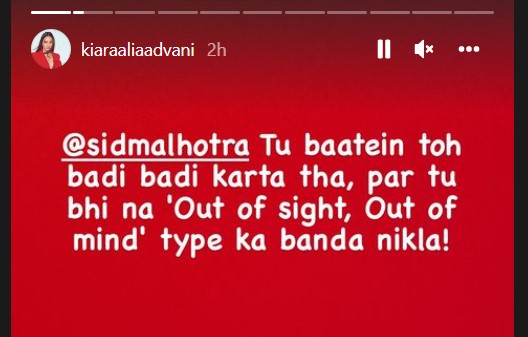 Kiara Advani then again posted a story in which she included a screenshot of Sidharth Malhotra’s Insta story. This time she wrote, “Ok then it’s a date! We’ll be live on Instagram at 6 PM today.” 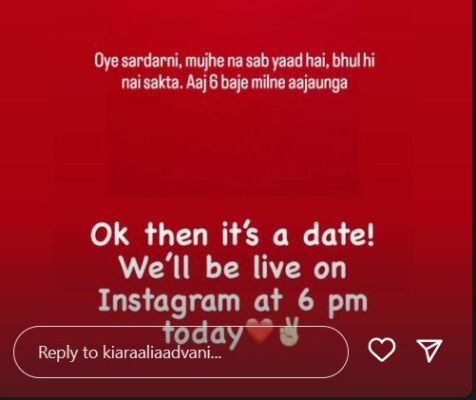 For those who are thinking that Kiara Advani and Sidhartha Malhotra have openly confessed their love, there is a twist in the tale. As their tone suggests, the couple is actually celebrating the one glorious year of their blockbuster, Shershaah, which was released last year on 12th August 2021.

So do not forget to tune in on Kiara’s Insta live to witness their celebration about Shershaah and watch the few cute moments between a couple of the moment.

Previous article
Laal Singh Chaddha Review: A Bit Too Much of A Faithful Adaptation
Next article
10 Best Patriotic Bollywood Movies That Will Give You Goosebumps
Virat Verma

The meta-owned photo sharing and video sharing platform, Instagram, is introducing a music-driven experience for its enthusiastic audience....
Entertainment

This new sensation who stepped into Bollywood some time back and let everyone go gaga with her sheer...
Lifestyle

Whether you should go back to your ex or not?

Going back to your ex is a very confusing topic nowadays that whether you should look back to...
Entertainment

Over the years, Bollywood has produced some of the most romantic love stories ever! Whether in actual situations...
Lifestyle

Planning to take your loved ones for a romantic dinner in these romantic restaurants this Valentine’s? Then you...
Entertainment

During the time of coronavirus, Instagram has ramped up their game and introduced food delivery through its app....