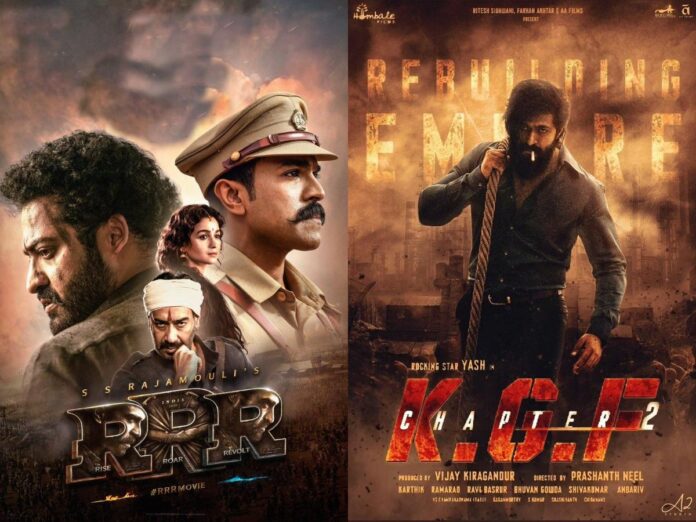 Brahmāstra, one of the year’s most anticipated films, was released in theatres on September 9. The Ranbir Kapoor and Alia Bhatt movie has grossed more than Rs 100 crore at the box office in India during its first week, making it one of the best Indian blockbusters this year to do so.

On the other hand, the Mani Ratnam movie “Ponniyin Selvan” featuring Vikram and Aishwarya Rai has crossed the approximately 500 crore mark worldwide. Ponniyin Selvan I was aired on September 30th. So Flickonclick has listed the 10 Best Indian Blockbusters that break the record at the box office collection by earning more than Rs 300 Crores

According to IMDb and other media stories, K.G.F: Chapter 2 grossed Rs 872.6 crore at the Indian box ticket on a budget of rupees 150 crore. The Kannada-language drama is scripted and choreographed by Prashanth Neel, and it is created by Vijay Karaganda. It features Yash, Sanjay Dutt, Raveena Tandon, Srinidhi Shetty, and Prakash Raj in the major roles.

Ponniyin Selvan starring Vikram and Aishwarya Rai in major roles has earned Rs 500 Crores approx. in the world’s box office collection. Ponniyin Selvan will continue to play in Tamil Nadu for another 5 days before other Indian blockbusters take over on the festival of lights. The bulk of cinemas in the state is showing Ponniyin Selvan in its 3rd week. The picture is also doing well in the international market.

Vikram, a Telugu movie scripted and channeled by Lokesh Kanagaraj and created by Raaj Kamal Films Worldwide, is the year’s fourth-earning Indian movie. According to ABP, Vikram, a replica of the 1986 film of the same name featuring Kamal Haasan, Vijay Sethupathi, and Fahadh Faasil, grossed Rs 301 crore at the box office domestically. It was made on a Rs 150 crore budget.

The Kashmir Files is a movie about the migration of Kashmiri Hindus from Kashmir in the nineties, was filmed for an expenditure of only Rs 15 crore, according to DNA, but it generated a stunning Rs 250 crore nationally in a month of release, according to Hindustan Times. The Kashmir Files, authored, directed, and financed by Vivek Agnihotri, is now one of the best Indian blockbusters in 2022

Our list of best Indian blockbusters with the highest box office collection is incomplete without this movie. The movie was made on a very high expenditure of Rs 400 crores Approx. But Brahmastra didn’t do well if we compare its earnings with the budget but it surpass the 300 crores figure and became one of the Indian Blockbusters that earned more than Rs 300 Crores at the box office.

S S Rajamouli’s Baahubali 2 is a medieval action thriller. The film is a sequel to ‘Baahubali: The Beginning,’ and it features Prabhas and Rana Daggubati in prominent roles. The movie is both one of the highest-grossing pictures in the Indian film industry and one of the most costly films ever filmed in India. Made on a budget of approximately 250 crores, the film grossed Rs 510 crores in India alone, making it one of the first Indian blockbusters to reach the 1000 crore milestone.

Bajrangi Bhaijaan starring Kareena Kapoor Khan and Salman Khan is one of the best Indian Blockbusters to cross a box-office collection of Rs 320 crores. The movie made on a budget of Rs 90 crores enjoyed huge success in India and worldwide with a unique plot and storyline.

Dangal a biopic about the Phogat family, was Aamir Khan’s second significant admission into the Rs 300 crore group. Nitesh Tiwari made the film, which was aired on December 23, 2016. The film grossed Rs 387 crores in India despite having a cost of Rs 70 crores.

Sultan a sports melodrama produced by Ali Abbas Zafar was Salman Khan’s second Rs 300 crore movie. Anushka Sharma, Randeep Hooda, and Amit Sadh also made appearances in the film. On July 6, 2016, the film was released globally. It made Rs 300 crore in India and Rs 623 crore globally.

The Bengaluru police detained Siddhanth Kapoor, the son of Bollywood actor Shakti Kapoor after he tested positive for...
Entertainment

Double XL is an upcoming Hindi satirical comedy featuring Huma Qureshi and Sonakshi Sinha. A trailer for the...
Entertainment

The most awaited announcement is out. Finally, our eyes got to see what they were demanding for so...