How to watch 83 Movie for free with Netflix and Hotstar subscription? 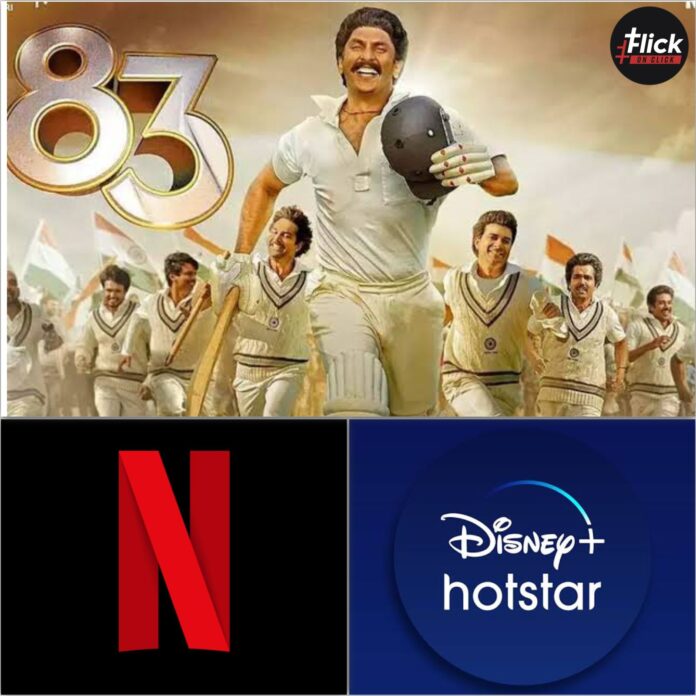 The film 83, starring Ranveer Singh, was premiered in theatres in December 2021. However, due to the widespread transmission of COVID-19, the picture did not perform well in theatres. It was just a matter of time until it made its way to OTT platforms. Furthermore, it was previously announced that both Netflix and Disney+ Hotstar had secured the rights to the same. Here is how you can watch 83 Movie for free with Netflix and Hotstar subscription.

83 Movie on Netflix and Hotstar:

All stages of its release cycle have been finished, and 83 is now available to watch on Netflix and Disney+ Hotstar beginning today, March 21. This is the most cost-effective approach to viewing movies online in India. On December 24, 2021, 83 was released in theatres across the nation.

It implies the film was in cinemas for nearly 3 months or 12 weeks before being broadcast into our homes, which was longer than the eight-week window that the makers had hoped for, most likely due to the January Omicron waves of the existing COVID-19 epidemic. In 83, Ranveer Singh represents Kapil Dev. It is the finest cricket film on India’s historic World Cup finals triumph over the West Indies. The film was directed by Kabir Khan. Considering the scale and content of the film, this Sajid Nadiadwala, Deepika Padukone, Vishnuvardhan Induri, Kabir Khan Reliance Media, and Phantom Films production was expected to be a significant success by the end of 2021. However, due to Covid 19 pandemic, the film was not able to achieve its standard.

In 1983, Ex captain Kapil Dev guided an unlikely Indian team to the country’s first World Cup victory. The film 83, created and directed by Kabir Khan, tells the tale of this team, which taught a nation to trust and place its hopes in its cricketers by returning home as a bunch of incredibly gifted world champions.

In the first few minutes of the film, Kabir Khan uses an ingeniously constructed passport sequence to introduce the audience to the performers. He also uses speech and informal conversations to show the truth: Indians did not expect India to win the World Cup. That’s when you realize this film isn’t about worldwide conquest; it’s about gaining notoriety.

Yes, 83 plays on the topic of nationalism far more than is needed. The tone of the picture would have highlighted the point that the rhetoric scenes were aiming to make. ’83 had the opportunity for some fantastic music, which may have sped up the tale. But, once again, Kabir Khan sets the benchmark for himself.

How to watch 83 Movie for free on Netflix?

How to watch 83 Movie for free on Disney + Hotstar?

We Flickonclick offer you with the most recent hacks to get a free Hotstar subscription in 2021. Hotstar is...
Offers

Everything You Need to Know About the Jio Postpaid Plus plans and Its Exciting Offers.

Free Hotstar Subscription Tricks: Hotstar is one of the premium digital streaming services in India. In addition to...
Offers

Netflix is a website or streaming service that can entertain you online. Hollywood movies, TV shows, and Netflix...
Offers

Reliance Jio Postpaid Plus Plans now give you a free subscription to Netflix at no extra cost. The...
Offers

Netflix is a website or streaming service that can entertain you online. Hollywood movies, TV shows, and Netflix...
Offers

Airtel never disappoints its customers when it comes to newly improved recharge plans. Recently, the telecommunication company has...
Offers

How To Get a Free Hotstar Subscription? Here Are 5 Best Tips