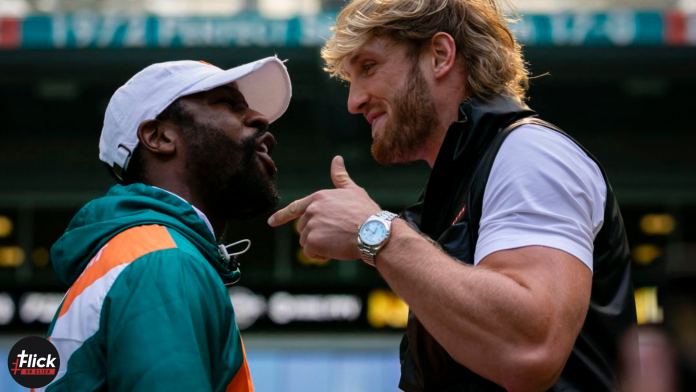 Floyd Mayweather is coming back in the ring for an exhibition match with Logan Paul on the 06th of June in Hard Rock Stadium in Miami, Florida, Now, this is the second time he’s back in the ring since he ended his legendary career in 2015.


The last time was Connor Mcgregor, who is an MMA champion as he challenged him to a fight, which Connor lost very tremendously as well. 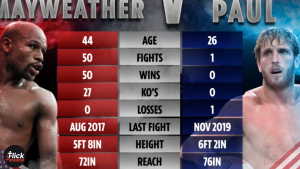 Now, This fight will be different from your regular boxing bouts. The rules have been changed a little and here they are.

Now, the premier of the same will start at 05:30 in India on June 6th. But unfortunately, it is not available for streaming as of now and is only available in the US and UK for a pay per view model.

But we’ll get a full match clip soon after the match and well! There’s Twitter for everything, right?

Floyd Mayweather is not a name that you take with disrespect when it comes to boxing or maybe in general, as the man can pound you into a bag of garbage in just mere few seconds literally.


For those unknown, Mayweather started in 1996 and ended his career in 2015 and has won fifteen major world titles in 5 different weight classes. In his full career, he has a clean record and was undefeated till he retired. He played a total of 50 matches in his career and won them all including 27 wins by knockout and no losses.

In 2016, one year after he retired, the man was named by ESPN as the greatest boxer, pound for pound, in the last 25 years. He has been known to end boxing careers and well he do it gracefully.

Talking about Logan Paul, his life has been rather a on display and he has been known for his notorious acts ever since he started. While Floyd Mayweather has massive respect among all circles, Logan is mostly disrespected wherever he goes. Sometimes by the audience and at other times by the media itself.

He made money at a very young age by the use of his Youtube Channel where he used to do crazy stuff. Now, with that, he switched to a very big house, luxury cars and whatnot. But now he’s onto winning respect for himself as well and started competing professionally.


Even if he loses against Mayweather, which is what we all predict, it’s would mean something and add to his experiential record. Moreover, he gets to fight Mayweather so early in his career, that’s something of its own. Not many boxers get that.

Also, Mayweather is known as the money man and Logan Pual also hauls in a hefty amount of money for whatever he does. This is why they both are getting quite a generous amount of reimbursement from this boxing match.

Which is something that has set the boxing community on fire as Logan Paul has made a joke out of everybody who works hard and non-stop for days just to enter the ring. Due to his notorious fame, he got a shot with Mayweather and maybe what next but then again, who are we to decide. Let’s see how this rollout.


Previous articleGetting A Swipe Right on Dating Apps Has Been Made Easier for Those Who Are Vaccinated
Next articleWorld Environment Day 2021: India’s Top 06 Environmental Issues That Needs a Solution
Flickonclick

Youtube is one of the world's most popular video streaming services as of now. The scale of popularity...
Fitness

Are you suffering from not being able to workout in the gyms you recently paid for and got...
News

A check has been placed on the YouTubers outside the American region. Google has recently made a thunderbolt...
Lifestyle

If you are a UPSC aspirant then you must know that each second and minute of your life...
Entertainment

The 5th and last episode of TVF Aspirants are out and available on Youtube for you to watch...
Entertainment

Covid-19 has completely halted our plans to celebrate the new year like before. Where lots of countries are...
Lifestyle

CAT the common aptitude test for MBA is one of the toughest exams in the world. The difficulty...
Entertainment

Comedy has been reduced to vulgarity and offensive remarks in mainstream movies and shows. However, many web series...