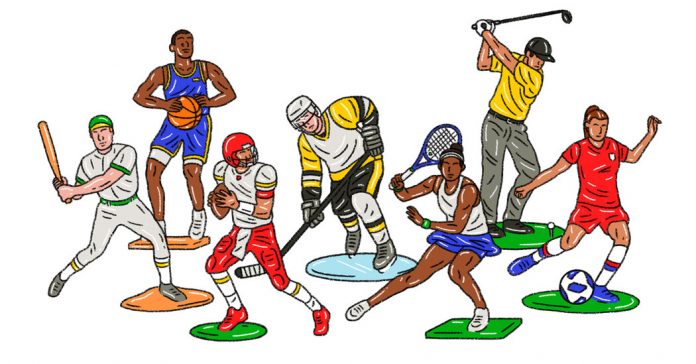 We have heard of football. Cricket, basketball, badminton, and many other sports. And, actually, we have played them for our own entertainment. But we never got to know that there are other sports which are also popular like these sports in their respective originated countries but not renowned on an international platform, but still, they are quite famous and championships are being held every year.

So, we have prepared a list of all these sports which we haven’t heard before and nowadays their craze is being spread in different countries too.

Who could have imagined that people can race on lawnmowers too? It is an off-road race and it is real motorsport where people modify their lawnmowers but keep the original engines and remove the blades for safety.


The trend of this race had started in 1963 and every fourth of July it is being continued in Twelve Mile, Indiana. This race only allows 33 driver participants who have to cover 60 laps which cover up to a total of 15 miles.

It is an enjoyable sport in which husbands carry their wives on their backs and race through an obstacle course. This sport is played in Sonkajärvi in Finland. The Wife Carrying World Championship has been continuously being held since 1992 and the winner gets beer equivalent to the weight of his wife. Nowadays, this sport has reached many countries like Germany, India, Hong Kong, United States, and the United Kingdom.

Yes, it is exactly what you are thinking after reading the name: chess and boxing. Combination of two sports exactly which appeared in 1992 in a comic book illustrated by French artist Enki Bilal. And the art was given a real-life form in 2003 in Amsterdam, and it has been continued since then.

There is a total of 11 rounds in the game comprising of six rounds of chess and 5 rounds of boxing, a player can win either by beating his opponent in chess or by a knockout in boxing.

This is really an exciting sport in which players have to sneak in their heads and upper bodies inside a giant bubble and normally kick the ball with the foot. This sport first appeared in Norway in 2011 and since then it has been continued. There will be two teams competing with each other and each team should have five players and one must be a female player.

This sport is played in Southwest China’s Guizhou province, and competitors have to stand on a single 20-foot-long bamboo pole and have to move forward with the help of thin bamboo. Actually, before considering it a sport, bamboos were used as a mode of transportation, and today these bamboos have been replaced with more durable fiberglass.

We all have heard of arm wrestling but hearing about toe wrestling gives a little bit of surprise, isn’t it? In this sport both the opponents lock their feet and try to pin each other down. This sport was originated in the United Kingdom.

Consider this a next-level kind of boxing where opponents fight each other in a ring that is inside water. Muhammad Ali used to train for his matches like this and this sport has been inspired by his training. The players have to hold their breaths at the time of fighting, this results in an increase in concentration and focus.

The rules are completely the same, except boxers have to hold their breath for one minute at a time for three rounds and come up for air in between the rounds.

This sport requires two opponents sharing the same log and the job is to knock out the opponent by spinning the log and off-balancing your opponent. This sport was originated in the late 1800s. After it gets recognition, many companies starting giving sponsorship, and this sport is always held in summers. The U.S Log Rolling Open is held every June.

The fictional sport in Harry Potter movies took real-life form, but players do not fly around, instead, they compete with each other on foot. There will be two teams competing with each other, every player has to hold the broomstick with one hand and the other hand will remain free to carry the ball.

We never imagined that sheep counting could ever become a sport in real life. But here we are with a new sport that we are hearing for the first time. Actually, this is an old sport and the first sheep counting competition was held in Australia in 2002. Approximately 400 sheep dashed past 10 competitors who tried to count the exact number of sheep whose estimate was close to the exact numbers is considered the winner.