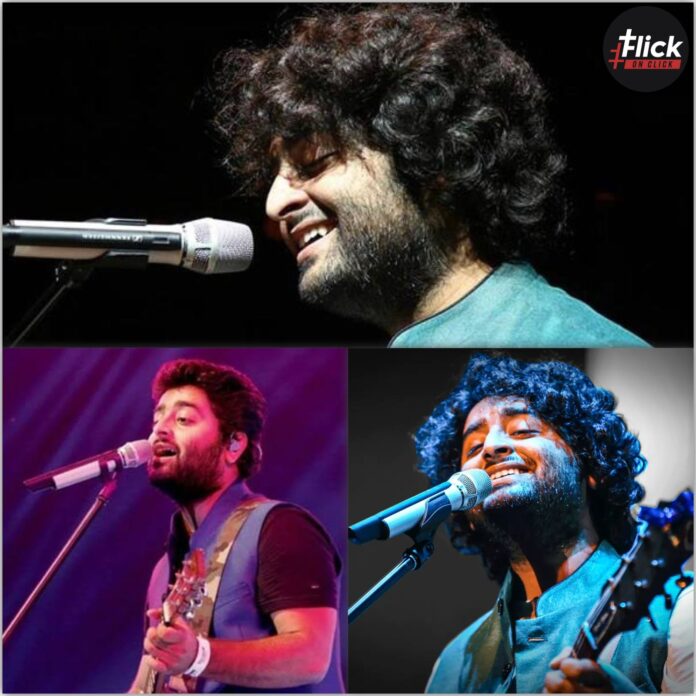 Arijit Singh composed one of the best soothing songs, regardless of genre, and will always be admired for his voice. He is one of Bollywood’s most popular vocalists. Almost every song he has sung has been a tremendous superhit, from sorrowful to romantic to happy and lively.

Arijit Singh one of the hit songs have become associated with Bollywood songs in recent years since there is a lengthy number of songs that one may listen to and never get weary of his lovely voice. He adds incredible flavor to his melodies, making him the king of all emotions.

In this article, we will look at the top ten Arijit Singh songs of a singer that worked hard to achieve fame and has millions of followers all over the world. Whose voice is so wonderful that anybody who hears his song falls in love with him.

In this post, Flickonclick will look at the top 10 Arijit Singh songs of all time.

Arijit Singh provided his voice-over for several songs in the film Aashiqui 2, one of which being “Tum Hi Ho,” and this track altered Singh’s life. Singh became an overnight sensation as a result of this song. Arijit Singh’s fan base and demand grew as a result of this song. Following the release of this song, he began to receive numerous songwriting opportunities. This song has been viewed by about 600 million people on YouTube. Mithoon composed the song, which was released by Bhushan Kumar’s T-Series studio.

Arijit Singh’s track “Half Girlfriend” from the film Half Girlfriend is one of his greatest. This song has been viewed by over 950 million (95 crores) viewers on YouTube. This song’s lyrics were penned by Manoj Muntashir. Mithoon composed the soundtrack for this song, which stars Shraddha Kapoor and Arjun Kapoor in the main role. In 2017, this soundtrack was recorded. Even after so many decades, many people still love this song.

This is Arijit Singh one of the most famous, popular & successful song. This track is also beloved by many of his followers. This song was included in the 2014 action crime thriller Ek Villain. Mithoon authored the words and also composed the music for this song, which was entertained by Sidharth Malhotra and Shraddha Kapoor. This song has been viewed by over 200 million people on YouTube. This song was released by Bhushan Kumar’s T-Series brand.

In the year 2019, this single was produced. The song Thodi Jagh was used in the movie Marjaavaan. Tanishk Bagchi composed music for this track, which was written by Rashmi Singh and Virag Mishra. Arijit Singh performed this song. This song became incredibly popular in 2019. This song has been watched by over 200 million individuals on YouTube.

The Raabta or Kehte Hai Khuda Ne is a beautiful and heartfelt song. It’s difficult to sing a melody without pausing multiple times. The long-lasting line cannot be easily captured, but not for Arijit, who can simply sing all types of tunes. That’s why he’s given so many mega-hit Bollywood tunes. This song’s lyrics and vocals are both wonderful. Numerous polls are always willing to place this song in the top 3.

Arijit Singh’s Kabira soundtrack is another of his most serene and endearing songs. When it senses the true circumstances of the lyrics utilized in this song, it always causes tears to well up in the eyes. One of the finest things about it is that it is incredibly cool to make the soul replay those wonderful things and stupid fights with a mate. In a few minutes, the most passionate lines are enough to make everyone feel good or genuine.

In this song, the most empathy of love and striving to make the beloved agree is clearly defined by history. Sanam Re is a Bollywood track from the film Sanam Re, which stars Pulkit Samrat, Urvashi Rautela, and Yami Gautam. Many individuals have their emotions intertwined with this amazing music. This incredibly hit song was published in 2016 and quickly became one of Arijit Singh’s catchiest songs. Arijit’s song is totally beautiful and traditional, and it can transport you to another world.

Arijit singh another one of the beautiful songs in the Bollywood flick Ok Jaanu. After the song was released, it made a splash throughout India. It is just Arijit’s might that causes things to stand in a raw state. The Enna tune is eerily similar to actual magic. Everything about this song is fantastic, including the lyrics, music composition, and vocals. It is nothing short of miraculous that this song is consistently trending on several blogs. Enna Sona is unrivaled in a variety of scenarios.

Arijit Singh chose this song because it is beyond the understanding of every element, including the lyrics, arrangement, and vocals. This is the perfect pairing of emotion and message in one song, according to Infect. The poetry-like words and Arijit’s wonderful voice make everyone’s souls melt in this song. If you’re looking for some of Arijit Singh’s most popular songs, this is one of them.