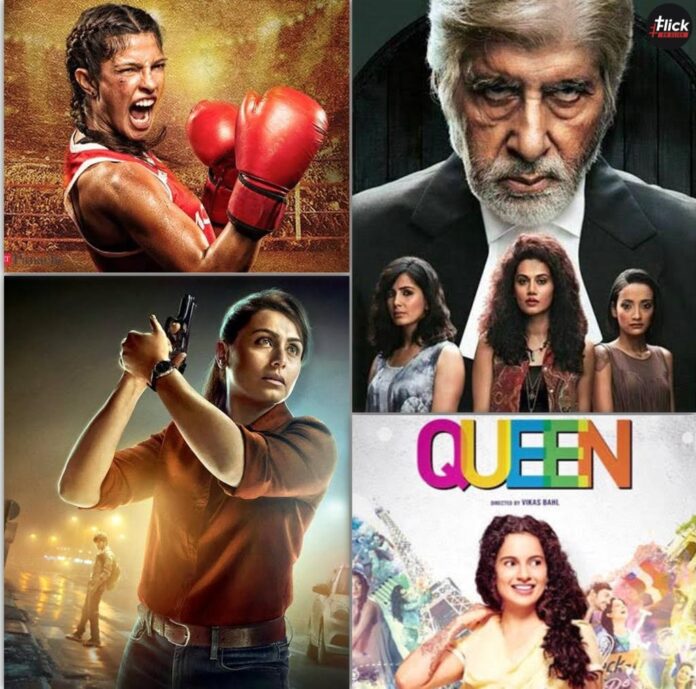 For centuries, Hindi cinema has served as a mirror, reflecting the periods and events that the country has faced. Woman Empowerment has come a great way in our movies, from being decorative things, if not sufferers or martyrs, to being a formidable force. The Hindi cinema actress has progressed from abala naari to a woman of depth and power who stands up for her rights, speaks out against injustice, battles for her pride and self, and rebels when necessary.

Can you make a big issue out of one slap in a culture where even marital rape and serious spousal abuse are considered a family’s “private matter”? Even though she is a completely loving wife, the heroine of ‘Thappad’ does just that. The smack, given at random, serves as a wake-up call, reminding her of how much she has deleted herself to satisfy her husband’s desires. This Taapsee Pannu-starrer, created by Bhushan Kumar of T-Series and produced by Anubhav Sinha. It is a lesson of how oppression numbs women to their shame. And the significance of equality in a relationship.

Queen, a 2014 blockbuster movie featuring Kangana Ranaut as Rani, whose fiancé cancels their wedding since their social level does not match. Rani, who is upset, decides to travel alone to Paris and Amsterdam for her wedding. Initially, she finds it difficult to live with the sorrow and heartache, but as she travels, she discovers that a wedding is not the be-all and closeout. Moreover, her single honeymoon turns out to be a magnificent trip for her. Finally, she returns to India as a strong, joyful, and confident Rani.

English Vinglish is one of the best woman empowerment movies of all time. Moreover, it tells the narrative of Shashi Godbole, a typical homemaker played by Sridevi. It depicts nicely how the woman, who is great as a housewife, wife, and mother. However, she is looked down on and mocked by her child and husband just because she does not speak perfect English. Shashi Godbole, who is hurting, turns things around by learning the language while visiting her niece’s marriage in the United States. Gauri Shinde’s simple story is fascinating, as the woman overcomes her flaws.

Mary Kom is the real fact of an Indian fighter who achieved international acclaim for her country. In the big film, Priyanka Chopra portrays Kom’s real persona, effectively depicting her experience. It is unique because of the difficulties Kom faced during her life. Kom makes a great comeback after her marriage, and as a mother of two, she maintains her successful career despite all odds.

Pink informed the public that when a woman speaks ‘No,’ she means ‘No. She cannot be compelled to do something against her will. Along with, the regardless of the things she dresses or the living she leads. Amitabh Bachchan portrays a lawyer who fights for the girls. who are caught up in a court struggle with notorious lads from prominent families.

Vidya Balan’s 2011 successful movie Kahani, in which she portrays Vidya Baghchi, similarly depicts a powerful woman. Vidya’s persona is looking for her absent spouse. In her final weeks of pregnancy, she journeys single from London to Kolkata in search of her absent husband. As the movie progresses, we get to understand Vidya’s personality even better. She is a patient person who is fearless and has a fantastic sense of irony. Even though she overcomes numerous challenges in her search for her missing husband. Vidya maintains a strong front and eventually succeeds in her goal. Moreover, which is disclosed at the end of the film.

Mardaani, Rani Mukherji’s 2014 criminal thriller smash film, is an excellent example of woman empowerment. Hence, the film sends a message to women to be more like males to solve any form of difficulty in their lives. Shivani Shivaji Roy, a cop in the Mumbai Crime Division, is played by Rani Mukherji. She is powerful, bold, and cop with a decent sense of humor. The movie is about human smuggling, in which teenage girls from all over the nation are kidnapped and forced to work as slaves in the flesh trade. The film demonstrates that a woman must not be regarded as a pleasure toy. Whenever, if the need to struggle for her dignity comes. Therefore, a female can make even the toughest of men swallow the dust.

Chak De! India, a film about female hockey champions, is another outstanding illustration of woman empowerment movies. The film debunks the stereotype that women are unable to understand and participate in sports in the same way that men do. The film, which premiered in 2007, won numerous praises for its uplifting plot. The Picture also focuses on the schisms among the female hockey players. However, in the conclusion all conflicts are forgotten as they come together just to compete for India and triumph in the game.

Previous article
The Dhapa Sisters Vlogs: A Fun and Familiar Watch
Next article
Enlighten your mood with these 10 best Arijit Singh songs of all time
Flickonclick Team

Regardless of the fact that cinemas in India have begun to operate, we saw some exciting and major...
Entertainment