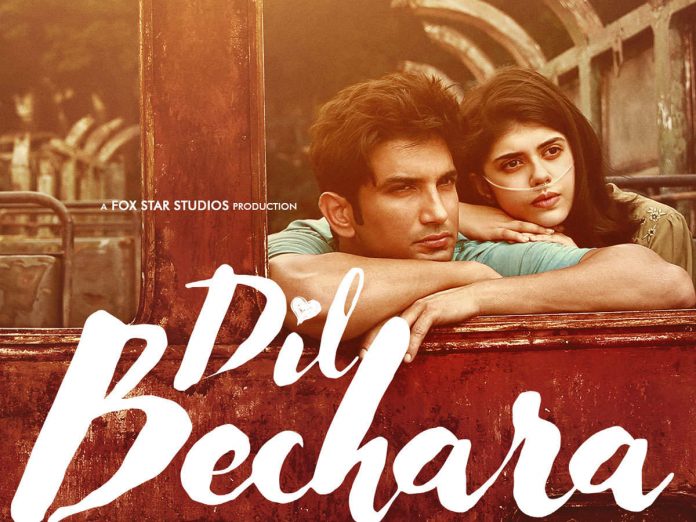 The much-awaited film of the late actor Sushant Singh Rajput and Sanjana Sanghi ‘Dil Bechara’ has finally been released. The last release of the late actor is as mesmerizing and fulfilling as it could get. Thus, manages to give its viewers an idea of why the demise of the young actor will be felt for years to come.

‘Dil Bechara’ movie is an adaptation of the 2016’s best selling novel “The Fault In Our Star”, written by John Green. The new movie also takes major ideas of storyline, screenplay, and acting from book’s Hollywood adaptation with the same name in 2016 met with much critical acclaim.

The movie starts with the portrayal of long societies of Jamshedpur where Kizie Basu lives. Kizie is no normal girl and has already numerous faced life-threatening challenges that would dare the normal ones to live. Kizie suffers from thyroid cancer and as a result, her lungs gave away with her.


But, living life as normalcy, the young teen manages to survive on an oxygen cylinder, which follows her everywhere like a shadow. With rock-solid support from her family and dealing with all negative bleaks of hospital testing. All she craves is a normal girly life: Nightouts, dozing off in bars, making boyfriend, and crushes.

Contrary to her dream and tastes, all she gets is to attend funerals of the dead she didn’t know and therapy sessions, all to accommodate and suit herself with this trebling life. Then a whisper of goodness is what she hears and lands upon her new life; college life.

Here comes our hot-blooded character Immanuel Rajkumar Junior or Manny (Sushant Singh Rajput). The charm of the college and the guy that could make every girl fall for him, meet this introvert girl, first at college freshers, followed by another meeting at the cancer support group.

Here, Kizie comes to know that behind all this livelihood of our Manny is his problems. Manny has survived osteosarcoma and his cancer is currently in remission. Connecting to life-taking conditions, the two youngsters eventually fall for each other’s nature: the witty boy and the shy girl.


The cutesy bonding deepens as they explore life on the roads on Jamshedpur on his scooter. The two come across each other’s path of feelings, love, and mutuals which lands a role in shooting for Manny’s friend, Jagdish Pandey (Sahil Vaid). Jagdish has only one dream for himself: Direct a film before losing his eyesight to cancer.

When Manny decides to fulfill the lifelong dream of Kizie to meet her favorite musician, Abhimanyu Vaid (Saif Ali Khan), she realizes she has fallen for Manny. Going to Paris on ‘Make A Wish’ and seeing the best until they could do, the two love birds do not know what a tragic twist in the tale awaits them.

It may sound boring and predictable, but the trio does make a nuisance worth remembering. The uncannily funny vibes of Sushant added with blind friends who also want to have a girlfriend and the girl next door who is shy and unfriendly but not to these two.

Sushant’s vulnerable, witty, sensitive, and energetic aura brings a shine upon his way of the lead role. His one-take song delivery on the title track ‘Dil Bechara’ is as good as he was. Sanghi, who is debuting with the film, gives an assured and confident justice to her character.

Supporting cast: Swastika Mukherjee and Saswata Chatterjee (Kizie’s parents), Sahil Vaid, and a notable cameo from Saif Ali Khan adds the remaining flavors. The film is a lot of emotions and unravels some of the best moments on screen for a rom-com movie.

It may take a strong heart to control your emotions while watching the 32-year old actor’s astonishing acting and some of the scenes which would make you fill with tears. And yes, they will. Do watch ‘Dil Bechara’ and witness the last act of Sushant Singh Rajput. And notably, one of his best yet.


Previous article
Here are top 10 Bollywood Movies with the best climax
Next article
Why Everyone Is Talking About Netflix New Show ‘Indian Matchmaking’?
Flickonclick

Bollywood has special means to make a place in our lives, and it surely has enough ways to...