Television is the menace that everyone loves to hate but can’t seem to live without. We can’t agree less on this one right? In this lockdown apart from your OTT series one more thing our dads have made sure to catch up is news, and honestly, we can’t even ignore it, or do we have a choice?

As per our observation for Indian news media, only 5% of what we want to know is shown on the tv, otherwise what benefits the backend is visible.

On the recent demise of Sushant Singh Rajput aka on-screen Dhoni on 14 June has left the Bollywood in shock and more importantly the fans of the actor. Indian television news channels otherwise cover everything that is trending on twitter but to some surprise, nothing is spoken on the actors’ case. Various hashtags keep on trending like #SushantSinghRajput, #CBIEnquiryForSushantSinghRajput, and the very recent campaign started by Shekhar Suman #justiceforSushantforum and still no coverage on the television. 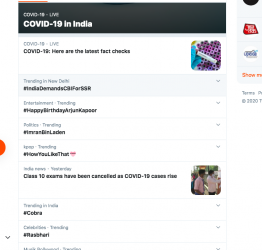 It is believed that what is shown on tv especially in India is believed then why Indian media is not keeping forward the netizen’s point of view to the people? Thousands of tweets are not fetching any media’s attention? Why not?

The entire twitter army of SSR’s fan is trying hard to get to some point where they seek more updates on the actor’s case but not even a single news channel feels it important. Thousands of cases have been shut on the note of ignorance in the country and Indian media cares no less to shut even more.

Repeatedly showing one news on the tv is a regular technique of the channels and what for a good TRP but who in the media will explain to them that you are the fourth pillar of the democracy, you hold great significance for the nation’s growth and help people in their reach.

NEWS CHANNEL ON THE BASED OF POLITICAL PARTIES

Another observation would be split off of news on the basis of political backgrounds, Two-three channels support one political party and one or two another. Who will understand that citizens are done with the rebels in the oppositions but we seek genuine growth of the country as a whole? We don’t want you to blame each other, we want accountability, news channels can be free from all the prejudice only when their focus is to deliver fair otherwise this country will have endless spins in the upcoming future.


The country is suffering already by the outsiders then why to make your own people your enemy? The Indian television holds power and that power needs no acknowledgment but surely exercise of the power in the right manner would be inherently appreciated.

We seek more authenticity by Indian media, more generosity by the people who can. Being responsible not only means telling the truth, but also abiding by the law and being honest in the way a journalist gathers information. If the press drifts into law-breaking, then it loses the respect of its readers and the nation. But if it breaks people’s trust it loses the entire purpose of the media.