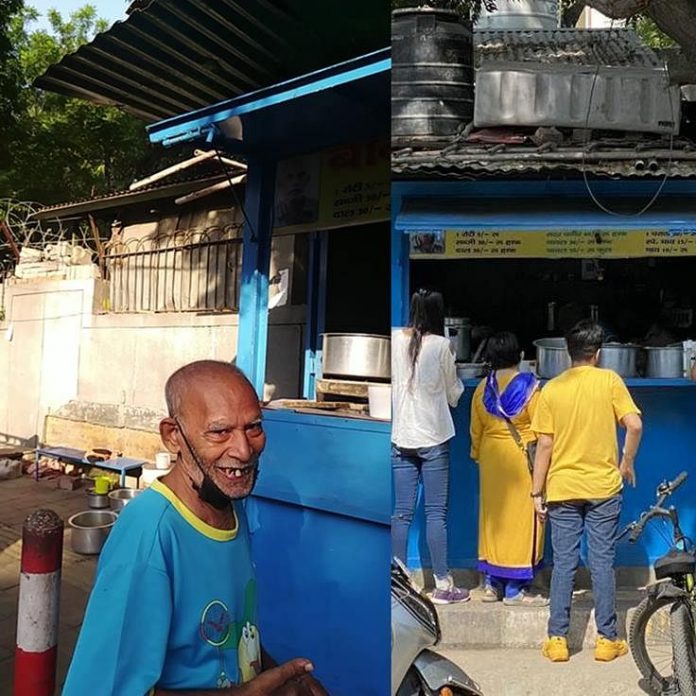 Social media has been criticized a lot lately but it worked as gods’ hand in the life of Baba ka Dhaba trend famed Kanta Prasad and family.


The stall which was on the brink of closing down, received a massive amount of customers after the video featuring Kanta Prada went viral and now they don’t have tome to even stock up.

For those who are not aware of the full story, it goes like this. In Malviya Nagar, a man and his wife going by the name Kanta Prasad and Badami Devi used to earn their daily bread by running a stall named Baba Ka Dhaba. Selling all kinds of breakfast and meals, they would save up a little.

But during the last six months, their business which was not running wild before broke down even more. The 80-year-old couple would not even sell a bare minimum to survive.


Then came a twist in their story as a YouTuber whose handle goes by the name @YoutubeSwadOfficial reached out and decided to offers some help. He made a video introducing the couple and put forward all their problems in the 11-minute long video.

The video went viral, with everyone sharing it. Then twitter caught the hang of it and started the retweets, hashtags which led to #babakadhaba hashtags become trending for the day.

Now, those netizens who are only considered good enough for trolling or punching down on someone with a bad taste lately actually did something nice. They make sure the video receives maximum support.

Well! The rest is history and the next day when Kanta Prasad went to his shop at his usual time. He found that people were already waiting outside in order to taste the food prepared by them.

#WATCH: "It feels like whole India is with us. Everyone is helping us", says Kanta Prasad, owner of #BabaKaDhabha.

The stall in Delhi's Malviya Nagar saw heavy footfall of customers after a video of the owner couple went viral. pic.twitter.com/nNpne6Arqs

Now, the surprising couple along with their son who came in as additional help started preparing for the crowd and were flooded with more crowd as the day passes.

They are not very high on the food standards but whatever they cooked looked good and were enough to gather praise from the incoming crowd. This story made a mark on many minds and is a live example that everyone can help if they want to.

Currently, Baba Ka Dhaba is featured by other YouTubers, News Channels and people still come from far across to eat and offer their help. The overnight 80-Year old star now has a constant smile on his face now that he has been saved due to the love that the public threw at him.

Foods To Avoid Bloating in Stomach And Their Alternatives

Bloating in stomach occurs when our stomach has swollen up or enlarged after eating. It might not be...
Fitness

Weight loss has a lot to do with exercising and physical activities but weight loss also is significantly...
Lifestyle

9 Best 5-Star Hotels in Delhi for a lavish experience

Red Meat: Everything you need to know about Red Meat

A recent report by the medical journal 'The Lancet' said that consuming Red Meat may not be that...
News

With Diwali just around the doorstep, city markets are brimming with activity. The roadways in Delhi appear to...
News

Visual marketing is here to stay. After all, articles with more images get more shares on social media...
News

Food delivery is the new normal, which is why most of us prefer to dine in on a...
Lifestyle

Myths and Truths About Dining After 9 p.m. that you must know

Many people are concerned about gaining weight if they eat beyond a certain time. One typical recommendation is...