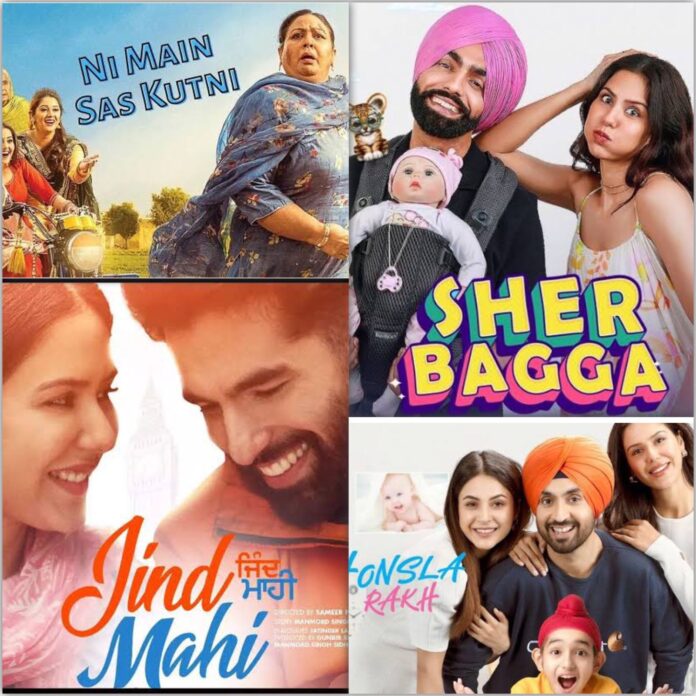 Punjabi comedy movies are notorious for packing a lot of bombs, and this year has been no exception. Some excellent films that were both intelligent and thought-provoking were released. The Punjabi-speaking North Indian cinema sector, on the other hand, has repeatedly demonstrated that all you need to wow an audience is a good piece of what they most connect to. Previously assumed to be lost, Punjabi film has blossomed into one of India’s most exciting industries. Whatever category these films are from, they are all filled with great humor and timeless storytelling. Punjab’s past and unique culture draw many people from all over the world, which is represented in their movies.

Here is the list of the latest Punjabi comedy movies that will make you laugh out loud.

Sher Bagga is one of the best Punjabi comedy movies that just can’t take your attention off. It not only brings happiness, but it also takes you on a ride that you wish would never end. Another appealing aspect of the plot is the constant introduction of a mystery element. It disrupts the story’s flow to improve it. Sher Bagga contains adorable romance moments, comedy, laughter, and emotions. Along with the love narrative, the movie underlined the value of friendships. Sher Bagga is an all-around entertainer who will provide the audience with a delightful light-hearted movie experience.

A comedic plot that focuses on the family, with a star, two lovely girls, and an adorable, brilliant child, is an excellent choice of the script that delivers the promised enjoyment. Fortunately, Honsla Rakh makes the most of the chance and completely utilizes all four features, living up to the high hopes and providing a highly entertaining movie. It follows the customary formula of starting with a song and then taking its own sweet time to reveal the premise and important characters, produced by Amarjit Singh and stars Diljit Dosanjh, Shehnaaz gill, and Sonam Bajwa in major roles.

The Punjabi comedy Saunkan Saunkne, produced by Amarjit Singh Saron, scripted by Amberdeep Singh, and featuring Ammy Virk, Sargun Mehta, and Nimrat Khaira in major roles, is about a guy torn between two beautiful wives. Naseeb Kaur (Mehta) and Nirmal (Virk) are a husband and wife who have been attempting for years to have a baby. They go to babas and doctors, use black magic, and do whatever they could to have a kid, but to no effect.

Aaja Mexico Challiye is a story about anyone who wants to travel overseas to forge their personality, earn money, make their parents happy, and live a better life. In this rat rush, many people fall prey to false agents and are gradually driven down the route of undocumented immigrants. Because obtaining a direct visa is difficult, the immigrants go by donkey and pay a high price for the privilege. Moreover, the movie has some comedic scenes that will keep you engaged. Aaja Mexico Challiye featuring Ammy Virk in a major role is worth seeing because of its effort to showcase the challenges of illegal migrants and their stories. We could readily tie the film’s story to all the stories we had heard around us while viewing it. As a result, we’ve designated Aaja Mexico Challiye as a ‘Must See.’

A brilliant medical intern (Mehtab Virk) opts to wed his first love Sirat (Tanvi Nagi), also a medical student, despite the intentions of his authoritarian mother, and is assisted in this quest by other relatives. In Fact, to express her rage over her son’s choice, the mother devises schemes to make her daughter-in-life law’s unpleasant. But, unlike previous lame daughters-in-law, this new bride decides to pull her saas (mother-in-law) and set her straight in a subtle manner. Ni Main Sass Kuttni is one of the latest Punjabi comedy movies that is definitely a one-time watch.

Jind Mahi is the latest movie from the Punjabi cinema industry. Sonam Bajwa and Ajay Sarkaria play the key roles in the movie. Sonam and Ajay previously appeared together in the Punjabi film Ardab Mutiyaran. They’ve now teamed up for Sameer Pannu’s filmmaking debut. Jind Mahi is inspired by Sonam Bajwa and Ajay Sarkaria’s surprising and truly wonderful love story. While Ajay portrays an urban gentleman from the UK who is wealthy and leads a difficult life. Sonam Bajwa, on the other side, portrays a typical ‘desi’ Punjabi girl.

Sohreyan Da Pind Aa Gaya is a new Punjabi rom-com drama starring Gurnam Bhullar, Sargun Mehta, Jasmin Bajwa, and Jass Bajwa in major roles. It is centered on the angry love tale of Raja (Gurnam) and Rupi (Sargun). Raja persuaded his family to discuss marriage with Rupi’s father. However, Rupi accepted to marry another man since she confused him for Raja. Furthermore, the guy turned out to be Raja’s cousin brother. This misconception causes a schism between the characters since Rupi swore she would not allow Raja to date any female from his village. There isn’t a single quiet moment in this film, and it will keep you amused from start to finish.

Mahi Mera Nikka Jeha, features Pukhraj Bhalla and Hashneen Chauhan in main roles, with Jaswinder Bhalla, Anita Devgan, Honey Mattu, Sukhwinder Chahal, and Seema Kaushal in key bit parts. The plot centers around a mother who is fed up with her partner’s short stature and has resolved to locate a handsome and tall guy for her kid (Hashneen). But finally, the young girl becomes infatuated with a short-heeled boy (Pukhraj Bhalla), and the movie is all about how their romantic drama battles to succeed. Mahi Mera Nikka Jeha by Pukhraj Bhalla and Jaswinder Bhalla is a must-see for all admirers of this father-son team.

Read More: Top movies of Kiara Advani you can binge on this weekend

Nicolas Cage is a highly acclaimed actor who has appeared in numerous movies throughout his career. Throughout his...
Entertainment

Watching a good Bollywood murder mystery in a cozy atmosphere at home is always a treat. Murder mysteries...
Talent

Deepika Padukone is one of the top actresses in Bollywood, and she is probably the most sought-after Indian...
Entertainment

Best Movies Portraying Schizophrenia: Depicting medical conditions in movies is always a great task for the director and...