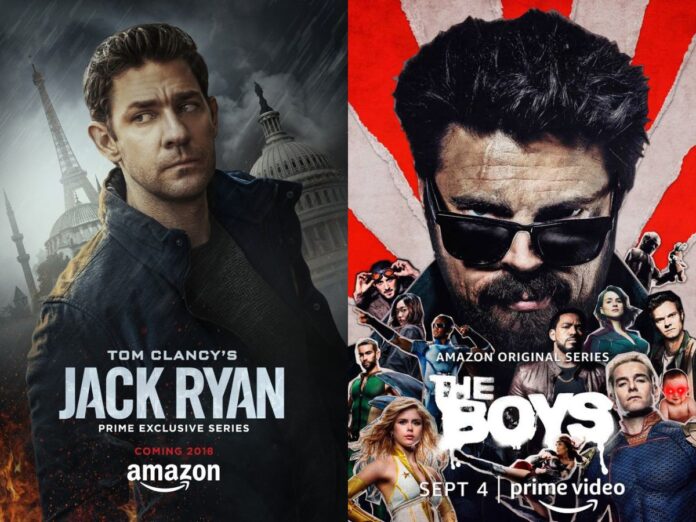 Starring John Krasinski in the titular role, Jack Ryan is a Hindi dubbed web series on Amazon Prime in the thriller genre. It is about Jack Ryan, an up-and-coming CIA analyst who is thrust into the world of crime and terror. He must use his brain as well as his physical skills to not end up dead in this web series.

The Boys is probably the most popular and the best Hindi dubbed web series on Amazon prime Video right now. It is about a superhero organisation which actually has evil motives at its heart. If you still haven’t watched this masterpiece, you are missing out on a lot of fun.

One of the best horror Hindi dubbed web series on Amazon Prime Video, The Purge, has an interesting premise that any horror lover will certainly find fascinating. The series is an alternative reality in which all crimes are legal for 12 hours in America.

Another horror web series with thriller and mystery elements, The Terror, is based on a true story. The web series follows the story of the British Royal Navy voyage as its crew goes through the harshest conditions and horrific times.

Another brilliant Hindi dubbed web series on Amazon Prime Video, Treadstone is about the meta mechanisms used by the CIA to turn their recruits into highly efficient assassins. The show is praised by critics and viewers and is certainly a must-watch for its interesting premise.

Filled with action and martial arts, Into the Badlands is perfect for those who love action-thrilling dramas. The show centres on a martial artist genius and a young boy who search for enlightenment and face off against many powerful enemies during their journey. I highly recommend watching this Hindi dubbed web series on Amazon Prime Video.

The spooky name of this web series may have already alerted you that it is a suspense thriller. Nine Perfect Strangers features Hollywood actress Nicole Kidman and follows nine people who experience mysterious things at a wellness resort.

One of the highest-rated romantic dramas on Amazon Prime, The Affair is a sensual show with a great storyline and almost perfect narrative. You must have already guessed by the name that the affairs among married people are the core focus of this Hindi-dubbed web series on Amazon Prime Video.

An animated superhero web series that is being highly praised by the anime community, Invincible is now available in its Hindi dubbed version on Amazon Prime. The series follows the son of a superhero who must prove his worth and become the superhero that the world needs.

One of the greatest shows of all time, Mad Men, is television’s peak in storytelling. Now, it’s one of the best Hindi dubbed web series to watch on Amazon Prime Video. Donald Draper tries to maintain a balance between his vacillating personal life and his extravagant professional life in the 1960s. Jon Hamm is phenomenal in this web series.

On the 12th of August, 2021, the much-anticipated biopic  'Shershaah' on late army officer Vikram Batra was released...