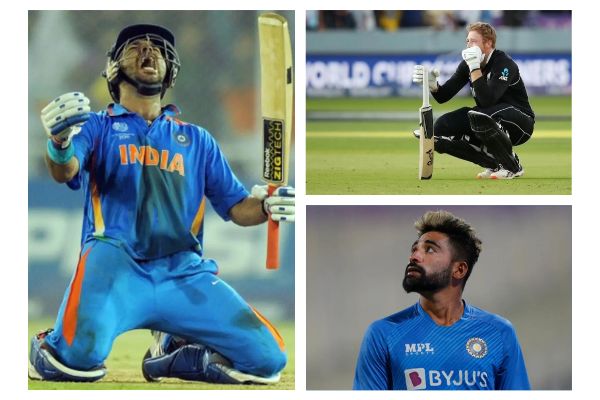 Here are the 10 cricketers with inspiring and struggling life stories: The Indian pace star who became a key bowler for India in the epic victory against Australia at Gabba has never really gone to a cricket academy for coaching. His early life was filled with hardships as his father was an auto-rickshaw driver. Mohammed Siraj is a self-taught cricketer who found success only after one of his friends invited him to a cricket club, where he impressed the coaching staff and ultimately bagged the chance to play domestic cricket.

The stylish and destructive left-handed batter for West Indies had fractured both his legs at the age of 19 in a horrible accident. The doctors told him that he would never play cricket, but his determination and hard work proved them wrong. He smashed his way out of the hardship and made an epic comeback. Currently, he is named as the West Indies captain in the game’s limited overs format.

The man who made the dreams of a billion Indians come true fought extreme pain to achieve that glory for India. The player of the match for India in both World Cup victories in the 21st century suffered from cancer at the peak of his career. It was believed that people had seen the last of Yuvi in the 2011 World Cup, but he made an epic comeback after cancer and played for India in the Champions Trophy 2017.

The left-handed opener for Kiwis was a force to reckon with. He was attacked outside a bar in 2013 and was left bruised and battered. He was in a coma for more than 56 hours but returned back to his glory and smashed a hundred in his returning match for New Zealand.

Mathew Wade is a cancer survivor like Yuvraj Singh. The tough wicketkeeper batter was diagnosed with testicular cancer at the young age of 16. He endured several chemo sessions to live his dream of playing cricket for Australia.

The young left-arm pacer has quite a similar story to Mohammed Siraj. His father was also an auto-rickshaw. Sakariya was helped by his uncle in achieving his dream. He worked at the stationary shop of his uncle to earn money and use that to play and learn cricket. He dreams of representing India in the World Cup. Martin Guptill is one of those cricketers who have taught us never to give up when facing adversity. The opener for New Zealand has only two toes in his left foot. He suffered a tragic accident when he was 13. However, he trained himself to balance firmly on two toes and acquire an attacking play style.

The world’s fastest bowler was feared by almost all the batters of his generation. However, many people might not know that Shoaib had the unique ability to rotate his joints up to 42%, which is much higher than the normal 20% for common people. This ability of him became both a blessing and curse for him as he could bowl faster than others but constantly suffered from injuries. Despite that, he always made a comeback and retired only when he wanted to.

The former Australian pacer battled a disease that is almost a career-ending sign for a fast bowler. Still, he never gave up and lived his dream until he could. His right knee requires a cleanout to remove fragments of bone due to an injury that he suffered in his early life. It was routine for him to get his right knee cleaned up after a day’s play.

The lethal left-arm pacer for Pakistan was a key player in their World Cup victory in 1999. Akram was diagnosed with diabetes in 1997, but it never stopped him from being the most deadly weapon for Pakistan on the cricket field. There was a time when he could not play a match without consuming medicines.