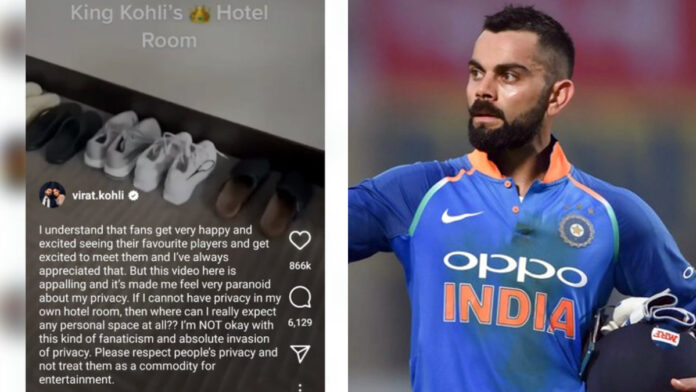 A fan breaking into Virat Kohli’s hotel room and filming his possessions has generated various debates about celebrity privacy and where the boundary should be drawn. Virat Kohli blasted a fan who intruded on his privacy and invaded his hotel room in Australia, where India is competing in the T20 World Cup. Kohli stated that he is not good with such enthusiasm and advised fans to honor the players’ privacy rather than treating them like commodities.

Virat took the matter on to social media and said:

For the uninitiated, Kohli rushed to Instagram earlier in the day to show footage of his clothes and things that was supposedly shot by a ‘fan’ while he was away and afterward posted on social media. The former India skipper was outraged by the acts of the “fans” and demanded that his privacy to be honored.

Virat took the matter on social media and said that “I understand that fans get very happy and excited seeing their favourite players but this is appalling” and further described the incident to be a kind of fanaticism and absolute invasion of privacy”.

”But this video is horrifying, and it has made me very concerned about my privacy. If I can’t have privacy in my own hotel room, how can I expect to have any personal space at all?”

“This level of fanaticism and breach of privacy does not sit well with me. Please respect people’s privacy and do not use them for entertainment purposes.”

Anushka Sharma, Kohli’s wife, also shared the story on Insta. “I’ve had a couple of occasions where fans have shown no sympathy or grace in the prior, but this is by far the worst.” An awful shame and abuse of a human being, and anyone who observes this and says, ‘Celebrity ho, toh deal karna padega (If you’re a famous actor, you have to deal with it) should be aware that they are also a part of the issue.

The fan-filmed Virat Kohli’s personal stuff, his kit bag, drove to the bathroom and even accessed the almirah on the tape before the hotel employees arrived. Kohli and his teammates have been in Perth for the last several days in preparation for the game versus South Africa.

Australian batter David Warner, as well as celebrities Varun Dhawan, Parineeti Chopra, and Dino Morea, among others, called the situation “awful” and couldn’t understand what they were witnessing.

The terrible occurrence occurred a day after India’s defeat to South Africa at Perth Ground. This was India’s first defeat in the current T20 World Cup after winning the first two games over Pakistan and the Netherlands.

A few things that immediately spring to mind are: Who shot the video? How did the fan get into the room? How did the hotel administration allow outsiders inside the room? Also, are the hotel officials engaged in the incident?

There are no instant answers to these queries, but Crown Towers apologized to the famous Indian batter on Monday and told him that the issue was being investigated.

Crown is undertaking an inquiry with the third-party vendor and will take any additional steps required to make sure that such an occurrence does not occur again.

Do you ever randomly wonder how much percentage cricketers like Virat Kohli and MS Dhoni got in their...
Talent

As the popular quote goes, a woman's support is crucial for every man's success. It may be their...
Entertainment

As the popular quote goes, a woman's support is crucial for every man's success. It may be their...
Entertainment