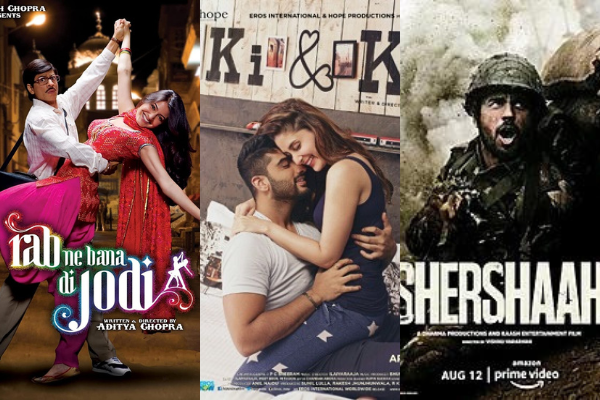 As we move ahead and evolve, the movies we watch these days are also becoming a reflection of our transformation. Bollywood movies are becoming endearing because of the bang-on chemistry shared between the on-screen couples. The charm and understanding of these reel-time couples are becoming a medium to spread the message about various aspects of life in society.

Bollywood surely has a huge impact on our society, and couples with engaging on-screen compatibility are a way to make this impact bigger. With these duos breaking the stereotypes and norms of the patriarchal society, some movies show these married couples in a way that is like a breath of fresh air.

Here is a list of 10 Bollywood movies that show amazing chemistry between married couples:

This Bollywood movie brings out a new pairing of Varun Dhawan and Anushka Sharma as a couple who come together to establish their own clothing business after their age-old family business was shut down, bankrupting their family. In the attempt to revive their self-respect by starting this new business, the movie throws light on the wonderful understanding and equation shared between the couple to work together through the hardships and create a mark for themselves in society.

The movie with the enigmatic real-time couple that came in together on screen to show their reel time connection in this sports drama had Ranveer Singh and Deepika Padukone. 83 was the biopic of Kapil Dev and the journey of the Indian Cricket Team led by him as the captain in the year 1983. The equation established between these two throughout the movie was surely an inspiration for the partners out there to have each other’s back through all the ups and downs they face in life.

The movie set in the 90s shows Ayushmann Khurrana as a husband who lives in an illusion of outer beauty as the ultimate source of happiness in life. With Bhumi Pednekar starred as his wife, she initially fights to create a mark in Ayushmann’s life while struggling with her obesity which comes as an issue in establishing her importance as a good and capable partner in his life. The movie then beautifully shifts with their love that slowly brews and gets in the heart of the audience, with Ayushmann Khurrana finally realizing that it’s the inner beauty and efforts of the person that genuinely make them attractive and accomplished in life.

One of those Bollywood movies that did not show the marriage between the couple but focused on a relationship beyond the idea of marriage. The power-packed couple of Siddharth Malhotra and Kiara Advani was successful in turning heads with their fresh chemistry and understanding of the priorities and duties of a partner for their nation, with the other one standing strong next to them through it all.

This family drama tickled our funny bones and broke stereotypes with the message and story it came across with. Breaking the age barrier, a middle-aged couple, Gajraj Rao and Neena Gupta, conceiving a baby, show a connection that is not only charming but wholesome on many levels. From fighting the disappointment of their sons to the tantrums thrown by their relatives, the couple makes their way to be there for each other, making us look for love and partners like these in real-time.

This family-comedy drama worked its way through the audience by showing a marriage that had its fair share of flaws and issues between Neetu Kapoor and Anil Kapoor. This couple that never seemed to age old, showed their on-screen magic by throwing light on how they deeply understood each other despite the hardships faced by them in their marriage.

This romantic comedy was a pure hit with the King of Love, Shah Rukh Khan as the shy husband trying to live up to the expectations of Anushka Sharma, who ends up being his wife due to unforeseen circumstances. The shift in their relationship from an uncomfortable one to something that the two started appreciating because of the consistent efforts of SRK, made us fall for him even more.

This movie followed the journey of Kareena Kapoor Khan and Arjun Kapoor, challenging the roles given to them by society by reversing them and breaking the stereotypes by doing the same. With a man taking charge of the household work by staying at home to a woman going out as a working professional, this movie showed the bond of a couple with a supportive husband who isn’t put down by how he is viewed through the lens of the conventional society.

This comedy-drama brings out the vibrant energy of Vidya Balan as an emerging radio jockey. The hardships she faces while trying to be successful are shown beautifully with her on-screen pairing with the charming Manav Kaul as her partner. From him being apprehensive about her new job in the beginning, to finally accepting her with all his heart by seeing the way she loves and does her job makes him stand for her and be supportive of her in every decision she makes.

When it comes to Bollywood movies, there is no shortfall of films that are so nonsensical that only...
Talent

Uunchai Movie Review: The beautiful bond of friendship is wonderfully explored in this emotional and inspiring movie. All...